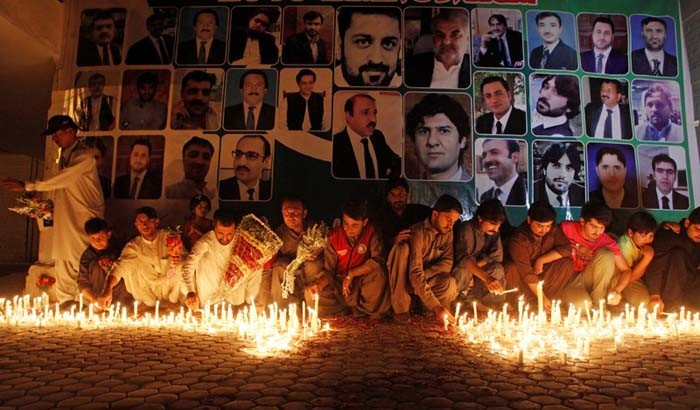 Nearly two weeks on, Quetta still wears a gloomy look after the August 8 suicide blast in Sandeman Provincial Hospital that claimed 77 deaths, including 56 lawyers. Many bright young lawyer leaders died in this attack; their chambers have yet to become fully functional. One reason the lawyers’ chambers have not started functioning is the scores of injured who are under treatment in Karachi’s Aga Khan Hospital, looked after by their colleagues.

Police have been unable to find any clue that may lead them to make arrests. Intelligence agencies whose representatives are also included in the Joint Investigation Team, led by a police officer Zahoor Khan Afridi, are trying to tap the local facilitators who are said to have brought the bomber to hospital and later slipped away when their plot was executed. CCTV footage spots some suspects who had covered their faces. Some government officials are of the view that if any of the facilitators of the attack or bomber’s accomplices are nabbed, it may help the agencies track down the terrorist gang .In the wake of killing of Principal Law College Amanullah Achakzai on June 8, the intelligence agencies had received some information that suggested threats to government/security agencies’ officials during their movement.

Despite a threat alert issued by the home department of government of Balochistan on June 29, 2016 to all aligned departments, the police and security/intelligence agencies failed to comply with the directions. After receiving the letter, the secretary Health forwarded it on July 13 to all government hospitals including the Sandeman. Later, through a letter on July 29, the Medical Superintendent of the hospital where the suicide blast took place, also shared information with all heads of departments of the hospital, asking for strict security measures.

Yet, neither the district administration nor the police or any intelligence agency remained mindful of any possibility of a terrorist attack. A prominent figure Bilal Kasi, President of Balochistan Bar Association, was gunned down and even then no security measures were made in and around the hospital where his dead body was brought for autopsy that drew the lawyers in huge numbers.

As a formality, the police have registered the case on behalf of SHO Civil Line Police station under terrorist and explosive acts against unknown culprits. A Joint Investigation Team (JIT) is set up led by SSP investigation with officials from different police departments and intelligence agencies as members.

"The JIT has started its investigation from different angles, doing the spade work by collecting evidences from the crime scene and obtaining CCTV footage of minutes before the suicide blast showing the suspected bomber," says Abdur Razzak Cheema, DIG Quetta while talking to TNS.

The Home department of government of Balochistan issued a threat alert on June 29, 2016 to all aligned departments. The police and security/intelligence agencies failed to comply with the directions.

Police also claims to be closely examining the explosive category of the blast, the bomb disposal squad experts have weighed it 5-8 kilograms, mixed with ball bearings and splinters. Some police officials, who spoke on condition of anonymity, think that even though the explosive weight is estimated at 5-8kg, it caused much damage to both life and property because of the addition of a chemical that increases its intensity. "It could have contained potassium nitrite, but it needs to be investigated," they say.

The blast was so intense that the body of the suicide bomber was blown into pieces and even his face was disfigured. He is said to be under the garb of a lawyer, wearing shalwar kameez with black coat with a file in his hand, as identified by the police and lawyers in the CCTV footage from the hospital. Police found only his skull’s skin that has been sent for DNA test to the forensic laboratory in Islamabad where it normally takes a couple of months before the final report is out.

"In every such incident, under the normal procedure, the body parts of the suicide bomber are sent for DNA test -- to get genetic information for their profiling and to be matched with those (bombers) who had carried out suicide attacks in the past, to determine whether they have any blood relation with each other for identification purposes," says Razzak Cheema. He says the statements of nearly over 50 persons, present at the time of blast or before it including the injured, have been recorded to find any clue regarding the perpetrators.

The CCTV footage of a number of cameras installed at different points in the hospital has been obtained, and is being examined minutely and carefully to find clues that may help the JIT in investigation.

Police officials do not fully agree with the opinion that the Sandeman hospital incident shows that terrorist groups like ISIS or TTP have shifted their activities to Balochistan. "We cannot say with certainty whether these groups are present in Balochistan or it is their sporadic act unless we find concrete evidences," says Cheema, DIG Quetta.

He thinks that since Daesh is on the back foot in Syria and Iraq and so is TTP in FATA, "it is hard for their operators to shift their bases to other parts of the country after being defeated in FATA in the wake of Zarb-e-Azb. ISIS or TTP may find soft targets like they did in the Women University, Shia pilgrims, Hazara population, hospitals and even lawyers".

There has been a strong nexus between Lashkar-e-Jhangvi and Tehrik-e-Taliban Pakistan in the deadly bomb attacks on various places like the military air base and Quetta airport, Frontier Corps’ senior officials, police, Shia pilgrims, women university, Bolan Medical Complex besides targeting police personnel and members of Shia community. In these attacks, foreign nationals like Uzbeks, Tajiks and Chechens have been used as suicide bombers.

For the first time, an Uzbek woman suicide bomber detonated her explosive jacket at the Sardar Bahadur Women University in June 2013 and later her husband with same origin blew himself up along with another bomber in the nearby Bolan Medical Complex when injured were taken to the hospital.

Police investigators deny that all the suicide attacks in Quetta have remained untraced and complain that the media does not highlight the progress made in the cases. "In almost all such suicide attacks, the terrorist groups have been identified and their facilitators have been either arrested or killed in encounters," says SSP investigation Quetta. "Just two incidents of Sandeman Provincial Hospital of April 2010 and Meezan Chowk in September the same year have remained untraced," he adds.

Usman Saifullah Kurd, who headed most of LEJ’s operations both in Sindh and Balochistan, was killed in February 2015 in a police encounter while his associate Mahmood Ur Rahman Rind, the head of Jaish Ul Islam, was also gunned down after an information-based operation in the outskirts of Quetta.

He says that after the killing of Lashkar-e-Jhangvi leaders and their affiliates, terrorist attacks have decreased in Quetta to a great extent.