Horror or Honour? Sadiq Saleem shares his experience of working with Frieha Altaf and gives a sneak peak of the drama behind the glitz and glamour of Pakistan’s biggest events 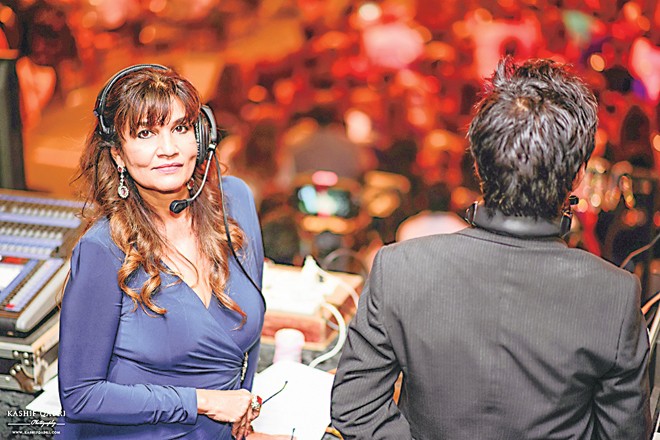 If you think of the high priestess of fashion in Pakistan, Frieha Altaf will be your only option. She may be known as a dragon lady, but she’s also an encyclopedia on celebrities, styles, high profile events, trendsetting clothes and the bodies that wear them. Her voice can be chilling yet soft and is accompanied by an upward inflection that will hint at her cool demeanor with invisible wings of infinite power.

From the girl-next-door in the iconic Moin Akhtar-starrer Rozi, Altaf has come a long way through a journey marked by numerous achievements, and one that involved a lot of blood and sweat and maybe even tears. For a woman who is self-made and has made many careers in her rise to prominence, she has almost turned herself into an icon of modern Pakistan, an image of a woman who is successful, glamorous and wields a power that’s very difficult to achieve in a patriarchal society like ours.

This multifaceted woman has inspired many during her enviable professional journey and as I complete my thirteen years of voluntarily assisting Frieha (whom I fondly call the ring master) in different aspects of event management, I thought of sharing a mix of what she has taught me over the years; what actually happens in the background while the artists take over the stage and what I get to hear through that magical gadget called ‘clear-com,’ which her team managers wear on their ears to follow her instructions. Here we go.

My admiration for Vaneeza Ahmed got me into the field of entertainment journalism and I was told by someone that working with Frieha could turn this dream into reality. I still remember it was June 2004 and I was visiting her old office on Zamzama. I went without a resume and as luck would have it, it was the first thing she asked me to share. She sent me back and said, "come to me only when you know the basics of an interview". Next week I went to see her again with a closed collar and three copies of my resume in hand.

She always starts the show by reciting Bismillah. I have assisted her in more than twenty shows and I can’t recall any show that she started without reciting Allah’s name. It’s perhaps also why her shows always turn out to be a success.

There is so much going on stage and so much falling into one’s ears due to the constant talking on clear-coms that it is practically impossible to remain focused. Tapu Javeri, who was one of the presenters at the 12th Lux Style Awards, had gone missing just before he was due on stage. I was on one of the clear-coms and without asking Frieha, I told one of the backstage managers to send Ayesha Omar instead. Frieha immediately intervened and said, "No you can’t send her. She is a Capri Girl." That year, Ayesha was endorsing another soap brand. And in Frieha style she shouted, "…And I am the Director of the show, not you!"

Finish What You Start:

Not many people know this but Frieha’s job doesn’t end until the emcee closes the show. She ensures that all the artists who fumbled or goofed up on stage, or all the dances that went wrong are reenacted so that the final product that goes on air is without any flaws.

We all remember Urwa Hocane’s notorious slip on the LSA stage last year. Those who were on the clear-com were shocked not because she had slipped, but because Frieha had just questioned the backstage managers on the clear-com that "Why was Urwa wearing shoes since she might fall because of her steps and the slippery stage." The next thing we know, Urwa was on the floor. To save her from mockery after the show, Frieha put up a video praising Urwa on how bravely she finished her performance despite the fall.

The three Cs in her life:

Frieha holds dual nationality and also teaches fashion as part of the visiting faculty in one of Canada’s fashion schools. It’s not difficult for her to settle abroad yet she is striving day and night to bring Pakistan’s fashion on the world map. Catwalk Production has been going strong for almost 25 years now because of her single-minded pursuit of the superlative. And we all know how much she loves her children. To her, the priorities are very clear. Her famous Three Cs: Country, Company & Children.

In one of the Lux Style Awards, the DJ for the event had messed up the songs. The hall was packed and the final show was at stake but she did not lose her cool on the podium. She kept ‘requesting’ the DJ by repeatedly saying, "Please don’t do this to me". He thankfully found the right CD and the show went back to its pace. Had she raised her pitch at the time, it would have affected both the show and the DJ’s confidence. Of course, the first thing she said after the show ended was "I will not pay you a single dime!"

As they say, nothing skips the master’s eye. Year 2011, at the PFDC fashion show, she had just walked in to the venue and just by taking a glance at the ramp she uttered "Yeh ramp terha hai" (This ramp is tilted) even though to me it looked as straight as an arrow. But then Frieha’s observation could not be ignored too. The contractor got a rope to measure it and to my surprise it was off by few inches. She knows her craft inside out.

Let your work speak: Some may not agree with me but Frieha doesn’t like to promote herself at events. Being one of the scriptwriters for some of her events, I was asked not to mention her name in the context of achievements. Year 2012, when she was celebrating Catwalk’s 20th anniversary, there was a picture wall dedicated to media coverage of her company. Before sending that wall to print, she dropped one quote from it that read ‘behind every successful man there is a woman, and behind every successful event there is Frieha Altaf’. Her argument was that it’s Catwalk’s anniversary, not hers.

Year 2009 at the Lux Style Awards again I saw Frieha multitasking to another level. She was talking to someone on her phone and was signing some cheques. I was asked to read out the names of sponsors while she was busy with her call and cheques. I was sure she did not hear most of the names, and as the list ended, so did her phone call. As soon as she ended her conversation, she immediately pointed out that I had missed R Team’s name. It goes to show how her brain is a reservoir of information and how fast it processes it. It’s clearly why she doesn’t forget things that easily. No matter how old an event has been, one can always find it in Frieha’s record room.

Frieha’s energy to go from work to party mode is admirable. For her, work and celebration go hand in hand. Her after parties are sometimes more fun than the event itself. She loves to party hard and until late at night; but you will still find her in the office on time the next day.

Her love for travelling is a no secret either. Snippets of her glamorous life are uploaded by her online, unapologetically, and those who love her, can’t get enough of her. Last month, her friends on Facebook got a free trip to Australia and it was one enviable excursion. Also, despite being the best in business, she never stops learning and exploring. Her recent attendance as the handpicked attendee at the Destination Wedding Planner’s Congress is a testament that she is very much on the radar of international organizers.

The Show Must Go On:

She often advises, "Think big - soch bari ho gi toh kaam baray hongay". She lives by this motto and never by her last achievement. Right now, her only competition is herself and she keeps on setting new records as she marches ahead like a storm.

Sadiq Saleem is a Dubai based entertainment journalist. He is also an Instep correspondent and can be contacted on his page fb/sidsaidso.