Crystal gazers and others

Predicting the future is a dicey business 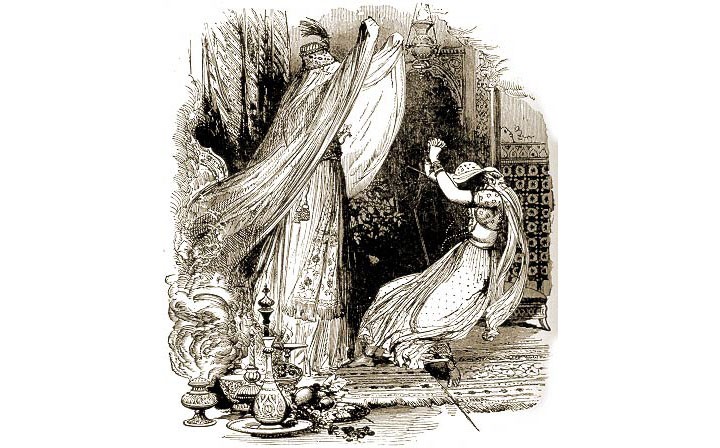 It happened a long time ago. Perhaps 1,200 years back. A man who claimed to be a divine leader became the first person to launch a satellite. In Nakhshab a moon rose from a well as soon as the sun went down, lit up the countryside for miles around, stayed in midair till the break of day and then slid back into the well. The show went on for nearly two months. Finally something went wrong with the contraption and it fell apart. But it had served its purpose.

The man who launched it became immensely popular and powerful. He was known as Al-Muqanna (the veiled one). He claimed that he veiled himself because his face was so radiant that no one could look him in the eyes. A prosaic explanation is that the man was a skilful chemist and during an experiment that went awry his face was disfigured. Anyway, he became so headstrong and had such a large following that the Abbasids in Baghdad had to send a huge army to quell his rebellion. He was finally routed but like Spartacus his dead body was never found.

No one now can be sure whether his moon was a device or an illusion. Whatever the truth, the affair is a tribute to human ingenuity or imagination. We at first imagine things which seem fantastic and unrealisable but sooner or later the fantasy becomes a reality. We have always dreamed of flying. Remember the old myth of Icarus. Finally in the 20th century we did manage to fly.

The above is a preamble to a fascinating episode found in "Suroshe-e-Sukhan", a dastan which Syed Muhammad Fakhruddin Husain Sukhan wrote in 1860. A dastan is a book of perilous and marvellous adventures, chock-a-block with romance, sorcery and battles. The usual stuff, so to say. But towards the end, the author comes up with a novel idea. We see the hero, a prince, order that a submersible vessel, made entirely of glass, be built. In fact, he calls for a submarine. Soon it is ready for a launch. Its interior is brilliantly lit up, fully carpeted and lavishly decorated. There are automatic fans which turn on when the prince lies down to have some rest. Its transparency means that as it dives and moves about in the depths of the ocean one could see all sorts of marine life at one’s leisure.

Sheer imagination or did Sukhan hear about submarines from somewhere? The idea of building submarines for warfare was in the air in the West for a while but not so common that someone in far-off India could have heard of it. Jules Verne wrote about Nemo and his submarine in Twenty Thousand Leagues under the Sea. But his novel first appeared in 1870. Nemo is an Indian prince who fought the British and, after losing the struggle, wanders about the world in a submarine. There is an off chance that Garcin de Tassy, the French scholar of Urdu, may have mentioned Sukhan’s dastan in one of his writings.

Those who say that they gather their information about the future by crystal gazing or from spiritual guides or aliens are even less trustworthy.

In 1864 Asghar Ali Akbarabadi in his Gulshan-e-Janfiza, another dastan, mentioned things which uncannily anticipate television and virtual reality. I quote the relevant text: "Gadgets that showed human figures conversing with each other and singing and playing musical instruments for your delectation but which could also make you feel, at times, as if you were, in fact, fondling them … the place was dotted with man-sized mirrors which showed not the onlooker’s reflection but the image of the person they desired to see."

Certainly it is imagination at work here. After all, Jamshed, the legendary king of Persia, had a curved mirror in his possession in which he could see whatever was happening in the world elsewhere. However, mind you, what were the exclusive privileges of legendary rulers are now household features. Ozymandiases of yesteryears, despair! Common men and women now luxuriate in items you only dreamt of.

Predicting the future is a dicey business. Even those who try to deal with the matter on a rational basis often slip up badly. Those who say that they gather their information about the future by crystal gazing or from spiritual guides or aliens are even less trustworthy. So many of their forecasts turn out to be rubbish but they are not embarrassed at all.

The world has changed more in the last 50 years or so than it did in the preceding half a dozen centuries. If a man who had died 70 or 80 years ago could be brought back to life, he would be stunned and unsettled. If Mirza Ghalib could be resurrected he also would be surprised but would almost certainly remark: "It must be the Farangis who have wrought all these changes". And he would be dead right. We have invented nothing for a very long time, not even a ballpoint.

As a keen reader of science fiction for nearly 65 years, I have no hesitation in saying that although the genre focuses primarily on depicting the technology of the future and a rapidly changing world its proponents failed to foresee many things. I don’t recall any mention of computers or cell phones. No one 10 years ago thought that something known as a 3D printer would usher in quite a revolution. Only Arthur C. Clarke, once the doyen of SF (science fiction), was perceptive enough when he said in 1946 or 1947 that satellites can be used for communication purposes. He guessed right but no one took him seriously.

But why take SF writers to task who only wanted their imagination to run riot. Even those holding responsible posts, who invariably took an objective view of matters, sometimes knew no better. Thomas Watson, President of IBM said in 1943: "I think there is a world market for maybe five computers". More recently, in 1977, Ken Olsen, President of Digital Equipment Corporation, remarked: "There is no need for any individual to have a computer in their home."

To be fair to these gentlemen it should be stated that the earlier models of computers were too big and unwieldy and costly. Who could have foreseen that they would, very soon, become quite small and cheap. So learn your lesson. Don’t predict.

Crystal gazers and others