Understanding the context and significance of Jinnah’s August 11, 1947 speech 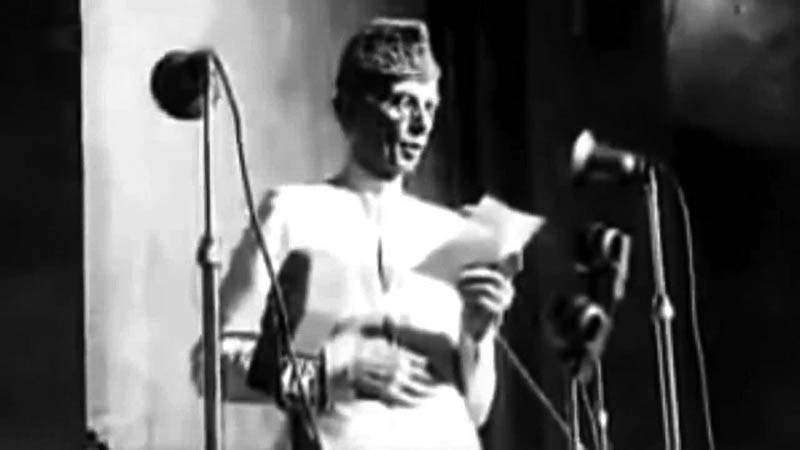 Jinnah’s August 11, 1947 speech has always confounded scholars and the rest. Often called Pakistan’s ‘Magna Carta’ some argue that it gives Jinnah’s blueprint for the country he was just about to achieve (Pakistan was born four days later) while others have labelled it as just some ‘remarks’ which were supposed to give the context for the future consolidation of Pakistan. Regardless, it was Jinnah’s first speech to the Constituent Assembly of Pakistan -- the future constitution making body of the country, and just that fact made it an important pronouncement. Therefore, one needs to clearly understand its context and significance.

Hector Bolitho, Jinnah’s first official biographer and who had access to all his papers, noted that "Jinnah spent long hours working on ‘the great speech of his life’ and would ‘leave these fault finding expeditions to return to his desk, where he worked, for many hours, on the presidential address he was to give to the Constituent Assembly of Pakistan, on August 11." This statement, however, sits uneasily with Jinnah’s own words on August 11 where he said that "I cannot make any well-considered pronouncement at this moment, but I shall say a few things as they occur to me." This means that perhaps he made some notes on the subject, but did not have a fully written speech. In any event, the most controversial part of the speech proved to be his thoughts on religion and the state where he exclaimed:

"I cannot emphasise it too much. We should begin to work in that spirit, and in course of time all these angularities of the majority and minority communities, the Hindu community and the Muslim community -- because even as regards Muslims you have Pathans, Punjabis, Shias, Sunnis and so on, and among the Hindus you have Brahmins, Vashnavas, Khatris, also Bengalees, Madrasis and so on -- will vanish. Indeed if you ask me, this has been the biggest hindrance in the way of India to attain the freedom and independence, and but for this we would have been free people long long ago. No power can hold another nation, and specially a nation of 400 million souls, in subjection; nobody could have conquered you, and even if it had happened, nobody could have continued its hold on you for any length of time, but for this. Therefore, we must learn a lesson from this. You are free; you are free to go to your temples, you are free to go to your mosques or to any other place or worship in this State of Pakistan. You may belong to any religion or caste or creed -- that has nothing to do with the business of the State…We are starting in the days where there is no discrimination, no distinction between one community and another, no discrimination between one caste or creed and another. We are starting with this fundamental principle: that we are all citizens, and equal citizens, of one State."

A number of people saw this statement to be a change of course for Jinnah. Even people in the government of Pakistan saw this as a dramatic change and it was said that a press advisory was contemplated with sections censored. Journalist Hamid Jalal wrote:

"This speech of the Quaid became the target of what may be called the first of the press advices issued by Pakistan’s permanent establishment…Several leading members of it tried to have some secularist passages of the speech blacked out in the press. They were duly obliged by those who could use their authority to do so. But unluckily for them this attempt of theirs came to the notice of Mr. Altaf Husain, editor of Dawn…He threatened them that he would go to the Quaid himself, if the press advice was not withdrawn. Mr. Altaf Husain won and the speech of the Quaid was published in the newspapers without the tampering that was planned."

Hamid Jalal heard this version from Zamir Siddiqi who was associated with Dawn and knew Altaf Husain well. Siddiqi again confirmed this version in a letter to Zamir Niazi. Zamir Niazi also noted another corroboration of the event from Mr. Z.A. Zuberi, who was the assistant editor of Dawn in 1947 who noted:

The first prime minister of Pakistan, Liaquat Ali Khan, while unfurling the flag of Pakistan clearly noted that: "This flag is not the flag of any one political party or community."

"A phone call came later in the evening the same day advising that the particular portion of the speech may not be published…The text of the speech was before Mr Altaf Husain…[and he] wanted to know who wanted this deletion. Were these instructions from the Quaid, or was it somebody else’s idea? The advice was reported to have been conveyed by Mr Majeed Malik, the then principal PRO [Public Relations Officer]…Malik sahib rang up Chaudhari Mohammad Ali, the then secretary-general of the cabinet division…After their conversation was over Malik sahib told me it was not an advice but ‘just a question of opinion.’ There was no question of censoring the Quaid’s speech…"

Whatever the veracity of the attempts to ‘censor’ the ‘secular’ parts of Jinnah’s speech, it is clear that there were certainly people who were unhappy with the sudden change of tone in Jinnah’s speech. Therefore, it was clear that as soon as Pakistan was created the patchwork coalition which Jinnah had cobbled for the 1946 election was already unravelling and his own party men had begun to question him.

Judging from Jinnah’s own speeches this was certainly a dramatic turnaround. Since Pakistan was solely achieved on the basis of the distinctiveness of the Muslim millat, and its inability to live together with the Hindu nation, it was clearly expected that with the establishment of Pakistan the Muslim millat and the citizenship of Pakistan would be synonymous. But here Jinnah had declared all people -- regardless of caste or creed to be an equal part of the new Pakistani millat -- citizenship -- thereby reframing the earlier obvious co-relation.

After all Jinnah had himself stated in 1940 about the Muslim and Hindu nations in India, that "To yoke together two such nations under a single state, one as a numerical minority and the other as a majority, must lead to growing discontent, and final destruction of any fabric that may be so built up for the government of such a state." So how could these ‘two’ nations, with the majority and minority community now switched, live as one nation in Pakistan? After all this incredible differences was the raison d’etre for the creation of Pakistan itself! This question must have puzzled those listening to him.

Furthermore, Jinnah had based his claim of a separate nationhood on the foundations of Islam as a ‘complete code’ of life, so how could this code which permeated every facet of life not have an impact on the state and its functions? How could this code now become a ‘personal sense’ and not the defining feature of the new state?

While there are many ways to interpret the speech, allow me to posit one explanation. Faisal Devji in his book, Muslim Zion: Pakistan as Political Idea, has argued that for the political idea of Pakistan geographical considerations were secondary. Devji argues that like Israel, Pakistan was conceived as a "profound distrust of nationalism, and an attempt to create new forms of political belonging." In this way of thinking, "religion stands distinct from the territory its followers covet, which had in any case been seen as an accidental homeland for them."

Jinnah’s lack of clarity about the geographic contours of Pakistan therefore validates this conception, as Devji notes: "…Mohammad Ali Jinnah’s demands at various times of bits of territory that included the Andaman and Nicobar islands as maritime links between East and West Pakistan, or for a corridor across the north of India as a territorial link between them, both justified largely for reasons of bureaucratic convenience. Indeed his main justification for the territory he sought, but was denied, was not the Muslim character of its population but that it alone would make for an administratively "viable" state…"

Analysed within this context, it is not far fetched to imagine that with the June 3rd, 1947 plan Jinnah was saddled with a Pakistan where nearly a quarter of its population were to be non-Muslim. Since the communal holocaust had yet to raise its ugly head and the mass migrations had yet to begin, Jinnah would have certainly expected a large majority of non-Muslims to stay behind in Pakistan, especially since he had repeatedly promised them fair treatment.

When the Dominion of Pakistan was established on August 15, 1947, 24.6 per cent of Western Pakistan and 30.1 per cent of East Bengal and Sylhet’s population was non-Muslim, according to the 1941 census. Hence keeping this demographic reality in mind, the first prime minister of Pakistan, Liaquat Ali Khan, while unfurling the flag of Pakistan clearly noted that:  "This flag is not the flag of any one political party or community.…As I visualise the State of Pakistan, it will be a State where there will be no special privileges, no special rights for any one particular community or any one particular interest. It will be a State where every citizen will have equal rights and equal opportunities."

Further when a member of the Assembly, Mr Bhim Sen Sachar, put forth a demand that a special committee be constituted for the finalisation of the flag of Pakistan, as under the present circumstances the minorities had not been consulted, Liaquat emphatically stated that 25 per cent of the flag had indeed been kept white to represent the significant non-Muslim population of Pakistan. Indeed when both Jinnah and Liaquat addressed the Constituent Assembly on August 11, a number of its members were non-Muslims. Out of a total of 58 members who were in the chamber on that day, sixteen were non-Muslims, forming about 27.5 per cent of the membership.

With this background, it becomes clear that the reality of independence and partition did in fact affect Jinnah’s conception of the Muslim state he was about to achieve. From a ‘Political idea’ Pakistan had become a reality and so had to imagine itself within the limits of a nation-state, where nearly a quarter of the population was poised to be non-Muslim. Being the expert pragmatist Jinnah has realised this necessity, and adjusted accordingly, but it seems that his followers did not grasp it either then or now.

This article is an adapted excerpt from the forthcoming Handbook for Contemporary Pakistan’s article on Jinnah by the author.