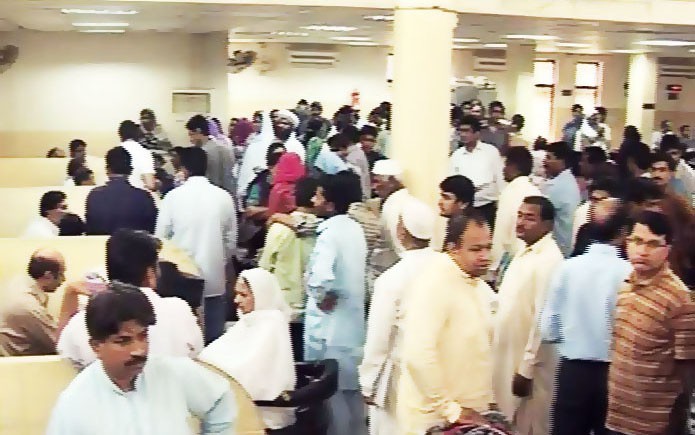 Walking through the steep alley towards one of Lahore’s two passport offices, it is hard to ignore the collapsing sewerage system. The murky, mossy, probably parasite-rich, stagnant water is not a welcoming sight.

Passport offices are certainly no picnic spots but during Lahori monsoon, the place is nothing less than an oven used for steam roasting, by cutting down oxygen supply that leaves one slightly dizzy.

Waiting in the queues is no mean feat, especially when sick-and-tired humans are moving at a snail’s pace. The little control one has begins to slowly slip through the sweaty palms -- the condition only increasing the discomfort.

It is not difficult to hear murmurs full of anger as people wait to be let into the office, even before the counter-to-counter run has started.

The lady standing right next to me in the line seems a little too fidgety. "It has been a long wait," she says. "I do not lose my cool often but it is difficult to stay calm when the heat is getting to your head and there appears no sign of this line ever moving."

Once inside, the scenario is not too different except that, finally, the lines are moving. The disturbing fact remains that there are no real security checks. Men at least get slightly frisked; women are allowed inside without even a second glance.

It would be unjust to say that the process of passport acquisition has not been upgraded. Getting a passport has become more mechanically efficient but miscommunication still causes uproars. In one case, I saw a lady who was drenched in sweat complaining, "It’s not easy to take rickshaw ride from one [passport] office to the other, all day. It is frustrating!"

This might seem to be a rant but it is a matter of sheer concern. Lack of facilities could be overlooked but what needs to be on top of the government’s agenda is to ensure that there are no managerial loopholes.

Moving along the numbered counters, one is informed that the documents he or she presented have been "checked." By the time you reach the last counter you are eloquently explained that you do not have one piece of document or the other without which the process that has taken a couple of hours to complete is futile.

My question is, whose fault is it really that your entire day is wasted? Undisputedly, the fault is that of the person who forgot to bring the documents and never those who hailed the green signal for him/her earlier.

Another common sight is the innumerable ‘agents’ out to help those pouring in through the gates. Except that the help comes at a price; and the price varies with inflation rates.

Nonetheless, it is a guarantee that the needy would not have to wait outside the passport and immigration office in endless queues to get their tokens.

Unfortunately, that is the only hurdle the agents can aid you in crossing. Once the actual process begins, ‘sifarish’ rarely works.

The assistant director of Passports and Immigration seemed aware of the issue all too well. Interestingly, he did take notice of the problem once it became evident that the wheeling process had enraged the applicants who were coming through the proper channel.

Some changes ought to be made so that the frustration ratio of the common applicant drops.