Without a game plan

What policy is the government adopting to rebuild the ruined sporting structure and build national spirit, national hope and a sense of unity? 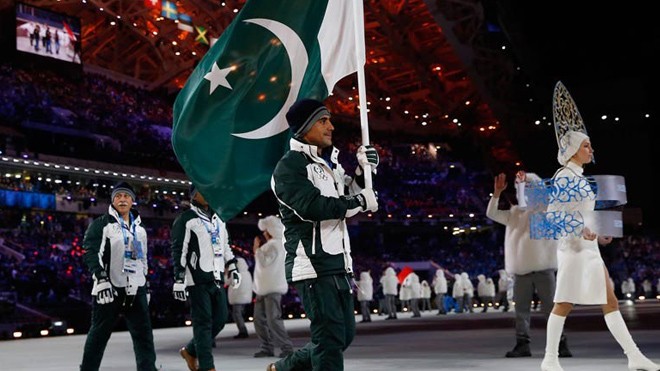 The Pakistan contingent that marched into the Olympic Stadium at Rio is in many ways an unusual one. It consisted of only seven athletes, the smallest number from a nation as large as Pakistan with a population of some 190 million people. The others walking behind the flag were amongst the 17 officials accompanying the participants. This figure alone indicates the imbalance which has left Pakistan’s sports teetering.

With the national field hockey team, which had been a part of every Olympic Games since 1948 this time ignominiously failing to qualify, Pakistan’s entrants all get in on regional quotas or the International Olympic Committees wild card system, intended to allow participation by nations who do not meet qualifying standards.

On the basis of population, Pakistan is by far the largest country in this category. In addition, its seven athletes, comprising two shooters, two runners, two swimmers and a judoka are not expected to leave any discernible mark on Olympic turf, though there are experts who believe judo player Shah Hussain could move beyond the initial rounds and perhaps even spring a surprise as did his father, Hussain Shah, by winning a boxing bronze at the 1988 Seoul Games.

That medal was only one of two obtained by Pakistan in nearly 70 years, apart from the eight medals won in field hockey. The sports that once brought Pakistan pride has now been effectively demolished in the country. Those involved in the management of the game say there are barely 50 players who contest for a place in the highest level of the game.

The grassroots have vanished; the nurseries have been destroyed. In this situation, it is questionable whether the Rs60 million to be spent by the Pakistan Sports Board under allegations made in the 2016-2017 federal budget for sports on laying Astroturf at a hockey ground in Swat would make any real difference. Astroturf is also to be laid in Gilgit.

Read also: Far from the mark

The real aim must be to revive sports at school levels, build foundations there, and then move on to a structure of club and district level sports which barely exists in the country. In the absence of this, it is unlikely that elaborate facilities, such as the Narowal Sports Complex being built in Federal Minister Ahsan Iqbal’s constituency, on which Rs60 million is being spent, will really serve any particular purpose.

Like the elaborate road structure that now ensnares Lahore, it would make an impression but perhaps not bring any real benefit in terms of giving ordinary people, and particularly children and youth from deprived backgrounds, access to sports. This is something we need to think about.

It is easy to blame the Pakistan Olympic Association or the Pakistan Sports Board, which raises money to fund sporting activity, for not doing enough to streamline sports or the often corrupt, inept associations which manage them. However, the rot goes much deeper than this.

It is then hardly a surprise that we are not producing athletes of international standard. The key lies not in pointing figures at the POA or other bodies but in asking what policies the government is adopting to rebuild ruined sporting structure.

In the first place, spending on sports is dismal. The Pakistan Sports Board has been allocated Rs1,000 million by the federal government in the budget but this, of course, will go essentially towards renovating the dilapidated facilities which stand around the country and sending contingents overseas. When these contingents comprise of more officials than athletes, we wonder who checks how the limited funds available are being used.

There has been further confusion, and a lack of uniform policy, in funding for sports since the 18th Amendment of 2010, which devolved most powers to the provinces. While the Punjab allocates just Rs5 billion to sports, it produces most of the athletes who win at the national level. Sindh has for 2016-2017 pushed up its allocation to Rs830 million and the impact of this will need to be watched.

From the federal government, Rs50 million go towards organising the National Games in Quetta this year, and the contests there should give us a good idea of where we stand on the ladder of sporting success.

The truth is we do not stand very high. In athletics, in swimming, in boxing, in football and in other sports which bring in the largest number of medals at the Olympic or international level, we simply do not figure at all. Even at the Asian level, Pakistani athletes cannot hold out against India and certainly not against the regional power of China, Japan or countries like Malaysia which specialise in specific sports such as badminton. Our own excellence in squash or wrestling is now of course something that belongs to the past.

The reasons for this are partially linked to mismanagement of associations and other bodies at the highest levels. But the real priority has to be on generating an interest in sports and money for them at the lower levels. The grounds which stand empty and in a dismal state of disrepair at government schools around the country need to once again see children run, jump and play team games on them.

In some cases, this is now impossible because classroom buildings have been haphazardly constructed to cover these areas. The same is true of communal grounds in our urban centres and other places. There is simply no structure for sports. Few countries have a situation where institutions, such as the army control major sporting federations, have the largest number of athletes, the most facilities and use these primarily for their own players rather than for the general public.

It is then hardly a surprise that we are not producing athletes of international standard. The key lies not in pointing figures at the POA or other bodies but in asking what policies the government is adopting to rebuild ruined sporting structure and to understand that success in sports can pull young people off streets and also build national spirit, national hope and provide a sense of unity which is especially visible on occasions, such as the Olympic Games as flags from over 200 participants flutter above the stadium at Rio.

Without a game plan