The revolution will not be downloaded 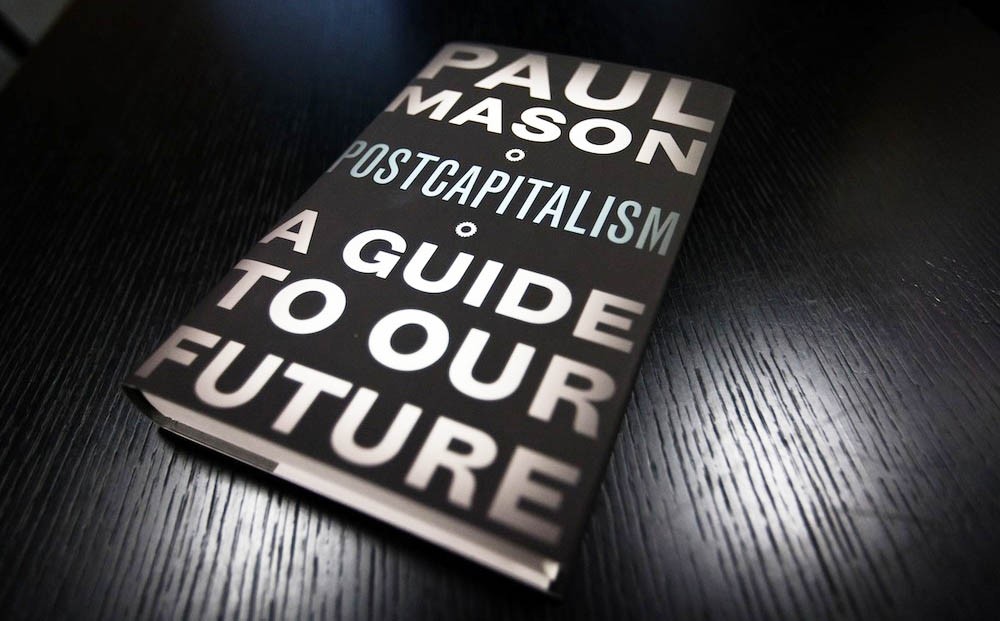 Paul Mason’s latest book Postcapitalism: A Guide to Our Future has generated considerable interest among leftist circles. A passionate debate about the book, for instance, was conducted on the pages of International Socialism Journal. Naomi Klein’s endorsing blurb on the back cover, perhaps, contributed further to  the status of the book.

There is no doubt that the book has certain merits: It offers a scathing critique of the neo-liberal project. The neoliberal ‘false dawn’ is not merely dismissed empirically, in fact he ridicules market fundamentalism by narrating everyday experiences. For instance, he writes about how contracts issued at Apple’s Foxconn plants in China, in 2010, forced workers to sign a pledge to not commit suicide due to workplace stress.

Likewise, Mason has helped reintroduce certain Marxist debates on economy. The attempt to explain the capitalist crisis by way of Kondratieff waves is important. Besides offering a wealth of information, his journalistic writing style renders the text accessible to general readers. His book includes a lot of analysis apart from his own convincing perspectives.

Many on the left will agree with Mason when he claims that the contemporary capitalist crisis will either lead to a return to the 1930s, or if the present system survives, albeit in a weakened state, the working classes will bear the brunt. There is, he claims, an optimistic possibility as well: this crisis can lead to postcapitalism. It is this question of postcapitalist transformation where one finds the book problematic.

In his view, there is a mismatch -- impossible to sustain in the longer run -- between neoliberalim and information-based economy. This mismatch issues from miraculous advances in technology. Technological advancement has rendered the Marxist conception of ‘class’ irrelevant. The clichéd proletariat is, in fact, dead. "In the past twenty years, capitalism has mustered a new social force that will be its gravedigger … It is the networked individuals who have camped in the city squares," (pg 212). This networked individual is "adept at drawing down knowledge from a relatively open and global system," and behaves in a networked way "from work to consumption to relationships and culture".  As long as one has "basic education and a smartphone", any "barista, or admin worker, or legal temp can become, if they want to, a universal educated man". Even factory workers in China, during their non-work time have become "avidly networked" (pg 115).

In his view, there is a mismatch -- impossible to sustain in the longer run -- between neoliberalim and information-based economy. This mismatch issues from miraculous advances in technology.

The main contradiction is not between classes (or the core and periphery, a debate he does not really broach). It is between networks and hierarchies. Networks represent the "possibility of free, abundant socially produced goods" while hierarchies constitute a system of "monopolies, banks and governments struggling to maintain control over power and information" (p, 144).

Wikipedia is one such embodiment of networked, abundantly and socially produced goods. "Wikipedia has 208 employees. The thousands who edit it do so for free … With 8.5 billion page views per month the Wikipedia site is the sixth most popular in the world … By one estimate, if it were run as a commercial site, Wikipedia’s revenue could be $2.8 billion a year" (p, 128). Mason points out that in the case of Wikipedia, "network makes it possible to organize production in a decentralized and collaborative way, utilizing neither the market nor management hierarchy" (p, 129).

The only problem Mason is unable to fix in his book is the question of climate. When Wikipedias under postcapitalism will socially and abundantly go on producing consumer goods, the postcapitalist society will have to adjust production and consumption with the climate.

Borrowing, in an eclectic manner, from Marx, Antonio Negri, Manuel Castells (though Castells is not acknowledged) and Peter Drucker, the postcapitalism society conceived by Mason suffers from two major and interlocking flaws.

Firstly, it is fanatically ‘Eurocentric’.  When he claims that capitalism is "global, fragmentary, geared to small-scale choices, temporary work and multiple skill-sets" and consumption "has become a form of self-expression" (pg xvi) and boundaries between work and leisure have been blurred (pg 209), he is definitely not talking about garment workers at Bangladesh’s Rana Plaza. When this trap house of a factory collapsed, 1,133 workers died on April 24, 2013. The tragedy reminded many of New York City’s Triangle Shirtwaist Factory Fire in 1911. Earning 1.36 Euros, working 10 to 12 hours a day, four million Bangladeshi garment workers live on starvation wages, unable to fend off hunger let alone think of "consumption as self-expression". The workers are sometimes even denied the right to go to the toilet. Here the blurring of boundaries is not between leisure and work. Here the workers find blurring of boundaries between work and slavery. Another global commodity, the Apple iPhone, is produced in a similar fashion.

Likewise, Mason’s "networked individual", the bearer of postcapitalism, is in a majority in London, Tokyo and Sydney. True, as mentioned above, the Chinese have been taken into account. During their non-work time, they get networked. What about India? He does not mention that hardly 20 per cent of Indians have access to Internet. This brings us to the second major flaw in Mason’s book: It simply refuses to take into account the global digital divide. Roughly two-thirds in Asia and Africa happen to be on the wrong side of digital divide. In fact, before downloading postcapitalism, digitally deprived Afro-Asians will have to download basic literacy.

It is, therefore, understandable that Nepal witnessed a refreshingly old-fashioned revolution led by Maoists instead of dot-communists. A partially successful democratic transformation in Tunisia would not have been possible without its strong trade union base. Even if one buys the widely circulated mainstream myth, flaunted by Mason as well, that the Arab Spring was a networked, Facebook revolution, the developments in Syria and Egypt further expose Mason’s thesis that blindly ignores the role of state.

It seems that the state will play a neutral spectator as dot-communists will volunteer, Wikipedia-style, to socially download food, clothing, electricity and education for the global South. Even if one concedes that Wikipedia-style volunteer work is uniquely new in human history, what if networked individuals and dot-communists refuse to download the revolution?

Mason himself points out that this e-bourgeoisie is hardly interested in politics. His hope lies in the fact that networked individual is indeed angry. So was apocryphal proletariat. Mason ridicules the left for not understanding that the proletariat has not really risen to deliver the end of capitalism. Instead, the proletariat devised strategies to survive and go on living despite capitalism. What if angry networked individual also go on living with survival instincts?

Ironically, this highly glorified harbinger of postcapitalist revolution is a post-ideological subject. Nowhere does Mason describe the philosophical outlook of his revolutionary subject. Herein lies yet another problem with Mason’s thesis; he identifies the technological possibilities of building a postcapitalist society; he identifies the subjectivities; and he selectively deploys Marx to build his claims. But he dismisses Lenin and simply ignores Gramsci.

His post-ideology dot-communists will simply outdo capitalists through their voluntary services, a bourgeois state not withstanding.

The revolution will not be downloaded