We can bounce back 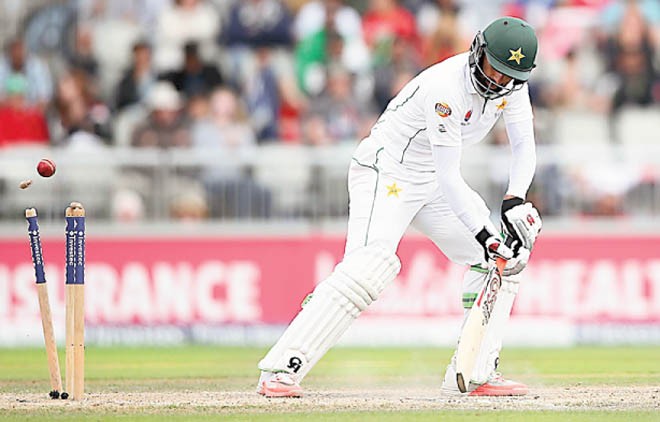 The big defeat in the Old Trafford Test came as a shock to all of us as no one expected the team to take a nosedive like that after the brilliant victory at Lord’s in the first Test match.

Although Pakistan has always been an unpredictable team and it is hard to tell when they will excel or flop, the manner in which Misbah-ul-Haq’s men performed in all three departments of the game at Old Trafford is indeed a matter of great concern.

In both the Tests, the toss played a big part. While Lord’s win saw concerted efforts from the entire team with outstanding performances from skipper Misbah, Asad Shafiq and Yasir Shah, at Old Trafford it was England who played as a cohesive unit with skipper Alastair Cook and Joe Root displaying superb form with brilliant hundreds.

The pitch at Old Trafford was not a difficult one as England showed by compiling a massive 589-8 declared in the first innings. So why were Pakistan, despite riding a crest after Lord’s, dismissed for just 198? It was a sort of wicket where a little application and concentration would have fetched 400 and more for Pakistan, considering their strong middle-order.

If we had got a decent start from Mohammad Hafeez and Shan Masood, things would have been different. James Anderson’s return did make a difference for the hosts as he yet again accounted for Shan’s wicket early on to dent Pakistan’s hopes. Both Shan and Hafeez were caught in the slips a few times which showed they are suspect on off-side deliveries. Coach Mickey Arthur should ask the two openers to be watchful of their off stump and tackle the off side deliveries in an adept manner.

Despite the big defeat in second Test, I feel that not too many changes should be made in the side. The team picked for the England Test series is the best available and we have some fine middle-order batsmen in Azhar, Asad, Younis, Misbah and Sarfraz who can take on any bowling attack in the world when on song.

However, Pakistan need to learn quickly from their mistakes like England did after Lord’s. Both were low-bounce wickets which normally suit Pakistan, but after Lord’s England surely did their homework. And they applied themselves better.

One look at the runs scored and wickets lost can give you a clear picture on how well England performed. They scored a monumental 762 runs in the two innings at Old Trafford for the loss of only nine wickets while Pakistan lost all their 20 wickets for just 432.

A team can do nothing about toss but the rest is about application and strategic planning. Pakistan will have to minutely review their performance in the second Test and will have to plan and regroup in order to bounce back at Edgbaston where the third Test is to be played.

I am no cricket coach but from my experience and observation, I can say that Yasir needs to give more flight and loop to his deliveries in order to draw England batsmen out of their crease and use their feet. Almost all his deliveries traveled at a low trajectory which made it easier for the opposition to hit him.

I am also not sure if bowling round the wicket and pitching the ball repeatedly outside the leg stump is a great strategy for Yasir since the England players comfortably kept padding at him.

I recall how Inzamam-ul-Haq brilliantly utilised Danish Kaneria by taking a slip and a gully and Kaneria nabbed quite a few players by forcing them to come out and drive. Pitching the ball up is the key on low pitches, not bowling short.

England obviously worked hard after Lord’s to tackle Yasir. I recall a significant instance when I played in the Scottish League back in the 1970s. Australia’s Bob Massie was playing in the league in those days and I remember well how he had dismissed all ten players of Poloc Club in an innings with his unbelievable swing bowling while representing the Killmarnock club.

Pakistan’s opener Sadiq was among Massie’s ten victims then and told me that he had never seen anyone swing the ball as much as Massie did. His views were endorsed by Test opener Khalid Ibadullah who was playing for English county Warwickshire at the time.

When Massie made his debut for Australia, he bagged a world record 16 wickets in his first Test and England lost the Test. From that point on, the England players watched Massie’s bowling for hours on video cassettes and figured him out after a few matches to thrash him all over the park.

That was the end of Massie and his short career. Our spin wizard Saqlain Mushtaq, who is briefly assisting the England players, may have shown Yasir’s videos to them.

We must remember that Pakistan camp also has two spin wizards in Intikhab Alam and Mushtaq Ahmed who can teach Yasir a lot in countering the opposition. Both of them have vast experience of bowling in the English conditions.

The couple of changes that I see at Birmingham could be the induction of opener Sami Aslam and perhaps a right-arm pacer to give variety to the pace attack.

Young Baber Azam is in fine form for Pakistan ‘A’ and chief selector Inzamam can consider his induction.

All said and done, I would like to request the media and the fans not to bring down the team after just one defeat and hope for the best in the coming Tests.

There is no doubt about the talent of our players. It is only a matter of regrouping and applying themselves better. Cricket is a game of glorious uncertainties and I have full faith that Pakistan will put the old Trafford defeat behind them to bounce back handsomely at Birmingham.

We can bounce back