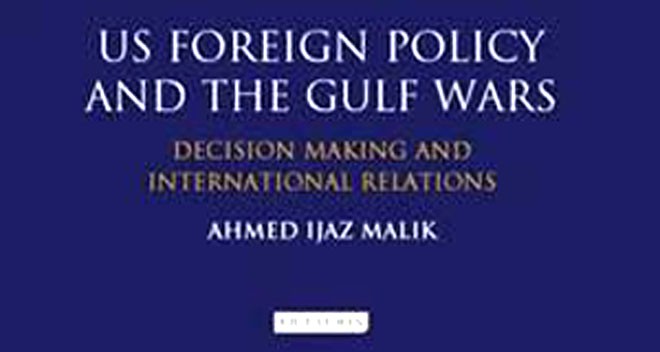 It is indeed encouraging that a Pakistani scholar, Ahmed Ijaz Malik, has authored a well-researched tome, US Foreign Policy and the Gulf Wars: Decision-making and International Relations (I.B. Tauris, 2015), on the Middle East. The book is not atypical merely because of its authorship, its exclusivity largely owes to its subject matter.

Informed by a critical-realist approach ‘encompassing the Machiavellian and Marxist tradition’, Malik has offered a courageous discourse analysis of the academic and intellectual discourses surrounding the decision-making to wage both the US wars (1991, 2003) against Iraq. Likewise, he deconstructs the US policy documents and official statements to unmask the actual motives behind the two US invasions of Iraq. This is done not merely by pointing out the inconsistencies in the official discourses, on the one hand, and highlighting the contradictions between the official justifications of the war and the actual conduct of the war, on the other.

Unlike other disciplines, the discourse analysis in the field of international relations is also a forte of the so-called constructivist school. The constructivists and their academic cousins gaining wider currency since the 1980s, assign a primacy to ‘identity’ and discourses in analysing international politics.

Understandably, the book opens with an argument with the constructivists. While Malik does not dismiss the importance of discourse in the conduct of foreign policy, he however views the discourse as an instrument. The primacy in the international relations, he argues and subsequently skillfully establishes through the case of Iraq wars, belongs to economic and political interests. Hence, his book is not merely a powerful indictment of pro-war academics and US policy on Iraq, it also throws the gauntlet to the constructivists.

Curiously, the academic discourses he has selected to analyse are grounded in such approaches as realism, liberalism, neo-conservatism and cosmopolitanism. Constructivists beyond the introductory chapter do not find any mention. This itself is a cruel comment on constructivists.

While a repertoire of academic courses has been analysed, from cosmopolitan David Held and Anthony McGrew to liberal-leftish Michael Walzer as well as neoconservatives like Irving Kristol, a few stand out for their sheer fanatical advocacy of second Iraq war. Jean Bethke Elshtain was one such promoter of second Iraq war. Advocating US invasion of Iraq, she dismissed any notion of blowback by claiming, ‘violence does not always beget violence’. The ‘enemy’ delineated in her writings, as in the case of some other academics examined in this book, is irrational, apocalyptic and above all ‘evil’.

Evil is one of the four things, according to Terry Eagleton, that exist for the hell of it. The delineation of Saddam as ‘evil’ helped build the case for a ‘just war’ and humanitarian intervention. The ‘just war’ theme united all the pro-war academics despite the differences in their theoretical frameworks. Ominously, the discourse shaped by academics and intellectuals is echoed by the officialdom. Bush Jr "used the term ‘evil’ in 319 separate speeches delivered from the time he took office up to 16 June 2003’ (p, 202).

The portrayal of Saddam Hussain as an ‘evil’ and, consequently, the attempt to justify a rethinking of ‘international law and the role of the UN’, ‘the need for humanitarian intervention’ and ‘the promotion of democracy and capitalism’, had significant consequences from the viewpoint of international politics. These themes, Malik contends, "all contributed to the development of the political discourse of ‘prime modernity’ -- the way of life that is applicable to civilised societies.

This enabled the G.W. Bush administration to project their motives on the scales of individual and ‘humankind’ rather than inter-state power politics". Thus, on the one hand, this ‘discourse favoured the strategy of invasion over other options’ (p, 204), on the other, the 2003 war was a departure from a traditional conduct of war whereby states are framed as the ‘enemy’.

Contesting the academic (and official) depiction of the post-9/11 ‘enemy’ as the ‘evil’, Malik points out not merely the US support for Ba’athist Iraq and Muslim fundamentalists during the Cold War but also argues that many post-Cold War conflicts were engendered, in part, by Washington.

Likewise, when Walzer argues for the humanitarian intervention in Iraq on the grounds that the people of Iraq were too disempowered to remove Saddam Hussain, Malik contests his claim by pointing out the US apathy towards the Kurdish people, criminally gassed by Ba’athist regime, in the wake of 1991 war.

This comparison offers interesting continuities and slight discontinuities, especially in the case of NSS 2002 and Iraq war 2003. For instance, from a discursive viewpoint, it is interesting to note that the depiction of the former USSR in NSC 68 and delineation of post-9/11 ‘villains’ is strikingly similar. While the UNO was seen as an antagonist in the Cold War, an attempt was made to embrace the UNO in 1990. In 2003, the UNO again became a villain. Small deviations not withstanding, a common theme since the World War II is the US commitment to promote capitalism globally. Another curious continuity is the permanence of certain individuals or their intellectual influences. Take, for instance, the case of Paul Wolfowitz. He, as a student, worked with Paul Nitze and worked with daddy Bush as well as Bush Jr.

Malik has also mounted sufficient evidence to foreground the importance of Israeli security for Washington while devising strategies in the Middle East. Likewise, the centrality of oil is compendiously highlighted. In short, for the scholars and students of international relations or the politics of the Middle East, this work offers profound insights.