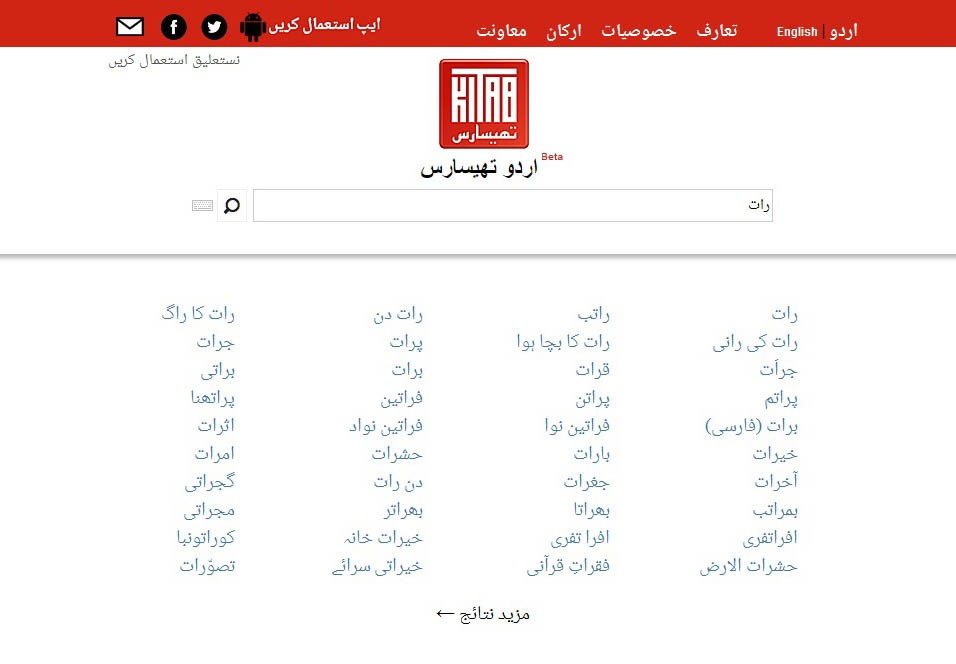 The publishing house Kitab has launched the first online Urdu Thesaurus website and android app. This is an occasion for Urdu language speakers to celebrate. Despite a highly evolved poetic idiom, and a structure that is able to convey very complex ideas, Urdu has suffered from a serious lack of reliable online and electronic language resources.

This Urdu Thesaurus and android app has been in the works for a while -- it reflects 10 years of ongoing work by Musharraf Ali Farooqi, acclaimed author and translator. Farooqi gathered this data from dictionaries and reference sources; he then proofread and had the data typed and compiled into spreadsheets.

Dr Awais Athar, a computer scientist currently based in Cambridge, UK, joined the project in October 2015 to create the computer database and the android app. Farooqi and Athar collaborated on the project and exchanged ideas via emails and WhatsApp. According to Farooqi, half of the Urdu Thesaurus web and mobile interface was conceptualised over WhatsApp.

For Athar, whose research in computer studies mainly deals with natural language processing, the data organisation and research necessary for the Urdu Thesaurus proved to be a good opportunity for flexing brain muscles.

"The availability of databases like the Urdu Thesaurus fuels research. Despite Urdu being one of the most understood languages around the world, it does not have many digital resources available," says Athar. He also commented on the arduous task of gathering, cleaning, curating and finally releasing the data in digital format. Athar’s efforts in digitally organising the data have made it accessible to the public. The thesaurus was designed keeping in mind two guiding principles -- a simple interface and an efficient search function.

One of the attractive features of the Urdu Thesaurus is that apart from showing synonyms for a word, it showcases other effective and user-friendly features: Upon typing a word in search, the thesaurus compiles a list of all compound words that may start, contain, or end with the word you typed out. For example when I typed, kalam (کلام), I could access a list of 50 words containing the word kalam. After clicking on my chosen word, I was given a choice of six synonyms, and furthermore, a list of words which either sounded similar, or, are spelled in a similar manner. Usually such additional words are called suggested words in a thesaurus. This kind of thorough work leaves little to chance, and I believe that for any user of this app, finding the synonym to any word will not be difficult.

Musharraf Ali Farooqi and Dr Awais Athar collaborated on the project and exchanged ideas via emails and WhatsApp. According to Farooqi, half of the Urdu Thesaurus web and mobile interface was conceptualised over WhatsApp.

For people familiar with Urdu font wars, a major question was how the developers chose their font. Historically, many scripts, including various types of Arabic scripts and the Devnagari script, have made much effort to sever the bond between the Nastaliq font and Urdu, but none have succeeded. Athar strongly felt that people find the Nastaliq font visually familiar compared to other fonts, but at the moment all digitally available Nastaliq fonts were either too large or presented problems with Urdu script ligatures when writing different words. Hence, the developers decided to stick to the NOTO Naskh font for Urdu. The beauty of this font is that it is available across all devices. When using this font, a device will not display that familiar error which looks like several little boxes in a row, and indicates that the device doesn’t have the software needed for that certain font. NOTO Naskh does not replicate the thickness of Nastaliq nor its more curved letters, however, it is still pleasing to the eye and easy to read.

Another interesting feature is that since the Urdu Thesaurus website has a phonetic keyboard and comes complete with an online guide, one can type Urdu using the standard English keyboard; For instance, the letter گ is typed with the g key, and the letter غ with SHIFT+g.

The app can be used by students, teachers, as well as general users of the Urdu language. A noted translator himself, Farooqi thinks that it will especially benefit young learners, educationists, and Urdu translators. Indeed, one hopes the future translators find the app useful for it is translations that keep adding to a language’s word-bank.

As someone with an abiding interest in the works of Quratulain Haider, Mushtaq Ahmed Yousufi, and Shamsur Rahman Faruqi, I feel that it just became easier to access these writer’s works. The fact that such a wealth of words is now available on the internet, and as a free android app, is enough to gladden the heart of any Urdu enthusiast.

A point to note is the presence of a lot of Urdu words with Persian roots in the Urdu Thesaurus. Persian words enrich Urdu and it is with a happy heart that one sees them as part of the Urdu Thesaurus -- no misguided effort has been made to purify the language of its Persian and Indo-Islamic roots.

At the end of the day, this website and the app is a result of a very committed effort on the part of the two gentlemen, Awais Athar and Musharraf Ali Farooqi. Had it not been for their tenacity and voluntary commitment to this labour of love, a standard and reliable resource like the Urdu Thesaurus would not have seen the light of day.