Kashmir: A new wave of resistance

Buoyed by the massive outpouring of support for Burhan, there are reports of militant sightings coming from different villages, far and near 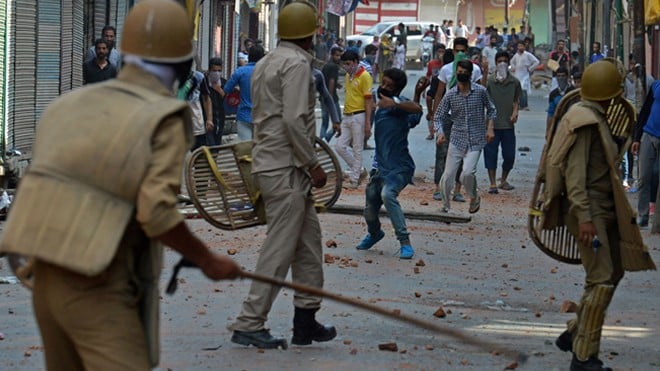 As soon as we finish our maghreb prayers and a chanting of ayat-al kursi with a brief dhikr in a typical Kashmiri fashion, a man in his early twenties rises and walks towards the pulpit in carefully measured steps to avoid trampling any of the believers sitting in neatly arranged rows.

Without any hesitation, he pulls the microphone, adjusts it to his height and screams: hum kya chahtay? (What do we want?) Everyone yells back with full force: azaadi (freedom). This is repeated several times till it achieves a mesmerising rhythm and sculpts into a huge and multi-decibel wail that I start to feel a gentle flutter on the large glass windows.

Many other slogans -- long and short -- calling for India to leave Kashmir, follow. This continues for about ten minutes. Then someone pulls out a music player, adjusts it close to the microphone and starts to play the songs of resistance. The first one is a captivating chorus sung like a nasheed: sabeeluna sabeeluna aljehad-o-aljehad. (Our way, our way: jehad, jehad)

While the older members in the congregation look around with fright in their empty eyes, the younger ones start to shake their heads in a certain unison obtaining into a trance. This revolutionary broadcast will continue uninterrupted for about an hour, till the muezzin’s call for Isha’ prayers.

This is today’s Kashmir. Only two weeks back, such scenes of open defiance would have been unimaginable. Day after day, people gather to fight long and pitched battles, often bloody, with the Indian forces. In the evening, soon after the maghreb prayers, mosques throughout Kashmir summon the faithful to protest the unabating mass murders.

Hilal Mir, editor at the Kashmir Reader, one of the leading English dailies, sums up the mood: "Kashmir is once again telling India to leave. The sentiment with which people are telling India to end its occupation of Kashmir has grown in strength after each successive uprising since 2008. It is the strongest now."

Read also: "The status quo over Kashmir is suffocating"

Peerzada Khurshid, a lawyer and convener of the Citizen’s Council Bijbehara, in the hometown of the current Chief Minister, Mehbooba Mufti, alludes to Mir’s assessment: "The current mood is in favour of azaadi as there are unprecedented levels of anger against India." He sees the character of the current uprising as quite different from those in the past, as people seem to be more determined to fight for their rights. "More and more people from rural areas are actively participating in the current uprising. The people in the villages are fighting with the paramilitary forces on almost daily basis. Also, the effect of the ongoing shutter down strike in the villages is total, which is a new phenomenon and an absolute surprise."

This is today’s Kashmir. Only two weeks back, such scenes of open defiance would have been unimaginable. Day after day, people gather to fight long and pitched battles, often bloody, with the Indian forces.

There is no let up in public anger as the youth continue to brave bullets and officially designated ‘non-lethal’ pellet guns that fire hundreds of tiny steel projectiles blinding people en masse and causing massive damage to their bodies, often fatally. So far, nearly 50 people, mainly the youth, have been killed and over 3,000 injured, many with incapacitating injuries. More than 50 youth are in critical condition on ventilators across different hospitals. Many of them are not expected to survive.

In addition, more than 100 youth and children have lost their vision permanently as the Indian paramilitary forces fire pellet guns directly aiming at their faces to cause maximum damage. Hilal Mir notes the response of the Indian forces has become more brutal with every uprising. "People everywhere tell us this time [the Indian] troops were out to kill. Many said [the inspiration] comes from the Modi regime’s murderous hatred for Muslims."

Despite being subjected to the most brutal vertical acts of oppression, the people remain far from subdued. "The public reaction, so far, has been very strong. We heard the youth storming camps of the security forces, snatching their guns and resolutely braving their brutality," observes Isaar Kashmiri, a government school teacher and an acknowledged writer and columnist.

As I come out of the mosque, there is a carnival of sounds. The songs of azaadi are dispersing loudly from every mosque near and far, adding a strange but festive sense of mystery to the air. In a mosque nearby, a song beckons for martyrdom: Aey mard-e-mujahid jag zara, ab waqt-e-shahadat hey aaya.

Suddenly, I notice a flurry of activity around me. Small groups of teenagers are coming together with a few of them carrying Pakistani flags. As they huddle, someone suddenly jumps, raising his right arm with a clinched fist and shouts: Pakistan say rishta kya? The crowd roars back: La ila ha ilal lah as it starts to walk towards the main road. The crowd is joined by more youth, the slogans reach a frenzied pitch as the Pakistani flags are swayed with consistent verve. Bharat teri mout aayi, Lashkar aayi Lashkar aayi; Mout ho Burhan si, sa’hib-e-Iman si; Hum kya chahtay azaadi, hum cheen kay lein gay azaadi.

The supporters of the People’s Democratic Party (PDP) that rule in alliance with the right-wing Hindu BJP, are increasingly becoming the targets of anger as exhibited by the slogans like PDP ka jo yaar hey, gaddar hey gaddar hey and PDP teri mout aayi, Lashkar aayi Lashkar aayi.

Interestingly, the slogan that befits the temper is in English, perhaps an indication about the profile of future generation of resistance fighters -- educated, confident and determined. "There is only one solution: gun solution, gun solution" rents the air, drowning out all the ambient sounds. As more and more youth join in, the modest crowd swells up to a thousand or perhaps even more, and the "gun solution" slogan becomes more frequent and salient.

With the death of Burhan Wani, a Hizbul Mujahideen commander, jehad has suddenly become a dominant narrative. For the first time since 2005, after more than a decade of relative stillness, there is a growing discourse that posits gun as the only means of resistance to the growing Indian state barbarity in response to Kashmiris’ political demands for a change in the brutal status quo, equal rights and azaadi -- freedom from the oppressive Indian yoke.

The situation reminds me of the early 1990s, when everyone in my generation -- now in our forties -- wanted to get hold of a gun to fight the oppressive Indian might, of course without any clue to its attendant challenges. Back then, we were in no mood to heed any counsel for moderation. Today, as the new generation of youth march on the streets, there is no appetite for a dialogue with India, as they feel constantly betrayed by the Indian overlords like the Muftis, the Abdullahs and a plethora of artificially created groups that claim to represent their pro-freedom aspirations.

This sudden public support for militancy as a path of choice to resist India is not surprising to Aadil Rashid, Executive Director at Khidmat Ventures, a company specialising in customised service delivery solutions to businesses. "It is important to note that the massive outpour of grief and support was for the death of a militant commander. In a way, the people have showed approval for the choices Burhan made. The new generation is defiant as it has lost patience in an atmosphere that is extremely oppressive and suffocating. Therefore, I fear that militancy will rise."

But Advocate Khurshid believes such a sentiment is predominantly manufactured by the Indian television channels. "I don’t think there is necessarily an appetite for militancy as an option of choice. The most important thing is that the people want to achieve their goals."

Nazir Ahmed Latoo, 56, father of 22 year old son, Aamir Nazir, a post-graduate student of commerce at the Aligarh Muslim University, who was killed last week by the paramilitary forces, stresses for a peaceful resolution of the crisis. "We are not a violent people. We want peace. But the world must help us to resolve this issue, once and for all, to avoid further tragedies."

Isaar Kashmiri is worried at what the future holds. He admits that Burhan -- both in his life and death -- has inspired a new generation of Kashmiris bringing the gun as the choice of resistance, to the fore, once again. "But I don’t consider it a wise choice. It is not the ultimate solution."

Buoyed by the massive outpouring of support for Burhan and the armed resistance, there are rumours and reports of militant sightings coming from different villages, far and near. As the news of shift in the public mood reached their hideouts in dense forests and mountains, the resistance fighters are coming back to live among the masses, even if temporarily.

According to some claims, the youth with the guns are greeted with cheers and prayers, and showered with flower petals, a traditional Kashmiri welcome by the women. The youth receive them with open arms and plead to join them. However, if various reports are any indication, the recruitment process is extremely slow for the Hizbul Mujahideen faces a severe resource crunch.

But if the current levels of public support and goodwill sustain even for a while, the material calculus could change in not-so-distant future. It could seriously challenge the fragile peace in the whole region, setting up the stage for the much bigger human tragedies than India and Pakistan may be able to handle.

Kashmir: A new wave of resistance