Portugal overcame France after 10 defeats over 41 years to become the Champions of Europe. Their triumph will be inscribed in the annals of history as one of the most unlikely, but they were not short of grit and determination 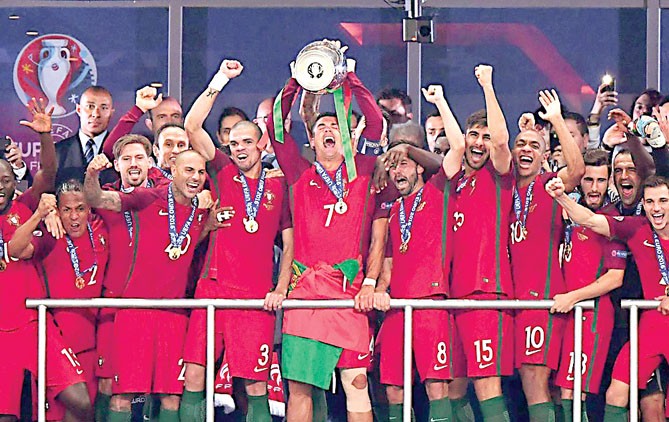 When a player is selected to represent his country at a major tournament, he doesn’t just carry his talent with him, but also the expectations of thousands of compatriots.

The rip-roaring success of a team is applauded by the fans, emotions run rampant when their favourite emerges victorious in a pulsating encounter, and tears are shed when the teams are dumped out.

Players demonstrate jaw-dropping skills; fiery tackles, sumptuous goals and saves are witnessed. But the title is lifted by the one that succeeds in holding its nerves till the very end.

The expanded 24-team Euro 2016 reignited the interest of fans in international football at a time when the world football governing body (FIFA) is reeling from its worst graft scandal.

The 51-match tournament invited the ire of players, managers and fans who labeled it "mundane" and "unnecessary".

An average of under-two goals per game speaks volumes. There were teams which made their debut at the biggest tournament after World Cup and shocked everyone by qualifying for the later stages. This fact cannot be denied that the competition saw drab performances, especially in the group stage, as "minnows" concentrated on settling for draws against the traditional giants by giving away possession and forming defensive shield, and opting against attack.

However, it was the first time that they had this experience. Iceland, a tiny island nation with a population of about 330,000, wouldn’t have even imagined that they would be featuring at Euro 2016 when the likes of the Netherlands failed to make the cut. They defied all the odds by knocking England out of the championship to advance to the quarter-finals! Playing against England, they relished every moment as they had always loved watching the English Premier League on their Television screens.

The new format might have been insipid, but it gave a huge boost to football in small countries in Europe which fancy playing at big events.

It will help their promising players land contracts at different clubs and hone their skills.

Wales were a surprise package and deserved to reach the final more than Portugal. They outclassed everyone with their inspiring and spirited display throughout the tournament.

Hosts France and Belgium were the two strongest teams, rich in exceptional talent.

England, who had maintained an unbeaten record in the qualifying round, entered the event as title contenders. It was after a long time that England had a great team combination. But wrong team selection and managerial gaffes dashed their hopes of a better show as they were left to rue the squandered opportunities.

Portugal managed to score a goal in the stipulated time only once in the tournament, which tells how lucky they were to be crowned the champions.

The team dubbed "one-man show", because of the stardom enjoyed by talisman Christiano Ronaldo in the world of football, only needed his support on the sidelines after he was stretchered off in the initial 25 minutes of the final. The team didn’t lose hope and stood firm against France. It was a much-needed triumph for Ronaldo who had won a trophy at every club he played for and now he can finally bask in national glory. A loss would have drawn severe criticism and probably forced him to follow the suit of Lionel Messi who called it quits after he failed to guide Argentina to the Copa America triumph.

Portugal overcame France after 10 defeats over 41 years to become the Champions of Europe. Their triumph will be inscribed in the annals of history as one of the most unlikely, but they were not short of grit and determination.

The bloated format turned out to be a blessing in disguise for Portugal. They ended third in the group stage. If they had been playing in the older, 16-team format, they would have been sent packing.

Drawing 24 teams into six groups was a bad idea as the eliminated teams in the group stage were the weaker ones. However, the later stages offered more when the two potential finalists had to lock horns in the quarter-finals, which allowed other teams to dream of the top honour.

Defending champions Spain were exposed when their defensive show cost them the group match against vibrant Croatia.

World champions Germany dominated their semi-final clash against France, but squandered their chances.

Ukraine, Czech Republic and Russia were the biggest letdown as they lacked quality and an effective game strategy.

French forward Antoine Griezmann, who failed to deliver in the final, was for me the star of the tournament. He pounced on the goal-scoring opportunities, found the back of the net and was the liveliest player on the pitch. He certainly has a bright future ahead of him.

The title would have meant so much to France which has been battling terrorism and financial turmoil.

The tournament was also marred by hooliganism. The streets of France turned into a battlefield as hoodlums attacked their rivals with iron rods and sticks, which was against the values of sports.

The refereeing was tremendous throughout. There was no major mistake contrary to what happened in the World Cup in Brazil.

For a higher-octane event, the UEFA should probably revert to the old 16-team format and also introduce a low-tier version of the tournament based on world rankings. It can be staged before the major championship with the top two teams progressing to the main event. This format would be livelier and keep the viewers glued to their screens.