As the country grapples with the effects of climate change, new approaches to sustainable development need to be adopted 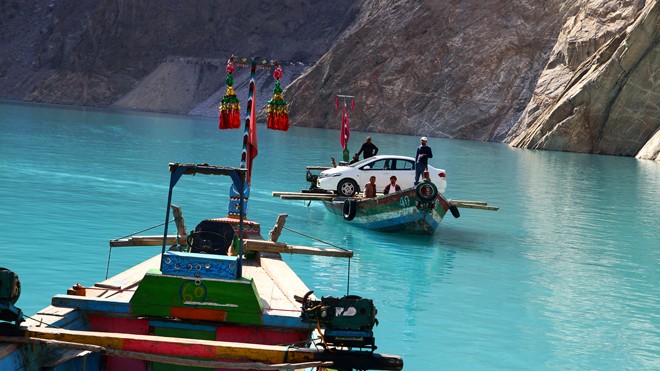 If the world is seen as a global coal mine, then glaciers play the role of a canary in this mine. The canary will sing to alert miners about an impending danger well in advance. These glaciers provide the perfect backdrop where one can see, touch, hear and feel climate change taking full effect. Unfortunately, climate change is still a very abstract concept among most communities of the world. But no matter how people perceive climate change, the phenomenon is real in the Hindu Kush-Himalayan (HKH) region; it is ever present, can be photographed and the changes unfolding before the naked eye can even be measured.

The northern mountains of Pakistan fall within the HKH region sharing the 4.3 million square kilometres boundary with countries like Afghanistan, Bangladesh, Bhutan, China, India, Myanmar and Nepal. Because of its sheer size and being the largest reservoir of snow and ice outside the Polar Regions, the Himalayas is often referred to as the "Third Pole" and the "Water Tower of Asia" as it store large volumes of water. Being the lifeline of over three billion people, which makes up one fifth of the world population, the HKH region is at the mercy of climate change and poses an immediate challenge to around 210 million people living in the region.

An array of environmental shifts in the region, such as infrequent weather events, untimely glacial melt, glacial lake outbursts floods (GLOFs) and changes in animal and bird migration patterns are highlighting possible linkages to climate change. An increase in the mean temperature has been observed in the northern areas of Pakistan, especially in Chitral district and the Gilgit-Baltistan region, over the past three decades as the mountains have started showing signs of wear and tear due to uptick in average temperatures in the region.

The rise in temperature is recorded to be the highest at higher altitudes and is more obvious during the cooler months than in the warmer months. This strange anomaly has had a profound impact on the seasonal variations in temperature, thus resulting in serious ramifications on the ecological calendars that mountain people have traditionally relied on to plan agricultural and cultural events.

"Seasonal indicators have ceased to function," says Noor Ali of Moorkhun Village, Gojal, district Hunza. "We are experimenting with ways to cope with the situation and yet we are unable to predict the best of times to sow, plough and harvest our fields. This is the most unusual weather pattern we have come across in our lives," he added warily.

In addition to rising temperatures in the mountains, which is said to be higher up-north than the global average of 0.74 degree Celsius, has been changing the characteristic and intensity of precipitation. Nature’s bounty that once fell as snow now comes down as rain, and rains have started arriving as early as the onset of spring resulting in the melting away of thin and vulnerable ice.

Similarly, the glaciers are not being replenished properly in winters as the snowfall period has shrunk, which makes it impossible for snow to become ice. Recently, this has resulted in an alarming trend of glacier retreat. For instance, the Hinarchi glacier in Bagrot valley of Gilgit district, has retreated 800 metres in 32 years between 1977 and 2009. What is more worrying is that the glacier has further retreated 300 metres between 2009 and 2014. Likewise, the Baulter glacier which had earlier retreated 1,500 metres, shrank another 400 metres by 2014. Similarly, Barpu glacier has shrunk 640 meters since 1977, which spells doom for the future of these glaciers.

Experts have predicted that most glaciers in the region would continue to retreat as they have been pushed out of balance by changes in the climate. In other words, the warming that is already in the pipeline, as it were, will only result in further loss of glacier and snow cover. This in return puts a lot of pressure on the mountainous region of the country with the mountain people, already considered to be among the world’s poorest communities, facing even greater hardships than before.

"These hydrological imbalances are having a direct impact on the lives of the mountain people," says Dr Babar Khan, Senior Conservation Manager WWF-Pakistan. He, along with the rest of the scientific community, believes that the changes occurring in mountain ecosystems may provide an early glimpse of things that will come to pass in low lying environments.

"With an increase in hydro-meteorological hazards in the region, an increase in climate induced human migrations is being witnessed. A constant fear looms over the heads of the inhabitants of this region of a potential mountain tsunami since the glacial retreat has led to the formation of around 2,420 glacial lakes at an alarming rate. These are often unstable and are only retained by fragile moraine dams. A total of 52 such lakes have been declared dangerous and even the slightest of tectonic movement can spell havoc in the region," he added.

Dr Babar Khan recalled the devastation caused by the flash floods in 2010 that resulted in the formation of Attabad Lake. "If the authorities concerned didn’t wake up after the Attabad incident that wiped off entire villages from the face of the earth, then what will it take to grab their attention? There should be no surprises anymore. We have to relinquish our capacity for surprise here. Our approach towards climate change is purely delusional which needs to be corrected."

At a time when the world seems to be worried about the cataclysmic effect of climate change and its influence on mountain regions, the topic is also gaining traction on the international level. So far, Pakistan has turned a blind eye to the plethora of potential dangers related to the destruction of the fragile ecosystem of the mountains.

According to Mary Robinson, UN special envoy for climate change, the changing weather pattern is a driver of migration and is expected to increase the displacement of populations. In the case of Pakistan, a steady pattern of such migrations of mountain communities to escape from the vagaries of nature is being witnessed at present. One such example is of the village of Darkot, situated on the Pakistan-Afghanistan border in the Hindu Kush range which has seen more than half of its population migrate further downstream.

It is estimated that by the year 2050, the world will have more than 1 billion "environmental migrants". Currently, it appears that countries falling in the HKH region account for 15 per cent of the world’s total climate change induced migration. This staggering number may create added pressures to achieve conservation goals as an increase is expected in the frequency and intensity of weather-related disasters which will raise the figures of climate change migrants even further in the near future.

Pakistan relies heavily on its 5,000 glaciers to meet its fresh water needs. The country is so precariously perched on these profound structural changes that if managed in a negligent and short sighted way, then the lives and livelihood of people depending on this fragile ecosystem will be endangered.

As the country grapples with the effects of climate change, new approaches to sustainable development that take into account complex interactions between climate, social and ecological system need to be adopted.