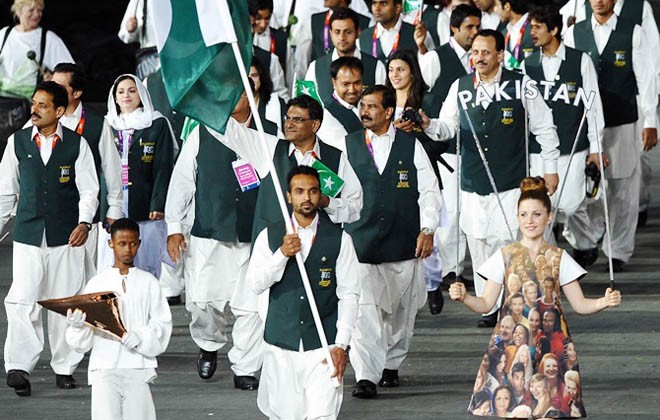 Pakistan will be sending its smallest ever contingent to the Olympic Games at Rio in August this year. Since 1948, when it first took part in the event, the Pakistani contingent in its distinctive green blazers has been dominated by its field hockey team, with eight out of the 10 medals Pakistan has won at the Olympics going to this sport. This haul includes three gold medals won in 1960, 1968 and 1984.

But since Barcelona in 1992, when it clinched the bronze in hockey, surprising many, Pakistan has won no medals. This blank space against the medal column which is now running into its second decade makes Pakistan is the largest nation in terms of population not to win an Olympic medal.

For identical reasons, it has struggled to gain places on wild cards and quotas to send even its tiny contingent to Rio. This time the group is made up of two athletes -- Mehboob Ali and Najma Parveen, two swimmers -- Haris Bandey and Lianna Swan, Judoka Hussain Shah and two shooters -- Ghulam Mustafa and Minhal Sohail. The seven will not be joined by any of Pakistan’s boxers whose failure to qualify for even a single berth at their last opportunity in Baku, Azerbaijan last month delivered another blow to Pakistan’s Olympic sport.

Pakistan is then the nation with the largest population not to have won a medal for so long a space of time and not to have direct qualifiers for the Games. In contrast, Nigeria, a country lower on the development and poverty scale than Pakistan and with an equivalent population of around 170 million, will be represented by at least 50 athletes, in track and field events, boxing, canoeing, basketball, football, rowing, table tennis and other sports. Pakistan needs to look at its own failures to make a respectable mark even at Asian level and thereby gain continental slots. Only Hussain Shah was able to get a quota spot on this basis.

When we follow Pakistan’s tiny team as it walks in to the massive stadium at Rio, we will instantly be reminded of how much Olympic participation, Olympic success and also sporting success at the international platform links in to the question of identity, national pride and national spirit.

Sport has been described by anthropologists such as Desmond Morris as the modern day equivalent of war. It has the same metaphors, expressed as national flags, national colours sometimes painted onto bare skin, arenas, soldiers who stride forward as their supporters urge them on and patriotic spirit as anthems are played and banners raised. This may not be entirely desirable in a purely philosophical context.

But in a real one, sport plays a definite part in binding people together, giving them hope and giving them joy, especially as when there is little else to look towards in a country burdened with many causes to grief.

It must therefore be of relevance that the children of Lyari in Karachi look beyond our own borders for heroes, adopting figures such as the late Muhammad Ali, boxer Amir Khan of the UK who at the last minute turned down a bid to have him don Pakistani colours and Brazilian football heroes beginning with Pele and going on to the present generation. The faces behind the yellow shirts of Brazil may change; the aspirations of the Pakistani boys and girls -- wearing them do not. Their donning of these shirts is a reminder that we have given them none to claim as their own.

The reasons for this are something that the Pakistan Olympic Association (POA), an affiliate of the International Olympic Committee, needs to explore in some depth. Sports after all opens up roads to opportunity and roads to hope, pulling children off the street and offering a point around which nations can unify.

The POA presides over 22 sporting federations, which represent sports included in the Olympic Games and 12 others that represent non-Olympic sports including kabaddi. The performance of these federations is in urgent need of review. It is also not insignificant that Pakistan’s slide down the medal table to a point where it no longer figures at all goes alongside its economic, social and political downfall which effectively began soon after 1948 and continued into the decades that followed. Sports then in so many ways mirrors the health and well being of a nation.

It is true that Pakistan spends a minuscule portion of its GDP on sports, barely one per cent, with the situation made even more complex by devolution in 2011 with sports devolved to the provinces, giving it to them to generate revenue. The Pakistan Sports Board, set up in 1962 as a corporate body intended to promote sports and funding for it, has struggled to perform this task. At present, cricket is effectively the only sport that generates revenue in terms of public sport and patronage. Efforts have been made to promote others, including futsal, with limited success. The consistent backing a sport needs to take off from the ground has not been in place.

Reeling from the shock it has received with field hockey falling to new depths, the Pakistan Hockey Federation appears to have suddenly woken up and launched the first ‘five a side’ tournament under its new ‘fast’ league. The league features teams which include the Lahore Lions, Karachi Sharks and Peshawar Panthers. We will need to see how this effort proceeds and whether it will link in to any overall revival of field hockey, a sport that has fallen so sharply in fortune that today it is said there are barely 50 players to choose from when it comes to national team selection.

As all schoolchildren are taught in their meaningless Pak Studies lessons, field hockey is of course Pakistan’s national sport. The fact that so few among those today in classrooms have seen the game being played says something about the manner in which we treat sport and with it the question of national glory. A small percentage of the population remembers the day of Pakistan’s hockey glory and the excitement that came when the national team reached a major world final.

The revival of sports can only come in small steps. We will hear outcry over Olympic performance this time as has happened in the past. But until this is linked in to a greater drive to promote sports and find funding for it, there will be no change in the medal table or Pakistan’s place on it as a nation without a single medal to its credit.

The shifting sands in Afghanistan

Crime in the capital