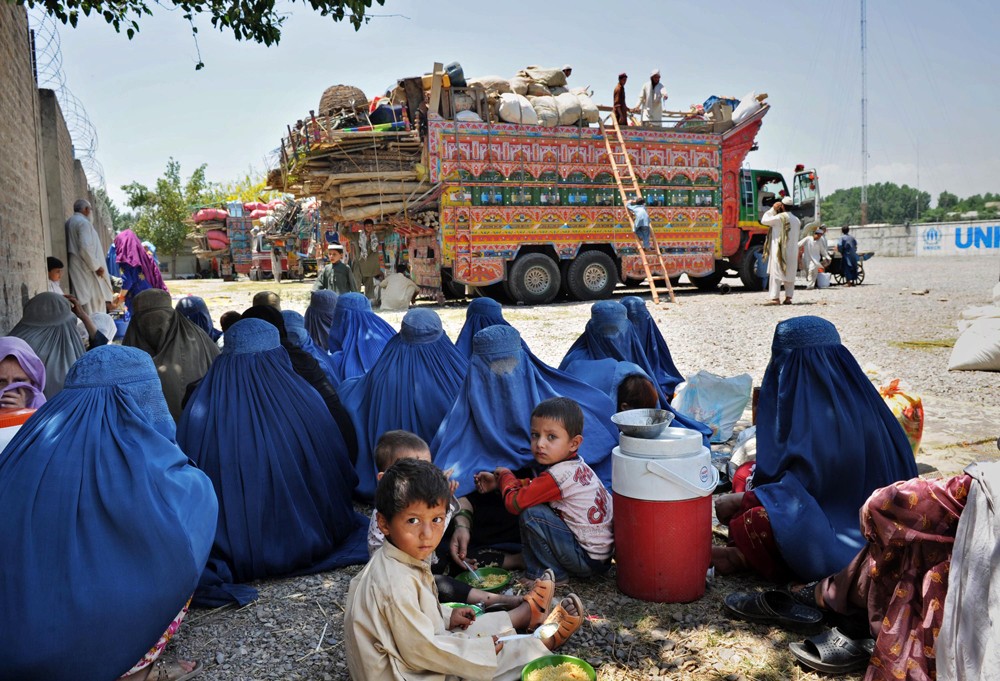 The recent tension at the Torkham border between Pakistan and Afghanistan has intensified the demand of the general public in Khyber Pakhtunkhwa and the tribal belt for early repatriation of Afghan refugees, even those who are legally staying in the country.

According to an official of the United Nations High Commissioner for Refugees (UNHCR), the number of Afghan refugees has been reduced from 3.9 million to 1.5 million after the volunteer repatriation programme was launched in Pakistan in 2002.

The UN also admits that a similar number or more have been living without Proof of Registration (PoR) cards in Pakistan, a majority of them being Pashto-speaking based in KP.

However, Afghan Consul General at Afghan Consulate in Peshawar, Dr Abdul Waheed Poyyan, claims that about 2.5 million Afghan refugees, possessing PoR cards, live in Pakistan at the moment of whom some 2.0 million are based in KP.

"If the number of new-born babies to their registered parents are counted then the number of legal Afghan refugees increases to more than 2.0 million only in KP alone," he informs, admitting that the UNHCR had failed to provide legal protection and basic facilities to these refugees inside and outside their camps in Pakistan.

The legal status of these Afghan refugees will expire after June 30 this year as the federal cabinet of Pakistan is yet to decide extension of their registration cards after the Tripartite Commission comprising Afghanistan, Pakistan and UNHCR had recommended to the Pakistan government to prolong the stay of Afghan refugees for certain reasons in Aug 2015.

The PoR cards had to expire by the end of 2015 but under an interim arrangement, the Pakistan government extended the stay of Afghan refugees till June 30 this year.

The Pakistan Tehreek-i-Insaf led government in KP has demanded return of the Afghan refugees from their province time and again or that, at least, their movement should be confined to refugee villages.

After the terrorist attack on the Army Public School in Peshawar in December 2014, the KP government had given a deadline of one month to the federal government for forced evacuation of Afghan refugees from the province. That led to harassment of the Afghans by the local police.

After skirmishes on the Pak-Afghan border at Torkham and its coverage on the media, particularly social media, has added to the distrust between the people of both the countries who held protest rallies in support of their respective armed forces.

A protest rally of the business community in Peshawar was organised for early return of Afghan refugees and clashes took place between Afghan and Pakistani spectators during a cricket match at the University of Peshawar.

Samiullah, a representative of local businessmen union in Peshawar, complains that a majority of Afghan nationals have occupied their business in the local markets without paying any taxes to the Pakistan government. "Most of the influential and resourceful Afghans have obtained Pakistani citizenship and legal documents for their stay in Pakistan through unfair means and it is high time to check their identity and PoR cards."

Samiullah led a protest rally a week ago against Afghan nationals in front of the Peshawar Press Club.

On contrary, Nisar Mohammad Khan, an activist of Pak-Afghan Peoples Forum, says most of the Afghans were born and bred in Pakistan and have not even visited Afghanistan. So, the Pakistan government should either prolong their stay or legislate to grant them citizenship of the country. "Afghans who respect our law and live a peaceful life in Pakistan should be treated differently as compared to those who are creating problems."

Dr Poyyan, who lived as refugee for six years in Peshawar, respects the Pakistan government and its people for allowing Afghan refugees to stay in Pakistan. "The Afghanistan government wants an honourable return of Afghans to their homeland. We are making alternate arrangements for permanent settlement of the refugees living outside the country".

According to UNHCR, more than 60 per cent of Afghan refugees are living outside their camps (refugee villages) while about 30 per cent still live inside refugee villages. Many of the old and populated refugee camps, like Kacha Garhi, Pajjagi, Shah Alam, Nasir Bagh and Zangali in Peshawar; Jalozai and Azakhel camps in Nowshera, and many more in the province and the tribal areas no more exist.

UNHCR spokesperson in Islamabad, Dunya Aslam Khan, says the visit of UNHCR global chief, Filippo Grandi, to Pakistan recently was aimed at discussing the issues of Afghan refugees in Pakistan and extension of their stay beyond June 30 in Pakistan.

She says the federal government has yet to endorse the decision of the tripartite commission on Afghan refugees in August last year "because Prime Minister Nawaz Sharif is in London for his medical treatment and the federal cabinet will need his approval for the extension of Afghan refugees stay in Pakistan."

The UNCHR and Afghanistan government have requested Pakistan to prolong the stay of refugees by the end of 2017, she says.