Do they still sing qawwali?

The memory of a qawwali night from last year Ramzan at NAPA, which luckily is happening this year too 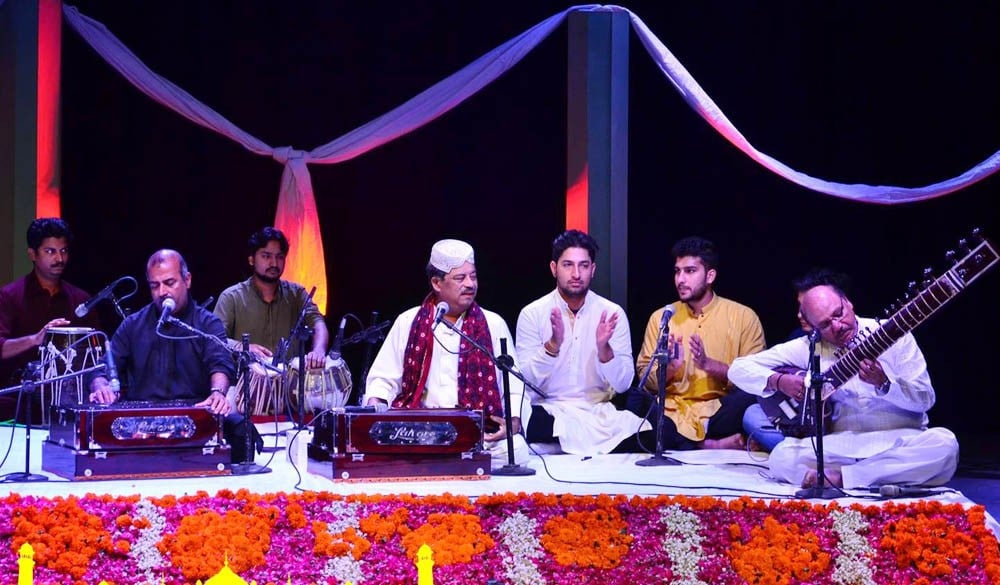 Rarely have I missed ‘home’ in the nine months since I moved to Toronto. I’ve missed my nieces and friends; resented the weather and public transport; fantasised about dhaaga kebabs and missed having someone to make tea in the morning.

But nothing worthy of a flashback other than the memory of a qawwali last Ramzan.

Confession: I’m a qawwali neophyte; I ‘discovered’ the genre at T2F just two years ago. My ignorance is fairly inexcusable: I lived in Karachi most of my life, grew up at a time PTV aired qawwalis at prime time and Nusrat Fateh Ali Khan was a global sensation. I’m endlessly fascinated by the human voice as a musical instrument, fancy myself quite the amateur singer and was learning to play the tabla once upon a time. But I never ‘got’ qawwali.

And yet the memory of a Farid Ayaz-Abu Mohammad qawwali at the National Academy of Performing Arts has triggered an inexplicable longing for home.

The evening itself wasn’t exceptional. The heat wave had flambéed Karachi and left in its wake scores of limp, muggy nights and listless, shuffling people. Even the thought of a midnight-to-dawn performance was exhausting. The stage was admittedly glorious: an 18-foot bank of flowers fronted the dais in a blaze of saffron, magenta, vermillion and white. But the auditorium was too thinly populated to justify this excess.

It wasn’t the troupe’s best performance even; the singing was strictly competent at best. They started late; ended on the dot. Pakistan’s most famous qawwals today, the duo raced through the chartbusters and seemed taken aback when asked for a couple of the less mainstream qawwalis. Far from the haal one was supposed to be experiencing, the mind wandered quite a few times…

The sehri, however, was exactly what it ought to be: greasy parathas, shikari qeema, desi omelettes, aaloo ki bhujia and copious amounts of sweet lassi.

And yet, that imperfect night has come to signify home in ways both deeply personal and political.

The qawwali symbolised the pluralistic version of the Islam my ilk and I subscribe to but rarely bother to defend to others.

Among the best things about a mid-life crisis (a divorce, in my case) is how it opens one up to a new range of possibilities. I went to the Napa qawwali because this time last year, I was curious about who I could be if I weren’t me.

Part of this was about making an effort to do things I enjoy but had always been "too busy" to do. About venturing out of my comfort zone; seeing through my flimsy excuses and surmounting my fears. But the other part had to do with what I believe and what I’m willing to stand up for.

For those of us resisting Wahhabisation, one zuad at a time, public space in Pakistan has shrunk progressively these last few decades. The qawwali symbolised the pluralistic version of the Islam my ilk and I subscribe to but rarely bother to defend to others. Earlier, because we were scared of being misunderstood or shouted down; later, because we were scared, period. Attending the qawwali was thus about resistance, about defiance. It was a (seemingly futile) act of political activism in order to reclaim my inch of space within Pakistan’s religious dystopia; an attempt to win back the right to define the Muslim I am in contemporary Pakistan.

Finally, the qawwali was about Karachi and how such events make it feel like a real, living city in spite of the police containers, the sand bags and the no-go areas. All of us there that night had spun a little fiction for ourselves: that Karachi was safe at night, that culture and artistic expression exist and can thrive on our support alone. That if we cared enough to come out, things would improve. If nothing else, all of us were bound with that tenuous hope that night.

And that’s what this missing, this longing is about.

It is not really a desire to be physically present in the land of my birth: waves of South Asian migrants have rendered this city desi enough to carry my favourite Tapal at many supermarkets. This longing is the last line of a powder blue aerogramme -- umeed hai aap sab bhi khariyat se honge -- that is part hope and part prayer.

Do they still sing qawwali?