Where there is no honour 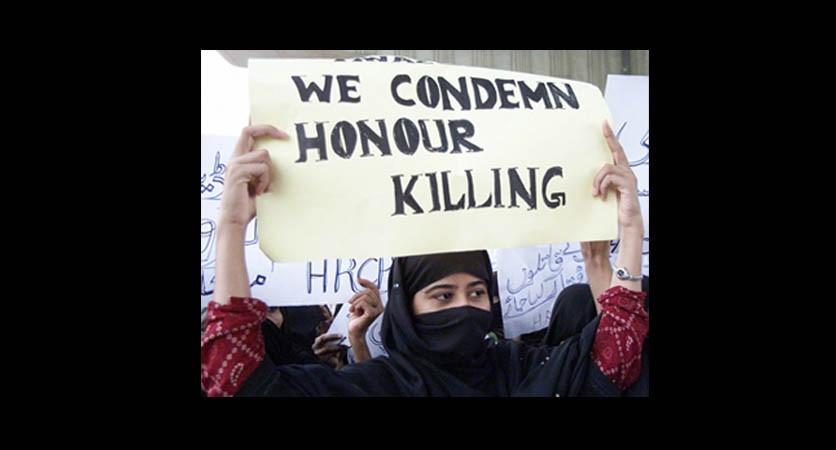 The practice of honour killing, a salient form of gender-based violence in Pakistan, is not unique to our socio-cultural context. Any conversation on our criminal justice system’s capacity to grapple with it, however, must be cognizant of the complex interplay between law, religion and social norms.

It is only when we extricate these nuances that we can begin to conceptualise the "living law," as envisioned by scholars like Ehrlich -- the law that "dominates life itself even though it has not been posited in legal propositions". The challenge that arises then is how we can counter and regulate this entrenched ‘living law’ when it leads to regressive outcomes and egregious violations of human dignity.

However, it is first necessary to examine the formal legal status of honour killing in the status quo, enunciated in the Pakistan Penal Code and the Code of Criminal Procedure. The remnants of Ziaul Haq’s regime of Islamisation linger in the sustained influence of the Qisas and Diyat Ordinance.

Section 302 of the Penal Code delineates two forms of punishment for "qatl-i-amd if committed in the name or on the pretext of honour". The first is death as qisas, for which Section 304 establishes a stringent standard of proof or a "voluntary and true confession" by the accused, or the fulfillment of a high evidentiary requirement. In the absence of these prerequisites, the secondary punishment for honour killing is death or life imprisonment as ta’azir.

In theory, the law seems to provide an effective mechanism for sanctioning murder committed in the name of honour. The situation is complicated, however, by a subsequent section of the Pakistan Penal Code that allow the heirs of the victim to waive their right to qisas, or to compound it in return for financial or material compensation. This sets the stage for the perpetrators making a self-serving confession of their horrific acts of violence against their daughters or sisters.

Section 311 of the Penal Code attempts to create room for judicial discretion by ascribing courts with the power to punish offenders with "death or imprisonment for life" as ta’azir even where the right to qisas has been waived or compounded.

Courts in such scenarios derive the legitimacy to act from the principle of ‘fasad-fil-arz’, which allows them to consider factors such as the offender’s "past conduct" and the "brutal and shocking" nature of the offence that is repugnant to the "public conscience". However, the scope of such interventions is limited by Section 338-E of the Penal Code, which reiterates the significance of the "consent of the parties" in shaping the conditions imposed by the Court where an offence has been waived or compounded.

The ultimate impact of these legislative provisions is the creation of a sphere of privatised ‘justice’ that allows the perpetrators of honour killing to be absolved of liability, entrenching the notion that victims’ next of kin are the custodians of their ‘honour’, and ultimately, of their right to life.

Asad Jamal, a human rights lawyer who has worked on several cases involving honour crimes, including that of Saba Qaiser, the survivor of an attempted honour-killing chronicled in "A Girl in the River: The Price of Forgiveness", is critical of the current marginalisation of the state. "Even in cases involving ‘fasad-fil-arz’ that are considered repugnant to the public conscience, the court is not really empowered. It must ultimately allow compoundability or waiver of qisas with the consent of the parties involved."

In addition to its substantive inadequacies, the existing law on honour killing is underpinned by various technical ambiguities that may be abused and distorted in practice. A salient one lies in the interchangeable use of the words "offender", "accused" and "convict" in the relevant provisions of the Penal Code. This is of particular significance when the perpetrators of honour killing are also the victim’s next of kin.

Even in the aftermath of the Criminal Law (Amendment) Act 2004, which amended the law to prevent the accused or convict from acting as ‘wali’ where he or she had committed the murder in the name of honour, there is still room for reform. According to Jamal, the existing discrepancy may create a scenario where the victim’s next of kin, who is accused of having committed the offence, but has not yet been convicted, may act as ‘wali’ and allow the offence to be waived or compounded. The information provided to the police may thus misrepresent the case as having been settled between the parties. In this way, cases can become distorted and fail to go trial. "Trial is a lengthy process which requires many resources. In the presence of such ambiguities, police may consider cases at face value and choose to bury them instead of pursuing further investigation."

The efficacy of legislation and judicial advancements is inextricably linked to the attitude of police departments and investigating agencies tasked with the registering of cases and the collection of evidence. Waqas Hasan, the Assistant Inspector General of the Crime department in Punjab, alludes to the fact that these institutions are ultimately embedded in the socio-cultural context in which they operate. "Police ultimately come from the same society that condones honour killing, implicitly if not explicitly. The law on its own cannot achieve anything."

I.A. Rehman of the Human Rights Commission of Pakistan is also critical of the operation of investigating agencies that fail to take cases of honour killing seriously.

Ultimately, however, these factors must be considered in the broader context of the patriarchy and misogyny that characterise our society. According to Rehman, "These crimes have increased because our society has become more conducive to the commission of such offences. There is less sympathy for victims, while the perpetrators face no penalties."

Hasan echoes his sentiments, "Until the broader issues are solved, the issue of honour killing cannot be addressed in isolation. There is a strong need for an alternative narrative and the promotion of critical thinking in our society." Asad Jamal, too, believes that it is the systemic impunity that must be dealt with.

The situation is exacerbated by the presence of parallel courts, such as jirgas and panchayats, which endorse honour killing as a form of retributive justice. These bodies enjoy great social influence and acceptance, being embedded within communities and consisting of tribal elders who are traditionally accorded respect. Rehman also points to the problematic aspects of Shariah courts, which pose a significant challenge to the principle of state sovereignty. He says we must be critical of the appointment processes of these courts and of the sources of their authority.

On another level, it is necessary to analyse the emergence of a renewed campaign to reform the law on honour killing, delineated in proposed legislation like the Anti-Honour Killings Laws Bill 2014. While the abolishment of compoundability for honour killing would be an invaluable development, any comprehensive reform must address several key issues.

It must seek to define and delineate clearly the meaning of "honour killing" as the existing definition is circular in nature. It must also grapple with other bodily harms and attempted honour killings, as the principle underlying the act must be countered in order for any legislation to be an effective deterrent.

Rehman also suggests a major substantive reform to the Qisas and Diyat Ordinance. "An effective mechanism may be the creation of a double-tiered system, whereby every offence will be delineated as an offence against the party, as well as the state. If the parties consent to forgive an offence, state will have to determine whether the offence should be forgiven." In this way, an additional, crucial layer of scrutiny will be added to the process, ensuring that honour killing is not compoundable in practice. Such a reform, albeit radical in nature, will serve to effectively eliminate the possibility for distortion and ambiguity that currently exists in our legal system in the context of honour killing.

In conclusion, there are significant legislative and judicial advancements that must be made in order to propel significant social change in our narrative of patriarchy disguised as religiosity. These advancements must seek to transform both the formal, substantive law, as well as the influence of social norms and parallel judicial bodies that seek to sustain the status quo. The Council of Islamic Ideology continues to oppose amendments that will bring clarity and assure punishments for the perpetrators while paying lip service to honour killing not having any religious sanction.

Where there is no honour