Now in its fourth year, the upscale Fashion Parade continues to put high-end fashion from this part of the world on a western map 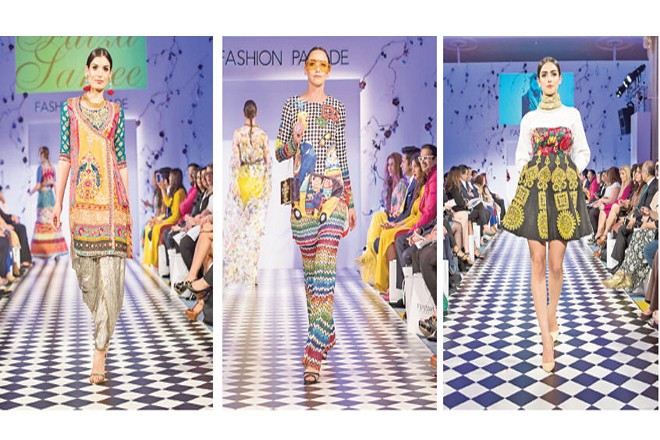 Luxury Mandarin Oriental Hotel in Knightsbridge lit up when some of Pakistan’s finest fashion designers joined hands with other well-reputed names from South Asia for the 4th Fashion Parade, held recently in London. The annual event, brainchild of Sadia Siddiqui (former model and founder of Mustang Productions) has become an essential diary entry for anyone interested in high-end Pakistani and Asian fashion in London. Consistently happening for four years now, Fashion Parade has managed to project a very high-end image of Pakistan’s top fashion and this year was no different.

"Our idea with Fashion Parade is not only to promote fashion but to celebrate the best of South Asian fashion," Sadia Siddiqui spoke to Instep at the event. "Our fashion industry has immense potential and we are keen to promote new blood in fashion, as well as celebrate the industry’s veterans. It’s amazing that so many people have come together to celebrate Asian fashion in bigger numbers than ever before. Asian fashion arrived in the west a long time ago but it’s gaining recognition at a level never heard of before."

Indeed, the event has been gaining recognition in the city, picking up a steady list of high profile guests who turn up to support an industry that puts up a very glamorous image of Pakistan. As pools of tall, statuesque foreign models walked down the chequered catwalk, sashaying in vibrant creations from the designers, Fashion Parade’s front rows buzzed with a list of notables. One spotted Olivia Grant, Nancy Dell’Olio, Lizzie Cundy, Amy Jackson, former Pakistani Prime Minister Shaukat Aziz and leading Indian designers, Faiza Samee, Seher Tareen, fashion model turned designer Hira Shah, Nomi Ansari, Ali Xeeshan, Saira Rizwan, Mehreen Noorani, Raishma and Hassan Shehryar Yasin. Rumour had it that the newly elected mayor of London, Sadiq Khan would make an appearance but unfortunately he could not. Moreover, funds were raised for charity Save The Children half way through the event.

"Pakistani fashion designers have brought colour to this event," Sadia Siddiqui added, in her conversation with Instep. "Their designs have been adored by everyone and their fusion is just very creative and amazing. I am delighted by the response we received from Fashion Parade. I feel it’s a defining moment for Pakistan, as last night we celebrated Pakistani culture at its best and our guests – designers and also the media – have all been so supportive."

Content is the backbone of any fashion show and one has to appreciate the lineup of very desirable names that Fashion Parade organisers had managed to bring together. This year’s event featured Faiza Samee, Nomi Ansari, Ali Xeeshan and HSY as highlights with Studio S by Seher Tareen and Saira Rizwan onboard as very smart additions. Also on the lineup were Khushboos by Chand, Mehreen Noorani, Raishma and fashion model turned designer, Hira Shah. HSY, it must be added, presented a thumping finale.

"Pakistani fusion is loved by everyone I meet across the globe," he said at the event. "Pakistan’s fashion industry has shown creativity and relevance over the years and many anchors of the industry have worked hard to gain recognition for it."

Nomi Ansari, a designer who shows in London frequently and has a huge expatriate clientele said, "I keep coming to London because this city appreciates fashion like no other place. Pakistani fashion designers are making a huge difference at so many levels. I have brought my luxury prêt Joyride to London to showcase how Pakistani designers keep innovating new things. It features structured silhouettes and makes a liberal use of bright hues. I have enjoyed every moment of Fashion Parade."

Veteran Pakistani couturier Faiza Samee, who rarely shows in Pakistan anymore, had created a collection specifically for the show and she explained how it was a juxtaposition of pattern and colour, reflecting the face of fashion today with a fusion of silhouettes and a variety of shapes and lengths. She said the organisers were very fastidious about the finer details and she put in a lot of effort to make sure everything was as perfect as it possibly could be.

Saira Rizwan is a name that is rapidly gaining momentum in Pakistan and her collection for Fashion Parade, called Omorfi, which means beautiful in Greek, was inspired by the beautiful city of Santorini; the colours in the collection were the colours that the designer felt this summer. "I have met many designers and buyers in London and they have shown immense interest in my work," she shared. "I am very happy to be part of the Fashion Parade."

Seher Tareen of Studio S said her latest collection took inspiration from the beautifully complex world of the ballet. The Russian ballet Swan Lake and the dreamy paintings of Edgar Degas were in special focus. Seher Tareen had previously shown this collection in Lahore (as did Nomi Ansari and HSY) but it worked since it was new to London.

Designer Raishma showcased her pret and couture collections and the event was her introduction to the British market. Coming from a couture and bespoke background, Raishma is renowned for creating striking gowns. A huge feat for her brand is that it is now being stocked at premium high street department stores John Lewis and House of Fraser.

Mehreen Noorani’s capsule collection’s theme was ‘All laced up with fringe benefits’: a versatile collection of semi-couture jackets and capes, statement separates perfect for resort and pre-fall. Khushboo showcased her couture range of luxurious dresses that epitomise the woman of today elegantly with decadently framed cuts, pearl jewel embellishments and an array of blush pastel hues. Her ethereal collection was crafted with a lot of detail and precision.

Hira Shah, better known to us as fashion model, made her debut as a designer with this collection. She incorporated a lot of soft lace in her collection and while it didn’t make much of a statement, it was pretty and had the potential of being a commercial success. Shah explained how her work showcased a fusion of eastern influences with western silhouettes. She said she was based in London but regularly traveled to Pakistan for projects and now for her growing fashion brand.

The very talented theatrical designer, Ali Xeeshan, who always has a couple of surprises up his sleeve, paid tribute to the equally whimsical Prince. The designer said the collection was very special to him and close to his heart.

Speaking to Instep, Shaukat Aziz said events like Fashion Parade shift perceptions of Pakistan. "Our country needs soft cultural marketing. After all, Pakistan is a country rich in art, culture and heritage. Pakistan’s fashion industry is so vibrant and the collections showcased at Fashion Parade took flavours of the East and mixed them with Western influences, which worked incredibly well."

We’re already looking forward to what the Parade brings us next year!

The writer reports for Geo News and Jang group from London. Contact: ams0409@gmail.com