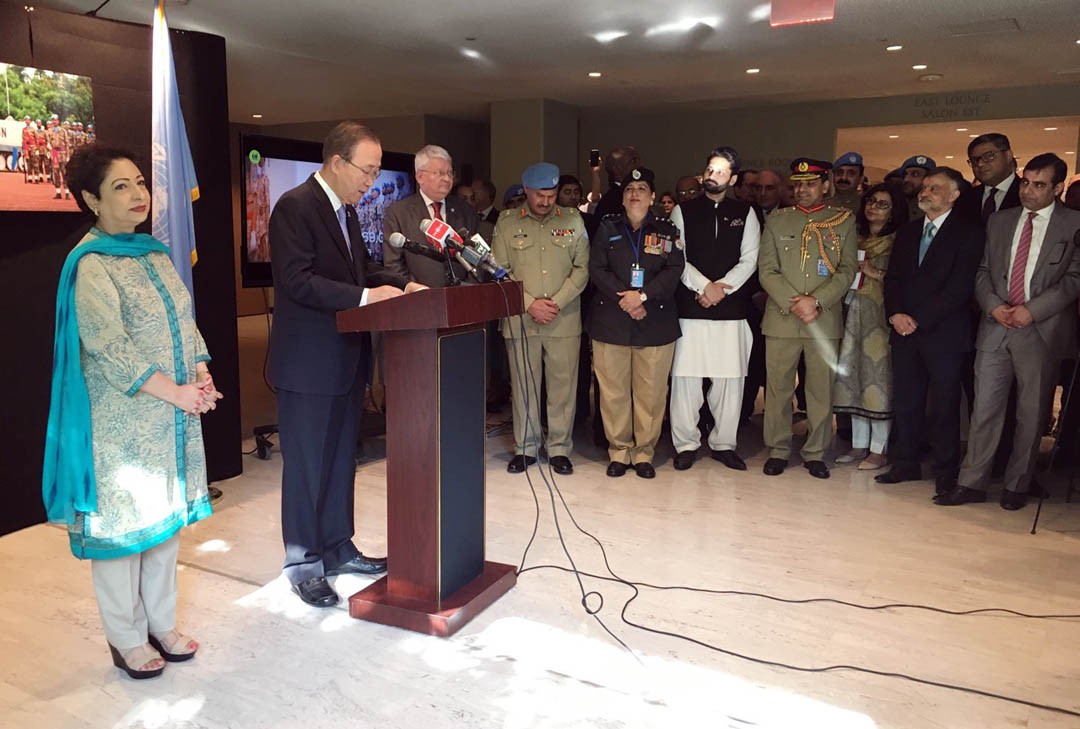 There was a small flurry of activity at the glass door to the side of the hall overlooking the courtyard of the United Nations Headquarters in New York City on June 1, 2016 as the UN Secretary General Ban Ki-moon walked in, accompanied by plainclothes security.

Permanent Representative of Pakistan to the United Nations, Ambassador Dr Maleeha Lodhi received the Secretary General, invited as Chief Guest to the reception to commemorate Pakistani Peacekeepers Day at the UN. The event was marked with a photo exhibition and launch of a website archiving Pakistan’s involvement in the UN’s peacekeeping missions.

Since 2011, this annual event has been held at around this time in honour of the 24 Pakistani peacekeepers killed on a single day (June 5) in Somalia in 1993. The commemoration is distinct from the annual International Day of United Nations Peacekeepers on May 29.

The photo exhibition, held along the length of the hall in the Curved Wall area, provided a visual, chronological testimonial to the Pakistani peacekeepers’ contributions to the UN since their first deployment to the Congo in 1960. These contributions are not just security focused and aimed at protecting civilians, but also as care-givers, most recently in the fight against Ebola in Liberia, as Dr Lodhi said in her welcome address.

"Almost invariably, they also contribute to the economic and infrastructure development of the countries where they are stationed."

A couple of hundred diplomats, military advisors, UN Secretariat personnel and prominent members of Pakistani community and civil society activists mingled in the hall over tiny samosas and other hors d‘oeuvres being served by uniformed wait-staff.

Many congregated by the roped-off area marking a respectable distance from the podium, some taking selfies against a backdrop announcing the event, flanked by the Pakistani and UN flags.

The Lahore-based Deputy Superintendent of Police (DSP) Shahzadi Gulfam, the first recipient of the International Female Peacekeeper Award in 2011 was there, having flown in especially for this event.

"We have to change the narrative about how Pakistan is perceived by showing the world our ‘normal’ side," says Dr Lodhi…The aim is to put "cultural diplomacy front and centre."

Also present was the lawyer and activist Mohammad Jibran Nasir, whom Pakistan’s UN mission had flown over to launch a website in tribute to UN Peacekeepers from Pakistan -- http://pakpeacekeepers.org.

About a dozen Pakistani-origin professionals (doctors, businesspersons, finance managers, journalists and others) had taken the time and trouble to drive or fly in from various places around the US to attend the event at Jibran’s invitation. Many of them had first come together around the activism catalysed by the Taliban attack on Army Public School, Peshawar, on December 16, 2014. Their rallying cries included the social media hashtags #NeverForgetPakistan and #ArrestAbdulAziz.

Jibran’s non-profit organisation Never Forget Pakistan developed this website over the past year after his chance discussion with Dr Lodhi last year while he was giving talks at campuses and community centres around the USA. The tour, sponsored by local activists and Pakistani origin professionals (some of whom were present at the UN reception), had sprung from the activism.

Never Forget Pakistan, registered as a non-government organisation in February 2016, aims to memorialise Pakistan’s unsung heroes, shape a more positive narrative for Pakistan and contribute to policy making. The organisation does not accept any foreign funding or grants, and is supported by Pakistani activists and board members. The NGO’s first and most high profile project is the court case against Abdul Aziz of Lal Masjid. Another initiative that went viral on social media was their support for the Pakistan women’s cricket team with the #GirlsinGreen.

The Pakistani heroes whose lives the NGO is archiving include Aitzaz Hassan, the 14-year old school boy in Hangu who died tackling a suicide bomber in 2014 as well as the students and teachers who died in the APS attack, besides activists like Sabeen Mahmud, Perween Rahman, and Rashid Rehman to name a few, who were targeted for their work and pluralistic ideals.

Talking with Jibran in New York last year, Dr Lodhi remarked how wonderful it would be to have a website like that to document the 145 Pakistani Peacekeepers who have died in UN missions. Jibran ran the idea by the Never Forget team on his return to Pakistan and they began working on it.

When Jibran again visited the USA in April 2016 to give a talk at Columbia University, New York, he showed Dr Lodhi what his team had done.

"She was pleasantly surprised by the results," Jibran said later. "The entire concept, script, and project, from start to finish, is our independent effort -- a civilian contribution (to Pakistan’s UN Peacekeeping legacy)."

The only input Pakistan’s Peacekeeping division at the UN gave him, he said, was images and other data after Dr Lodhi’s office connected Jibran to them.

Presenting the website at the reception, Jibran explained that it highlights Pakistan’s contributions to UN peacekeeping, with a dedicated page, the Wall of Valour, in tribute to the 145 UN Pakistani Peacekeepers who lost their lives in the line of duty. It includes their biographies with a map of all the areas Pakistani Peacekeepers serve with a summary of their contributions.

The UN event, said Dr Lodhi, was meant to pay tribute "not just to Pakistani peacekeepers, but peacekeepers from all other Member States who put themselves in harm’s way to keep the weak and the vulnerable safe."

"We are privileged to have the Secretary General with us," she said, noting that he is "among the world’s most powerful Commanders-in-Chief, leading 120,000 UN peacekeepers around the world."

As she pointed out, with the nature of the threats to world peace changing, so do the modalities of peacekeeping. "In the age of complex conflicts and asymmetric warfare, UN Peacekeepers are exposed to much greater risk than ever before. The Blue Helmet, a symbol of protection, is itself often the target."

As the UN Secretary General took the podium, his greeting of "As-Salam Alaikum" received a warm and vocal response from the gathering.

Ban ki-Moon termed Pakistan as "one of the most consistent and reliable contributors to United Nations peacekeeping."

"You should be very proud - just as we are deeply grateful to Pakistan," he added. Pakistani units, he noted, have been instrumental in improving the political and security situations in places like Côte d’Ivoire and Liberia and have also been actively engaged in New York.

The Secretary General highlighted "the excellent performance of senior Pakistani military and police officers" in the field.

"We have to change the narrative about how Pakistan is perceived by showing the world our ‘normal’ side," says Dr Lodhi. That is something she has been focusing on since her appointment to the UN, with ground breaking art exhibitions and musical evenings. The aim is to put "cultural diplomacy front and centre," and build on Pakistan’s intellectual contributions to the UN over decades by people including Patras Bokhari, Agha Shahi, Munir Akram, Jamshed Marker and Dr Nafis Sadiq.

"Frankly, I was surprised," she adds. "I never knew we had so much respect here."