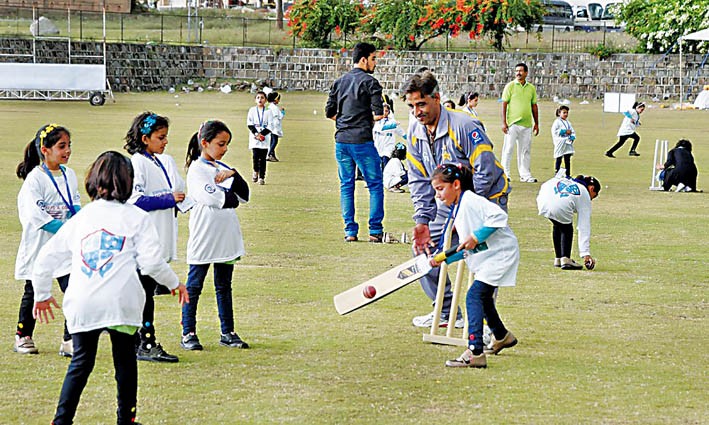 In Pakistan, cricket is the game most familiar to both genders, and owing to that comparatively easy for the newcomers to pick up.

The festival included five days of coaching for eighty girls, organised within the schools and two days of inter-school competition at the Marghzar Cricket Ground.

Most girls covered by the programme had never played cricket, but interestingly all were well informed about the Pakistan team players.

Around 20 players were picked up from each school. The girls were very excited, bubbling with energy and enthusiasm, with smart coloured outfits adding to the liveliness.

Tennis balls with light youth-size bats were used for the practice sessions. The girls were quick to pick up the basic batting skills, with almost everyone wanting to imitate a fast bowler’s run-up, but when delivering the ball, finding it hard to bowl with conventional turn of arm.

Girls with hearing impairment showed wonderful understanding of the game. The saturation television coverage these days has obviously made an impact.

The first day of the competition had robin league matches and SOS Schools finished at the top of the points table, followed by Mashall Charity Schools, Islamabad Special Education School and Pakistan Sweet Homes.

The second day of competition saw matches on knockout basis, with Mashall and SOS schools making it to the final. Zainab Khan from Mashall achieved the first hat-trick. "I hope one day I can join a regular cricket club," she said.

This was Zainab’s first participation in any out of school event. This feat with only five days of coaching speaks of the exceptional talent our girls possess. It showed that with a little bit of organised coaching, these girls can do wonders.

Here one would like to compliment Irsa Abbas, captain of the Special Girls team and her teammates, who put up a wonderful performance and showed excellent team work. Isra who also stood behind the stumps, was seen cheering up her team on nearly every ball.

The final lived up to its reputation of a thrilling match. For SOS Schools, Shabnam Ahsan top-scored with 79 runs, including three huge sixes. Shabnam, from Azad Kashmir, lost her parents in the 2005 earthquake and has been living in SOS for seven years. Her previous experience of cricket was playing in the village with her brothers. She won the player of the tournament award. She wants to make a name in cricket and is looking for an opportunity to join a girls cricket club.

Pakistan Sweet Homes fielded the youngest team, with Maria hardly seven years of age, but the girls were never behind in their enthusiasm and spirit to fight. The school team is very confident of putting up a better performance in future matches.

After the final there was an impressive ceremony. High Commissioner of Australia Margaret Adamson graced the occasion as the chief guest and alongwith Mr Aziz Boolani, CEO of Serena Hotels, gave away the prizes.

Aqsa Mehmood gave a fine speech using sign language, with her teacher interpreting the young girl’s expressions. She expressed the joy she and other girls had felt during the event and requested more such events.

Witnessing the very successful conduct of the event and the large support it generated, Australian High Commission and PCB have decided to make PCB-AHC Girls Cup an annual event.