Losing a way of life to climate change 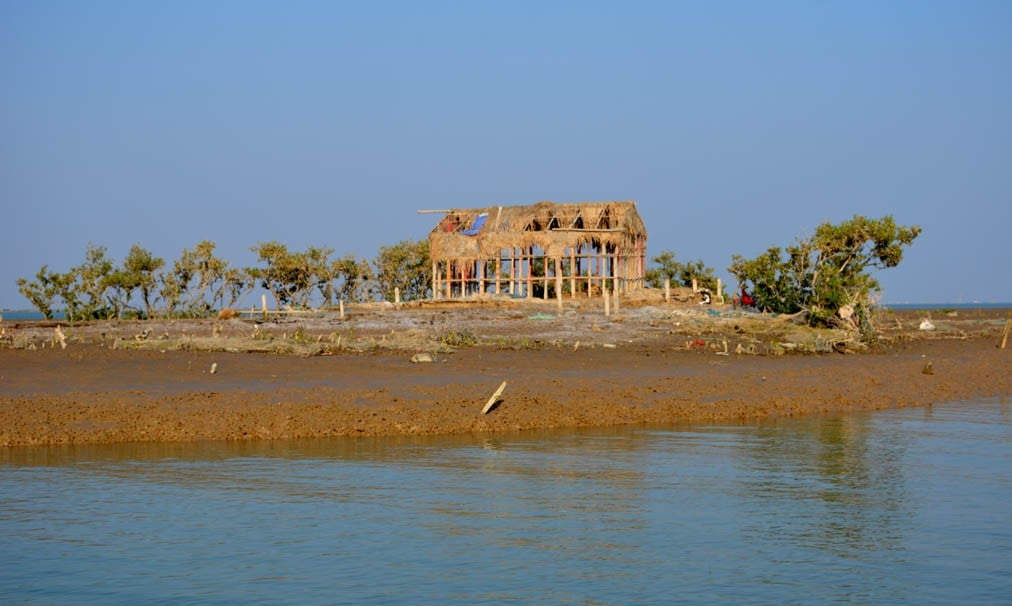 Tippan Island is one of the major Islands of River Indus Delta in Thatta district of Sindh. During the past few years, it has been nearly submerged by seawater.

Three makeshift huts surrounded by seawater from all sides can be seen while visiting the island. The only family living on the island has constructed a mud wall around the huts to keep seawater away.

Sukhaan Dablo, 30, who lives on the island with her five family members, says around 200 families were living on the island about 10 years ago but they migrated to Keti Bunder after their houses were submerged in seawater.

With 17 major creeks spread over 11,400 square miles or 29,526 square kilometres, the River Indus delta was once the sixth largest delta in the world. Rise in sea level as a result of climate change has almost destroyed this magnificent delta of the past.

The creeks were keeping the sea within its limits. Now seawater is flowing upstream and at some places it is flowing more than 100 kilometres upstream through these creeks. Recently, Senate’s Standing Committee on Science and Technology warned that the rising sea level will sink Karachi by 2060 along with other coastal areas of Sindh and Balochistan.

Before the sea level started rising, local communities were growing red rice, sugarcane, wheat and banana in the deltaic region known as Laar in Sindhi language.

Muhammad Ali Shah, chairman Pakistan FisherFolk Forum, tells TNS that due to rise in sea level, seawater has started flowing upstream. In the past 20 years, the sea has engulfed more than 3 million acres of fertile land. "Besides Tippan Island, there were so many islands in the Indus Delta that have now disappeared completely and around 700,000 to 800,000 people living in the deltaic region have migrated to other districts of Sindh," says Shah.

About 280 kilometres east of River Indus delta, Thar Desert is another region facing climate change. An arid region, Thar Desert is totally dependent on rain for life. It is facing severe drought for the past five years due to change in weather pattern. There has been either no rain or scattered rainfall in the past five years, causing starvation, killing more than 1,800 people, a majority of them being infants.

Besides Thar, Sindh’s other arid regions, like Achhro Thar or White Desert scattered along border with India in Sanghar district, Nara Desert in Khairpur district, Kachho and Kohistan in Dadu and Jamshoro districts have been facing severe drought for the past many years, but the mainstream media has not covered the conditions in these districts.

Due to severity of drought, rain-fed agriculture has suffered in these regions, causing communities to suffer malnutrition. Healthcare experts believe food scarcity will invite diseases in these regions. Another problem that communities of these regions face is that these regions are running out of indigenous seeds, as every year they sow seeds, hoping rain will bring new crop. But the dry spell destroys their seed stock.

Drought is also becoming a serious issue for Balochistan. Many districts in southern Balochistan are witnessing severe drought for the past four years. A large number of people have left their native towns and villages. According to an official of Provincial Disaster Management Authority (PDMA), Muhammad Younis, occurrence of dry spell and droughts is becoming common in Balochistan.

Younis says Balochistan saw its worst drought in 1997 that continued for more than six years. During that period, 29 out of 32 districts got affected. "Kohlu, Sherani, Punjgur, Chagai, Nushki, Kharan, Kech, Bolan, Gwadar, Washuk, Dera Bugti, Awaran and Jhal Magsi were the worst hit districts and around 2 million heads of livestock died of starvation," he says.

Dry spells are causing communities to suffer economic losses and face food shortage. Experts believe such phenomena have brought different diseases to these communities. Nutritionist Dr. Zahida Ali says it is not climate change that causes any disease directly but events related to global warming, such as droughts. "When drought occurs in a region, it causes lack of water and food and also kills livestock, which are the major sources of nutrition for the local communities. In the absence of nutrition, communities face malnourishment and they fall prey to diseases," she says, adding, cholera, tuberculosis and waterborne diseases spread as a result of climate change in countries like Pakistan.

Due to less than normal rainfall in Pakistan, arid regions are losing ground water. Since global warming has changed the weather pattern, surface water in the River Indus eco-region is also reducing.

A report titled, Food Security in the Context of Climate Change in Pakistan, published in Pakistan Journal of Commerce and Social Sciences, 2014 says that due to climate change related events, such as flooding and precipitation and high temperature, the yield of many crops has reduced. "Vegetables, particularly potatoes, are more vulnerable to heat. In Punjab, that contributes about 90 per cent to the country’s total production of potatoes, cultivation of potato crop was delayed by a month," states the report. Growers in central Punjab have witnessed a reduction in the yield of different crops -- up to ten per cent, says the report.

The eastern and western parts of the country are facing severe drought while the fertile region, located in the River Indus eco-region, has faced massive flooding since 2010. Floods in 2010, 2011, 2012 and 2015 destroyed many parts in almost all the four provinces.

Losing a way of life to climate change