The rising cost of Metro Train 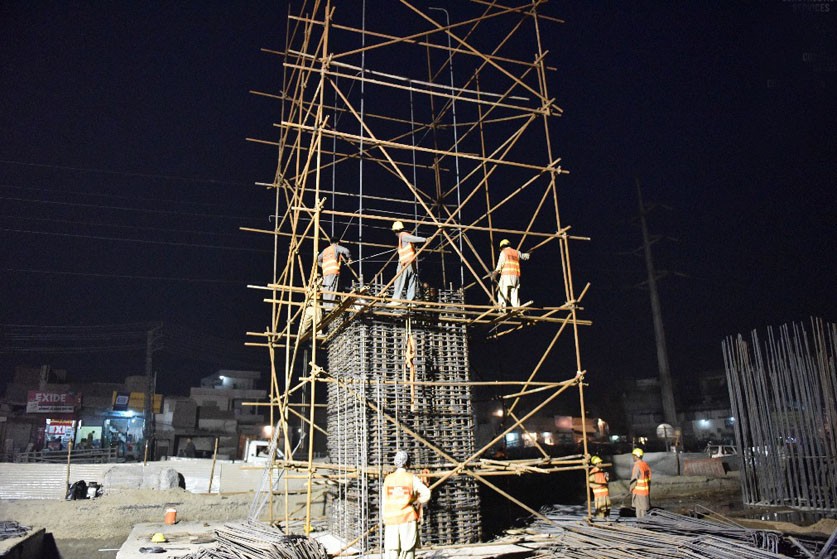 As the Orange Metro Train Project again made headlines this week with the death of seven labourers due to a wall collapse, questions are raised regarding the safety of workers as well as citizens who would travel along the 27.1-km route. Fourteen project-related deaths have already been documented in newspapers while the number doing the grapevine is double that.

Given that the life of a poor man is cheap in Pakistan because of an extremely weak labour rights movement, the discourse primarily concentrates on compensation rather than fixing responsibility.

But, as with most aspects of state governance, the Environmental Protection Law 1997 does cater for minimising such tragedies -- through its requirement of the Environment Impact Assessment (EIA) report at the time of project approval from the Environment Protection Agency (EPA). The EIA is meant to both assess the socio-economic and environmental impact of the project as well as devise an Environmental Management and Monitoring Plan (EMMP) to mitigate these impacts.

The law is evolved to the extent that it requires sharing of the EIA with citizens to get their feedback and answer queries through a public hearing process. Additionally, a committee which includes independent environment experts exists in the EPA to critically assess the EIA before approval, while the project executor is supposed to provide a monthly report regarding the EMMP to the EPA. To cut a long story short, elaborate mechanisms are in place to ensure minimal impact to communities and environment, as well safety for the project staff.

The omission of the impact on citizens was so blatant that even the cost of land acquisition or the shifting of services (electricity, gas, telephone, sewage) for construction was not part of the publicised project cost of Rs162 billion, and at least four new PC1s (a Planning Commission document detailing a development project with cost) were made months after the EIA approval which puts the Orange Metro Train Project cost at Rs190 billion.

Moreover, in the current situation of extreme loadshedding, no answer was given regarding where would the extra 74 MW electricity to run the trains come from.

Greater implications have come to the fore because of a lack of implementation of the EMMP. Other than the lack of safety precautions which has led to workers’ death, citizens of Lahore have had critical services discontinued for months -- the Shadman area had been without telephone for two months before it was fixed. There has been a 30 per cent increase in lungs and chest disease, according to a cursory survey of a few clinics in the area.

A more detailed survey of 125 shopkeepers (whose land may or may not be acquired) and hawkers was done along the 27-km route. Major roads such as Raiwind, Multan, McLeod, Nicolson and GT Roads, as well as the various sub-categories of food, retail and services businesses were covered. This was supplemented by surveying the number and types of shops in a 1-km distance at three different points along the route to be able to quantify the total business loss along the route.

My findings show a business loss of Rs21 billion in the last six months since the start of the project. But, this is a conservative number as the survey only includes ground floor street front shops ignoring markets as well as side streets, which are equally less accessible because of haphazard construction work.

The extent of business loss also differs between Multan Road which averages at 65 per cent, GT Road 50 per cent, and sections of McLeod Road up to 100 per cent because of the way construction is being done by enclosing the construction area. Apart from workers who have died or citizens whose land is being acquired, the rest fall in the category of collateral damage, for whom compensation is not even being contemplated, even though their rights have been trampled upon.

Thus, although the state has produced the needed paper work as required in the evolved policy and associated legal framework for environment, its quality is questionable as 85 per cent of the EIA report is ‘cut and paste’ from some earlier report, while the lack of policy implementation (EMMP) completely disregards the law in spirit.

Both speak volumes of a lack of professional ethics, an aspect yet to be discussed in our discourse of corruption.

The rising cost of Metro Train