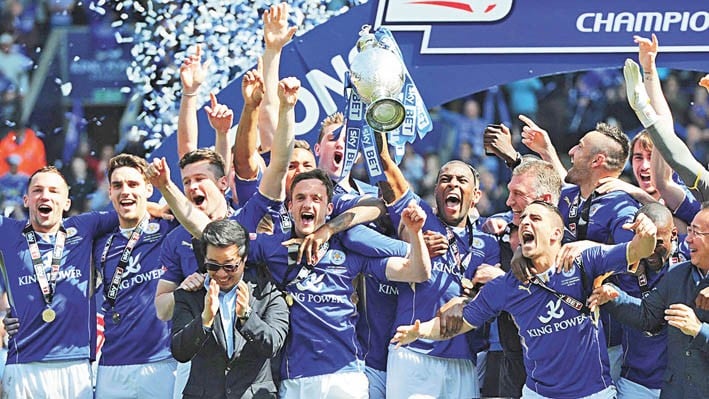 One of the most exhilarating seasons of the English Premier League concluded last Tuesday night, defying all the limits of predictability and writing an astounding chapter in modern football.

Leicester, a city known for the trade of shoes, hosiery and engineering equipment, wouldn’t have imagined even in dreams that its name would be chiselled on the EPL trophy as the new champion of England.

Capturing the crown with limited resources, Leicester’s triumph epitomised their passion and hankering for success.

It was a euphoric and adrenaline-pumping moment to see a side, dubbed as "underdogs" and "minnows" a year back, lifting their first-ever title.

In the last 21 years, the title had either gone to London or Manchester. Leicester’s feat underscores the prominence of their extraordinary endeavour for glory. A team whose starting line-up wasn’t worth more than 40 million pounds (Manchester City’s Kevin de Bruyne’s worth alone is £54 million) and whose players were regarded as cast-offs, confounded everyone with their team spirit.

Last season, Leicester staved off relegation to stay in the top flight. The odds were heavily stacked against them at the start of the new season and nobody would have fathomed that a team comprising no big guns would take a giant stride and stifle the hopes of traditional title contenders.

With Manchester United and Chelsea leaving their chances of top-four berths in tatters and eventually missing out on Champions League is a clear indication that the Premier League has been transformed and the order has been shifted.

Defending champions Chelsea, who finished their woeful season at ninth, started seeing their downward slide when the team’s most successful manager Jose Mourinho was shown the door for not just facing humiliating defeats but also losing the trust of his owners, players and staff.

The Dutchman Guss van Hiddink took over from him as the interim coach but it was too late for them to rebound and retain the title. Under his coaching, Chelsea did find a little redemption, but they will face a new test of restoring their lose pride when the new manager Antonio Conte, currently managing Italy, takes the charge next season.

Arsenal kicked off their campaign in style and were seen by many as the likeliest to clinch the title for a fourth time. But they squandered their chances by losing vital points. Though they secured the second position and sealed the Champions League spot, it was not the end Arsenal fans would have reckoned under manager Arsene Wenger who has succeeded in cementing his job despite going 12 years without an EPL title.

Manchester City also remained in contention for the championship for some time, but a decision-making gaffe scuppered their focus and hopes of a dream run when it was announced midway through the season that Pep Guardiola would assume the charge from Manuel Pellegrini next season.

Pellegrini who propelled City to a title feat in 2014 and also guided them to the Champions League semi-finals this year must have taken the decision of his axe as a stab in his back.

It is still a million-dollar question whether Guardiola, who has enjoyed immense success in Europe, will be able to steer City to new heights, keeping in view the competitive nature of EPL.

Manchester United have still not been able to resuscitate themselves post-Fergie era. The Dutchman Louis Van Gaal boasts a tremendous resume, but he has not been able to breathe vigour in his team. United are still the biggest club in England but frittering away the Champions League qualification sums up their despondent season.

Tottenham who lost their last match of the season miserably and dashed their chances of pipping their fierce rivals Arsenal for second position were another surprise package of the season. Mauricio Pocchetino, who hails from Argentina, has a great sight for discovering talent and he formed a lethal team of young and spirited players who challenged Leicester for the title.

The two new powers -- Leicester and Tottenham -- adopted a new tactic of "counter-attack" to down their opponents, despite keeping less possession in the games. The difference was Leicester succeeded in maintaining their composure throughout the season thanks to the panache of their "Tinkerman to Thinkerman" manager Claudio Ranieri. He inculcated a sense of pride in his team which reflected in the performances. Leicester were not the team who would run riot with goals. They had this unique ability to cope with any nuisance with their clinical displays, leaving their opponents shell-shocked. The precocious strikers Jamie Vardy and Riyad Mahrez were the linchpins of their success, who were backed by each and every player of the unit. Raneiri has his own never-heard-before way of motivating the players. He promised his team "free pizza" last season if they kept a clean sheet against West Ham to come out of the danger zone. He fulfilled his promise and Leicester went on to win the next 24 matches.

Totthenham striker Harry Kane and midfielder Dele Alli and West Ham midfielder Dimitri Payet were the other three players who stood out for their phenomenal contributions to their teams’ victories.

Manchester United striker Anthony Martial single-handedly scripted several wins for his team with his swashbuckling skills. He was signed from FC Monaco at the start of the season for a staggering £36 million and was labelled by many analysts as a "waste of money". But the Frenchman showed his class and proved his detractors wrong.

Leicester may not be able to emulate this incredible accomplishment for many years to come and the wealthy clubs will splurge on expensive players and stretch to every limit to reclaim the crown, but they have won over the hearts of every sport lover around the world. Their fairytale season will always be remembered as one of the greatest inspirational stories the world of sports has ever known.