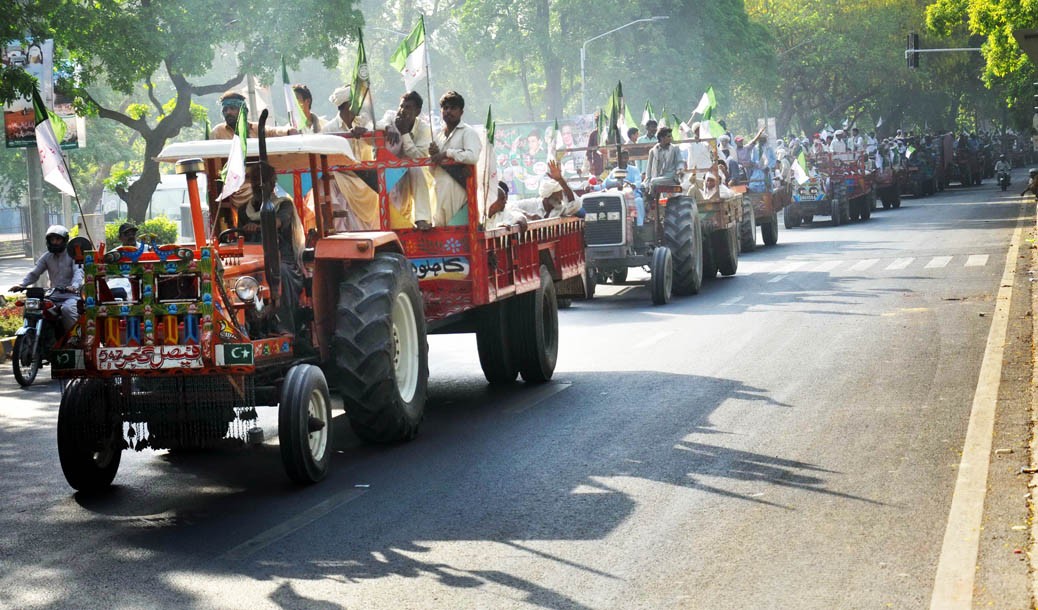 Pakistan has the misfortune of not having such parties in the political arena. None of the political parties that have sat in the parliament and assemblies over the past quarter century sent peasants, workers or poor people in sufficient numbers to these forums. This is a scandal for a country where 29.5 per cent people, almost one third of the total population, are living below the poverty line.

This statistic suggests that one third of the country lives in a state of political disenfranchisement today. Leaders and political parties that vociferously claim to be representing and fighting for the poor people seldom take the poor to the parliament or the elected offices. When I say poor, I refer to the people who cannot put food on the table, people who do not have a roof to cover their heads and people who do not even have the voice to articulate their demands and aspirations.

Notwithstanding their revolutionary and populist rhetoric, most of the mainstream political parties in Pakistan, like Imran Khan’s PTI, are dominated by the elite, the bourgeoisie and the petite bourgeoisie. Most of the country’s working people and the poor remain unrepresented and disenfranchised.

It is surprising to note that in a country where the International Financial Institutions (IFIs) backed elite have robbed, plundered and exploited the common citizens day after day, government after government, the leftists have failed to create effective platforms to resist and agitate against them.

Pakistan is a textbook case of a postcolonial kleptocracy where the elite plunder the masses with impunity. Through the first fifteen years of the 21st century, Pakistanis have been plundered by more or less the same group of rapine elite; first under the auspices of the West-sponsored sordid military dictatorship and then a travesty which passes for democracy in the neo-liberal dictionary of South Asia.

Pakistan’s role in the war on terrorism is another case of the failings of the Pakistani left. The single constant through the war on terrorism has been the decline of the quality of life for common Pakistanis who had to contend with fear and humiliation from both the Islamist terrorists and the state. Fifteen years down ‘war on terrorism’, Pakistan is a more radicalised, fractured and terrified society.

The chief beneficiary of this war has been the country’s organised crime that had a field day extending its clout and influence. Over the years, Pakistani state made compromises with the corrupt political elite to win their dubious and ineffective support in the war on terrorism.

The starting point of this compromise was the time when General Musharraf’s dictatorship embraced the same political actors who were wanted for crimes and against whom it had allegedly staged the 1999 putsch. The ultimate culmination of this Faustine bargain was the 2007 NRO through which wanted felons and white collar criminals were given a clean chit along with an invitation to rule the country again.

Musharraf had to make this settlement because he was no Messiah or revolutionary himself. True to the history of Pakistani dictators, he had, soon after his rise to power, became a member of the Pakistani rapine elite club.

That this all happened without any substantial resistance or protest from the Pakistani left in a country that has been home to socialists like Hassan Nasir, Sibte Hassan, JA Rahim, Mian Iftikhar-ud-Din and Dr. Mubashir Hassan, is a testimony to its collapse.

Disenfranchisement is the greatest political violation of the modern civilisation. It leads to vulnerability, exploitation and silencing of the weak. It is not surprising at all that Pakistan’s political discourse seldom touches the issues that matter most to the poor people of the country. For example, much of the sanitation system in the country is in a state of dysfunction. Travel to Karachi from Peshawar by train and the first sight that welcomes you at almost every train station is a huge heap of garbage, the biggest one at Karachi train station. Embarrassingly, public sanitation does not figure anywhere in the political discourse or on the manifesto of any of the mainstream political parties. Pakistani political discourse has ‘more interesting’ things to worry about -- Ayyan Ali, Altaf Bhai, Reham Khan and Panama Leaks.

Corruption of the elite should be scrutinised in the political sphere, but not to the exclusion of the needs and concerns of the poor and the working people. The political discourse should give as much space to the crusade against corruption as to the needs and aspirations of the multitude. The two are interdependent. Neglecting any one can adversely affect the other.

Given the weaknesses of the Pakistani left, it is not surprising to note that the space that belonged to them has been hijacked by ‘pseudo-revolutionaries’ like Imran Khan and his league of knaves and their naïve followers who have made a joke of the word revolution.

Right at the time when dozens of Pakistan’s poor peasants are locked in a bitter struggle in Okara, one sees Imran Khan and his PTI obsessively busy politicking over Panama Leaks. This is so because Panama Leaks scandal offers more opportunity for unsettling Imran Khan’s arch rival in Punjab than the Okara peasants’ issue. The hard fact remains that Imran Khan’s PTI, like all other rightist Pakistani political parties, is a conservative bourgeoisie party.

Empirical evidence suggests that real revolutions are brought by parties that are rooted in the poor and working people of a society. Only a party that has the ability to effectively connect with the Pakistani working people can bring substantial revolutionary changes in the society.

Decay of the political culture in Pakistan where it has been occupied by the elite, the bourgeoisie and the petite bourgeoisie can be attributed to a host of historic sociological factors; rise of neo-liberalism, domination of politics by money, commercialisation of education, religion and the media among many others.

The primary reason for this decadence, however, is the decline of the Pakistani leftist political parties. They had a tendency to look to the former Soviet Union or China for support instead of building local and national strategies for waging struggles. The perils of this tendency became apparent when the two patrons ceased to support Pakistani leftists at the end of the 1980s.

Labour makes the strongest component of any leftist political force. Peasants and agricultural workers have been the largest segment of Pakistani labour force historically. The leadership of Pakistani leftist groups came from the urban areas in many cases. The focus of their political struggle and organisational efforts remained the urban areas of the country where majority of the country’s labour force did not live. This was one reason the country’s establishment and elite rode roughshod over the Pakistani leftist parties whenever it suited their interests.

Late Khalid Bin Sayeed, a renowned Pakistani political economist and historian, pointed to the fact that when Zulfikar Ali Bhutto was ousted from power by a military strongman in July 1977, Pakistan’s peasants did not come out in droves to protest General Zia’s putsch. This was astonishing because Zulfikar Ali Bhutto had risen to power on a populist leftist slogan of "Roti, Kapra aur Makaan". A plausible explanation for this failure can be the fact that even Zulfikar Ali Bhutto’s Pakistan Peoples Party did not effectively harness the full potential of the Pakistani peasants and agricultural workers.

We are living in an age when the neo-liberal mantra of privatisation and free market capitalism is increasingly invading Pakistani society on one hand and an obscurantist ideology of religious zealotry and violence is eating into the social fabric on the other. This is happening against the backdrop of a steep decline of the welfare nets and services provided to the poor by the state. It is high time Pakistani leftists stepped in to confront these challenges of 21st century.