Dream within a dream 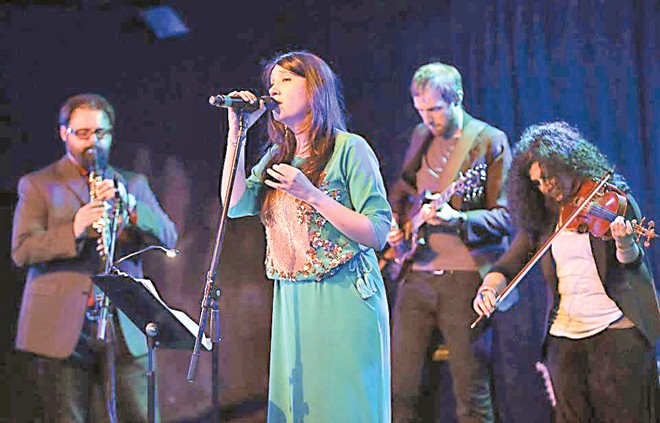 Sandaraa’s eponymous debut EP is a Brooklyn-based celebration of Central and South Asian mountain songs for the urban populations of the United States, Europe, and perhaps Pakistan, too.

Sandaraa is a multi-cultural folk-rock band aptly based in New York, a city known for its ability to bring together people and influences as diverse as those that make up this band. Maybe folk-jazz is a better name for the music that Sandaraa plays. That I have trouble deciding which to pick, and understand that neither is probably good enough, tells you a little bit about why their music is interesting. If you don’t really have the vocabulary to describe it, it must be something new. Which usually means it’s something worth learning to describe, and worth talking about.

The band’s name means song in Pashto, which lays out where the base melodies of their music come from. But to call this Pakistani music is to call Junoon sufi music, or the Beatles rock music. These statements have some truth, but really they don’t say much. And may hide much more.

Lahore’s connection to Sandaraa is that Zeb Bangash, of Zeb & Haniya, is the band’s lead singer. And the album is being released on Patari this week. But there is much more to this album than the culture of Pakistan. The rest of the band is made up of clarinetist Michael Winograd, violinist Eylem Basaldi, accordionist Patrick Farell, guitarist Yoshie Fruchter, bassist David Lizmi and percussionist Richie Barshay. The combined musical backgrounds of the band cover folk from Judaic, Eastern European, Turkish and Central Asian traditions. And the band’s members are well-versed practitioners of rock and jazz. The result is a jam band that explores how their own systems of culture, knowledge and practice meld together over the tunes of Pakistan’s mountain ranges, and beyond.

Ms Bangash leads the melodies as she sings old tunes from this region, but then each instrumentalist layers over it to create an overall sound that is very urban. It is urban in the sense that it represents a confluence of ideas that can only happen in cities.

The band describes their work as an exhibition of the "might of modal music". Modal music in Western musical tradition is roughly the equivalent of Indian Classical’s raags: a scale with some characteristic progressions or movements. To simplify, each of the songs Ms Bangash sings lies within a loose set of rules that define how a tune should progress. Each set of rules is a mode, or raag. In each song the instrumentalists explore the rules it operates in from their own traditions, resulting in a complex, layered sound where the whole adds up to more than the sum of its parts.

On top of the songs themselves, the recording is pristine, the production somewhat masterful. The album is smooth, but you can feel the tempo. The sound is densely layered, but you can hear the individual sentiment of each instrument.

In five songs there is grand diversity of emotion. The texture of the sound remains consistent throughout, and is perhaps what binds this together as a work, but each song presents a different mood. ‘Jegi Jegi Lailajan’  first invites you in with tempting mélange of celebration and questioning; then ‘Mana Nele’ begins to soul search; ‘Bibi Sanem Janem’ starts to find a beat, to create a picture, to long; ‘Dilbarake Nazinin’ then really embraces you, it is intimate and warm; and the real celebration of it all is ‘Haatera Taiyga’. Celebrations can take many forms, all are happy in the end, but some are raucous and garish, others are polite and polished. This album is neither extreme: it is not a college brawl, it is not a fancy dinner party. It is the geniality of a family Eid gathering.

Like a true Eid gathering, you want to be there, and not just have heard about it. Sandaraa it appears are very much a live band. It must mean much more to be in the same room with them as they feel out the commonality in their musical traditions. The whole point of this music is to see how musicians whose path may never have crossed if not for life’s chaotic coincidences, how music that may never have met on historical record, how audiences that may never have heard anything like this before, may connect with each other. And on these songs at least, it looks like everything does connect.

The band was in fact formed over the members’ collective love of old worn cassettes of Baluchi, Dari and Pashto music. On hearing ‘Haatera Taiyga’ they started dancing, and decided to pass on the feeling. The band is now performing in small venues across the United States alongside the release of the EP, and you know that people will be dancing. The band plans to tour Europe soon after, and one hopes that a coincidence of events like what put them together in the first place, may land them in Pakistan as well.

Dream within a dream