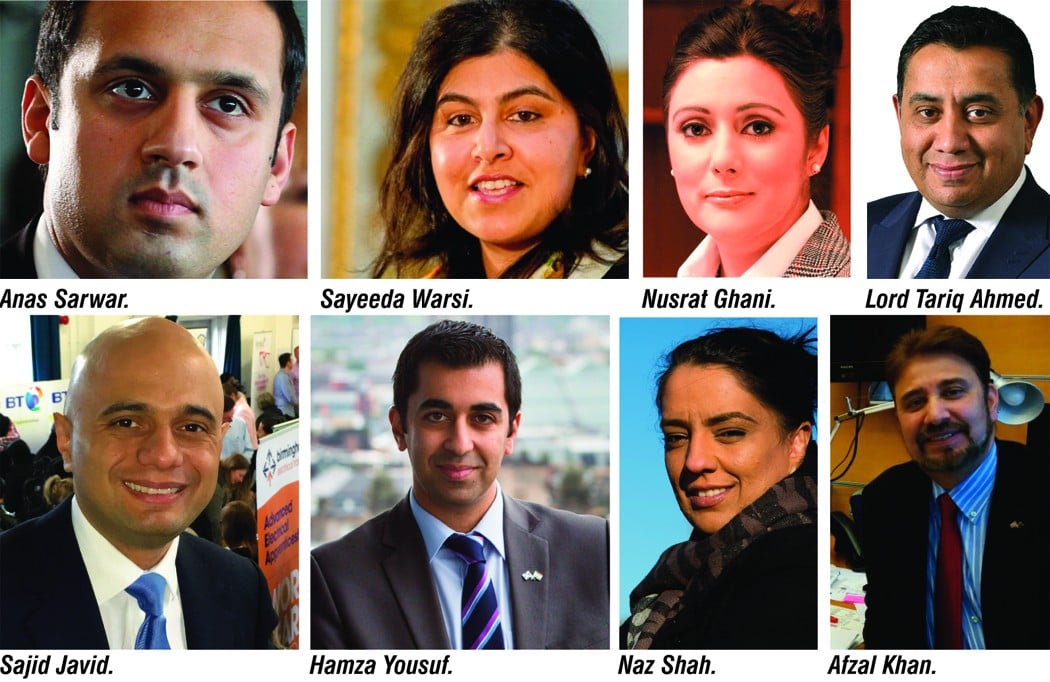 The victory of Sadiq Khan, a British Muslim of Pakistani origin, has been described as "historic" and no other word or adjective would quite effectively describe the scale and scope of this achievement.

Khan has been tipped as "the future prime minister of the UK most possibly" by political pundits. His election to the City Hall as the Mayor of London has captured the world’s attention.

It must be mentioned that Sadiq Khan not only got into the City Hall because he received votes from Muslims, Hindus, Christians, gays, lesbians, Jews, people of all and no faiths but because all these communities revolted against the baseless lies which had the hallmarks of racism and prejudice.

But Khan is not the first Pakistani who made it big in British politics. No doubt he is amongst a pioneering few but there are others who paved the way for a new generation of British politicians of Pakistani origin.

Baroness Sayeeda Warsi rose to political heights when she was made leader of the Tory Party as well as cabinet minister during the last government of Prime Minister David Cameron. She made headlines when she entered 10 Downing Street wearing a shalwar kameez to attend the first cabinet meeting. She quit her cabinet role but remains a member of the House of Lords and her opinion on issues of race, diversity, religion and conservative politics are featured regularly in the mainstream media. She is among the most influential British Muslim politicians. Warsi’s father was a bus driver when he came to the UK but he went on to set up a successful business. She tweeted to Sadiq Khan: "From this daughter of a Pakistani bus driver to a son of a Pakistani bus driver -- congratulations!"

PTI leader Muhammad Sarwar was the first British Muslim politician who entered the House of Commons from Glasgow and went on to contribute a great deal to the British politics. Sarwar faced great prejudice and remained under attack for several years by the right wing sections but it didn’t deter him from delivering. He retired from the British politics and his son Anas Sarwar was elected Labour MP for Westminster.

During the last general elections, when the Labour Party was routed from Scotland, Anas Sarwar lost to the Scottish National Party opponent. His loss was seen as a big loss not only to the British politics but also to Pakistan. But last week in a remarkable personal turnaround Anas Sarwar was elected as a Member of the Scottish Parliament (MSP) at a time when Labour lost and came third in Scotland, once its heartland.

Anas Sarwar is a young politician with a lot of potential and is seen as a rising star. He articulates his views well and has tight grip on the political affairs of the UK.

Sajid Javid, Conservative MP for Bromsgrove, is one of the most influential British Muslim politicians of Pakistani origin. He is considered close to Prime Minister Cameron and is one of the five most influential ministers. He is Britain’s Business Secretary and has also served as the Secretary of State for Culture, Media and Sport. On Sadiq Khan’s mayor victory, he famously tweeted: "From one son of a Pakistani bus driver to another, congratulations".

And as the congratulations from kids of bus drivers poured in, Scottish Pakistani parliamentarian for Glasgow Pollok, Hamza Yousuf tweeted: "From the grandson of a Pakistani bus driver let me also add my sincere congrats!"

Lord Nazir Ahmed was the first Muslim who entered the House of Lords and made history as the first Muslim peer. Lord Nazir Ahmed has been vocal on the issue of Kashmir and has been involved in many campaigns. He resigned from the Labour Party a few years ago after a controversy erupted about a report published in The Times in which he allegedly made anti-Semitic remarks but Lord Nazir has always denied that.

Lord Tariq Ahmed, Conservative Baron of Wimbledon, is Home Office Minister in the current government. He used to run a quiet but successful business to devote time to politics full time. He is a staunch supporter of human rights.

Lord Qurban Hussain is a Liberal Democrat peer from Luton. Lord Qurban is a strong advocate of Kashmiri right of self-determination.

Tasmina Ahmed-Sheikh won election for the Scottish National Party for Ochil and South Perthshire and now represents her party in the Westminster. She is a former Pakistani TV actor and her husband has been involved in the production of many television dramas. The couple met in Glasgow as both were singers in a rock group.

Rehman Chishti, Conservative MP for Gillingham and Rainham, is a Tory MP. He served as Benazir Bhutto’s advisor and is close to the children of Benazir Bhutto.

Nusrat Ghani, Conservative MP for Wealden, is of Pakistani descent who was elected last year from a heavily English area. She doesn’t take any interest in the affairs of the Pakistani community and not many in the community know her.

Imran Hussain, Labour MP for Bradford East, is Shadow Minister of State for International Development. He lost election to George Galloway in Bradford but registered a landslide win in 2013. He represents a large Pakistani-Kashmiri community of Bradford. He is originally from Mirpur.

Naz Shah, MP from Bradford, made history when she defeated George Galloway. She has been known for her vocal views and her rise to the parliament was hailed as how the Labour Party has penetrated deep inside ethnic communities. She was made a part of the powerful home affairs select committee but had to step down two weeks ago as anti-semitism row erupted. She insists she shared anti-Israel posts by mistake.

Khalid Mahmood, Labour MP for Birmingham Perry Barr, has been in the parliament for over a decade. He has served on Britain’s all parties counter terrorism committee. When Pervez Musharraf started life in exile in London, Khalid Mahmood advocated his cause and arranged gatherings for him.

Shabana Mahmood, Labour MP for Birmingham Ladywood, is Shadow Cabinet Minister. Her parents hail from Mirpur in Azad Kashmir. She is seen as a frontline leader in the Labour ranks.

Yasmin Qureshi, Labour MP for Bolton South East, is a barrister by profession. She routinely speaks against Indian occupation of Kashmir and has never shied away from airing controversial views.

Baroness Kishwer Falkner is a lead Liberal Democrat Spokesperson for Foreign Affairs in the House of Lords.

Baroness Nosheena Mobarik is a Conservative baroness from Scotland. She was the vice chairperson of Confederation of British Industry (CBI) for two years (2013-2014). She has worked hard to promote business in Pakistan.