Suno!, Hamza Bangash’s play staged in collaboration with Taskeen, addressed social issues related to mental illness and how we, as a society, need to educate ourselves to deal with it effectively. 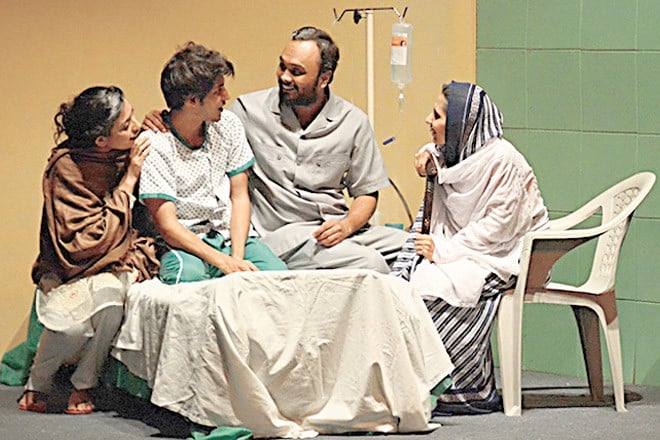 It’s unfortunate that while we boast of changing times in the 21st century with sheer pride, when it comes to mental illness, we are still holding on to early 19th century practices where mentally-challenged patients were literally shocked into coma - with their nerves severed and their eye sockets hammered into with nail-like structures. The pain then was physical, the pain now is emotional but they are both devastating in equal measure.

Taking a step towards bringing mental health out of the shadows by dispelling taboos is Taskeen - a mental health and emotional well-being awareness initiative being led by individuals who have been, directly or indirectly, affected by mental illness; Taskeen has been found under the umbrella of the Pakistan Association of Mental Health and Care for Health. Last week the organization joined hands with director Hamza Bangash of Baraf Paani fame to stage a play, Suno!, based on the real-life struggles of one of Taskeen’s volunteers, who suffers from bipolar disorder.

Suno! is essentially about a struggling family with day to day issues no less than your average middle-class family but ones that penetrate deeper into their psychological and emotional framework and extend beyond the daily rigmarole of life. The play takes off from the aftermath of the loss of Rizvi family’s patriarch, Asghar Rizvi and quickly puts the spotlight on his grandson, a budding yet conflicted teenager Gulzar Rizvi (Hadi Bin Arshad).

It’s easy to assume that Gulzar is just another hormone-fuelled, rebellious teenager at first glance, but another look at him and one realizes that he is a troubled teenager, not a troubling one. He shows all the signs of a developing mental illness - restlessness and isolation, distancing from loved ones and having suicidal tendencies - and fails every time to explain how he feels. Through a series of emotionally-charged interactions that hinge on the fear of acceptance, coupled with the unraveling of secrets that need not be hidden, the play gives a lesson on how to overcome social stigma surrounding mental illness and give due care to the sufferer. Densely written, enthrallingly simple and morbidly funny, Suno! perfectly blends in a dialogue on society’s unjust treatment of the mentally-challenged with the irony of it all. The performers, particularly Arshad and Hammad Siddiq (who plays Gulzar’s father Sohail Rizvi), are brilliant and subtle in the depiction of their characters and thankfully do not stoop to gross generalizations or typically exaggerated interpretations of them. On the whole, as Alizeh Valjee, founding member of Taskeen, puts it, "As a society we are plagued by the worry of ‘what will people say?’ and the irony is we end up harming ourselves and our own families as a result. Suno! addresses that and more."

Suno!, however, hasn’t grabbed our attention simply because it’s a deeply empathetic play speaking about mental illness amidst a plethora of commercial theatre. But because the initiative is using performance art as a tool, at large, to battle the stigma and discrimination surrounding mental illness and is creating awareness in order to avoid further tragedy. Theatre, music, drama make for some of the most pervasive mediums in society - ones that we easily relate to and find parts of ourselves within. These not only hold up the mirror to society but can also be therapeutic.

"Changing social perceptions and behaviour with one theatre play is a difficult and unrealistic task," founding member Taha Sabri reflected on the choice of performance art to speak up on an issue like mental illness. "But what we hoped to achieve through this event was to start a dialogue around mental health and shed some light on the problems that people with mental heath problems (and their families) face due to the misconceptions about mental illness and the resultant stigma. Theatre and film are great mediums for spreading such awareness since it allows one to give a message in a subtle and appealing manner without sounding too dull, dry or preachy and still make an impact."

We couldn’t agree more. Initiatives like Suno!, or the Care for Health concert held earlier this year, offer much-needed mental stimulation in an environment overwhelmingly obsessed with commercial entertainment. More importantly, they not only make
audiences reflect on unnecessary taboos but may also hit home to those who are unable to explain their anxieties and depression by showing the issues as physically real to a significant number of people.

Research proves that the entertainment world is hiding more than what it’s expressing. Suicides amongst celebrities are as common as in general public with mental disorders leading the cause. The young crop of artists, however, have become increasingly outspoken and open about their mental illnesses - from Lena Dunham to Deepika Padukone - and that has only helped others associate with them and draw inspiration from their recovery. It would be naïve to assume that Pakistani artists don’t go through the same. There may be many a musician, actor or artist who are hiding from mental realities simply because it’s taken as a sign of weakness. Coming out through such platforms will not only lend support to others but will also serve as an outlet for expression that may otherwise be suppressed.

"The best way to reduce stigma against mental health problems in our society is for people (especially celebrities) who have overcome these problems to come out and say that look we had these problems, we took professional help and now we are much better. If any Pakistani celebrity can do this then that would really help the cause," Sabri added.

Singer Sara Haider, who collaborated with Care for Health in February for a live concert, is of the same view. "If I sing a song and then talk to you about mental health, you are more likely to take notice and pay attention. It’s as simple as that. Our society doesn’t allow for us to talk about anything difficult or uncomfortable. I don’t know if I can make a change, but I can try," she said speaking to Instep on the topic.

It’s been said earlier and there is no harm in saying it again. The entertainment world has a significant influence on society and for that reason alone it has the responsibility to start conversations, conversations on difficult topics that offer food for thought; for change and for betterment. When you share a story with a group of people, it paves way for common, shared understanding. Similarly if a play or drama talks about breaking down the social barriers of mental health, people will respond more, collectively. This calls for our support.