PTI’s time to move on

Despite many miscalculations, the party, under the aggressive leadership of Imran Khan, has persevered 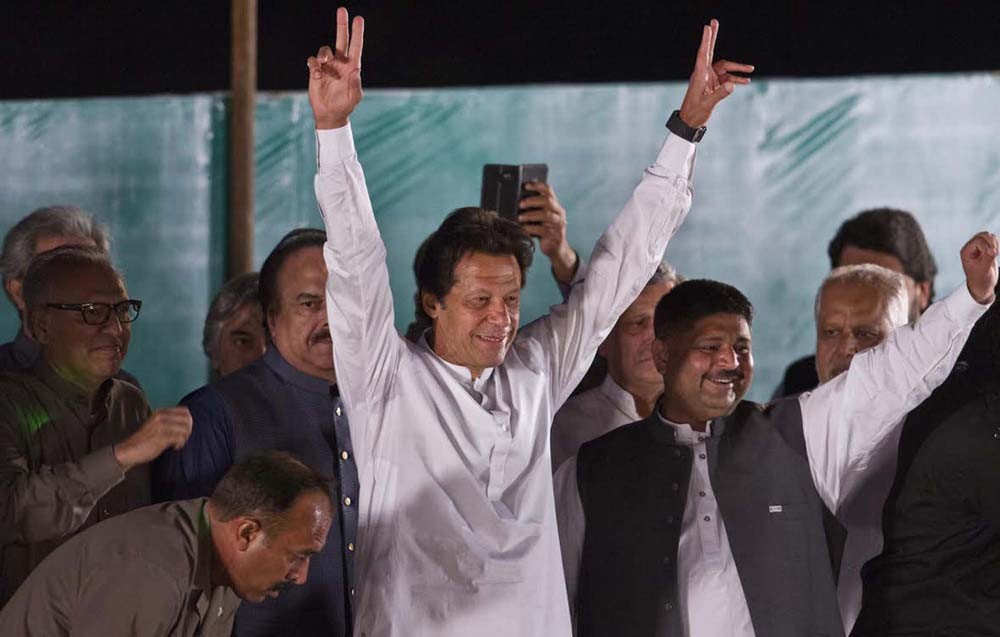 At 20, the Pakistan Tehreek-e-Insaf (PTI) is still a young party with the youth forming its core and defining its character.

Its founder Imran Khan has obviously grown older since launching the PTI on April 25, 1996 a year after marrying Jemima Goldsmith. Though he doesn’t seem to have slowed down, he has definitely become prone to missteps.

Despite his age, he is young at heart. The fast bowler in him continues to be aggressive in his actions and fiery in his language.

The young PTI members and supporters provide the party its vitality. They are feared both in the street and on the internet. One can easily draw their ire by criticising the party and its leadership. They often hunt in a pack and push the limits. Taking on the more intolerant lot among them could turn out to be a nightmare.

Imran Khan has taught his followers never to give up. He was once the determined captain of the Pakistan cricket team and is now the indefatigable kaptan of a political party. Many believe he is running the PTI the way he was leading the cricket team -- singlehandedly with a self-centred approach. The PTI minus Imran Khan is close to nothing. Most voters think on those lines and the huge number of votes the PTI got in the May 2013 general election were largely due to the charismatic cricketer-turned-politician with bat as the election symbol of the party.

One must give credit to Imran Khan for his perseverance. Even in the face of heavy odds and continuous failure at the elections, he persisted with his message of change in the hope of realising his dream one day. Electable politicians joined and left him after coming to the conclusion that he is unlikely to come into power. Many more have been joining him in recent years as his political stock kept rising, but this stampede of lateral entrants into the PTI introduced groupings in the party and affected its discipline. This exacerbated the tussle between the old and new PTI members. Some of the ideological activists of the PTI even started referring to their party as the PTI-Q as many leading lights of the once ruling PML-Q, created by General Pervez Musharraf to serve his political ambition, have since joined Imran Khan’s party.

Then something unbelievable happened on October 30, 2011 when the crowds flocked to the vast and historic Minar-i-Pakistan ground in Lahore where the Pakistan resolution was adopted in 1940 as Imran Khan embarked on a spirited journey leading the revitalised PTI. It was at this huge public meeting that Imran Khan uttered words like ‘change’ and ‘Naya Pakistan’ to inspire his supporters. His use of the word ‘tsunami’ also gained currency at the rally to describe the flood of people who were going to drown the ruling elite in Islamabad and Lahore. It was also at the Minar-i-Pakistan public meeting that Imran Khan declared war against corruption and demanded return of money stashed away abroad by Pakistani politicians and others.

The PTI and Imran Khan came of age after spending about 15 years in the wilderness. In the intervening period, the party contested and lost elections. In fact, its percentage of votes kept falling in the polls. It got just 1.7 per cent of the total votes in the 1997 general election despite the media hype and the sense of anticipation fuelled by Imran Khan’s hectic election campaign. The PTI’s share of votes slumped to 0.7 per cent only in 2002. It boycotted the 2008 polls along with a few other political parties though it could not have performed any better than the previous elections. It was an unwise decision as election boycotts have never really worked in Pakistan.

The 2013 general election finally brought some good news for Imran Khan as the PTI obtained around 7.8 million votes to emerge as the second biggest party in Pakistan after the Pakistan Muslim League-Nawaz (PML-N). Since then, Imran Khan has been acting as the prime minister-in-waiting and criticising Prime Minister Nawaz Sharif almost on a daily basis. There is no doubt he has put the Prime Minister on the defensive and kept him on edge, but critics insist Imran Khan is in undue hurry to oust Nawaz Sharif and take his place. Many also question his suitability for the job as they believe he is an emotional man with an aggressive style fit for leading an agitation as an opposition leader but unfit to run the country with the calmness and astuteness needed for the job. However, only time will tell if he can adjust himself to the requirements of the prime minister’s office. He is untried and therefore deserving of a chance.

To its credit, the PTI has established some good precedents. It has held intra-party elections once and could have organised the second such polls had there been no Panama Papers leaks that Imran Khan saw as a God-given opportunity to force Nawaz Sharif to resign. There were many shortcomings in the PTI’s intra-party polls as attested by its election commissioners because votes were bought and results were manipulated, but a sincere effort was made to democratise the party. Unlike most other parties, there is no dynastic politics in the PTI as far as Imran Khan is concerned, but he has been unable to prevent some of his party leaders from promoting their kith and kin by securing PTI tickets for them to contest the assembly and local government polls.

Also, the PTI has shown its capability to mobilise its workers and supporters for a cause at fairly short notice. It has highlighted issues and brought into focus matters that are neglected.

By establishing the Shaukat Khanum Memorial Cancer Hospital in Lahore in 1994 in memory of his mother followed by a similar hospital recently in Peshawar, Imran Khan showed not only his humanitarian side but also his ability to raise unprecedented donations for a good cause. This proved that donors trusted him with their money. Of late, voters too have started trusting him with their votes after having shunned him in previous elections.

Imran Khan also did philanthropic work in the field of education. He set up the Namal College in his native Mianwali district to create educational opportunities for students in an under-developed part of Pakistan. In fact, his social and philanthropic work has been quite impressive and many people wished he had focused more on it instead of joining politics. Imran Khan had little love for politicians as he believed they were self-serving and corrupt. However, he too entered politics due to the realisation that one needed to come into power to set things rights and herald a change.

Imran Khan erred by backing the sham referendum that General Pervez Musharraf held to prolong his rule. It was a miscalculation and an undemocratic move that Imran Khan eventually regretted and apologised for. Another miscalculation was his decision to hold the ‘dharna’ on the Constitution Avenue in Islamabad for 126 days in 2014 to highlight the alleged rigging in the 2013 general election. The judicial commission set up by the Nawaz Sharif government on his demand to probe his allegations gave a verdict against him. He couldn’t force the Prime Minister to resign and his move to put pressure on the government by asking the PTI lawmakers to quit also didn’t work. In the end, the PTI assembly members returned to the same assemblies that Imran Khan had condemned time and again.

The kind of tough language that Imran Khan has been using to run down his political opponents left much to be desired. He also made a mistake by asking the citizens not to pay taxes. This was something impractical and would have harmed the state rather than the Nawaz Sharif government in case the tax-payers had responded positively to his call.

There has been one error after another by the PTI head. He has focused too much and too long on the alleged rigging in the last general election. Three years have passed since the polls were held and it is time to move on and prepare for the next election. The electorate is keenly watching the performance of the PTI-led coalition government in Khyber Pakhtunkhwa and the voters would keep this in mind while casting votes in the 2018 general election. The voters in Khyber Pakhtunkhwa are known for making their rulers accountable and throwing them out of power in every election as they did in 2002, 2008 and 2013. The PTI too would be shown the door if it doesn’t deliver in the remaining two years of its rule in the province.

It is obvious the PTI has fared poorly in past elections in Balochistan and except Karachi its electoral performance in Sindh was no better. It would have to work really hard to obtain the same number of votes it polled in Khyber Pakhtunkhwa in 2013. And winning Punjab is a must for every party, including the PTI, if it wants to rule Pakistan. For that to happen, the PTI needs to beat the PML-N in its Punjab stronghold. It is understandable that Imran Khan is trying to do just that by targetting the Sharif brothers. The Panama Papers leaks has handed him another opportunity to bring down Nawaz Sharif. He is unlikely to get support from other parties to accomplish this mission and managing such a coup alone appears an uphill task. Also, Imran Khan would have to keep a watch on the working of his own party due to the deep-seated divisions in its ranks.

PTI’s time to move on