Ali Saleem’s new avatar is Shola Jaan, a respected eunuch in the harems of Mor Mahal. 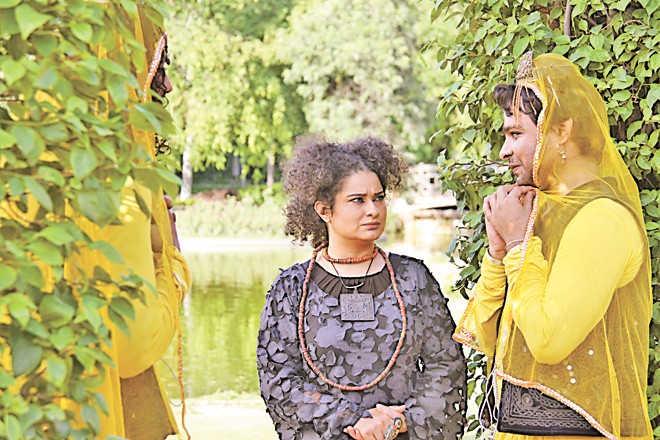 Ali Saleem likes to shake things up. "I like challenging stereotypes," says the man himself.  From imitating Benazir Bhutto to donning the avatar of Begum Nawazish Ali, he has done it all. Therefore, we aren’t surprised to see him play the character of Shola Jaan in the upcoming TV serial, Mor Mahal. And Shola Jaan is a bold step for Pakistani television because when was the last time we saw the transgendered community get any respectful representation on our TV screens?

"I play the character of a royal eunuch who is everybody’s favourite." Since the TV serial is based on an ancient, pre-industrialization period, Shola Jaan is a eunuch who lives inside the palace and looks after the concubines of the king. One wonders how much sensitivity the TV serial will give to his character. "It is an empowering character to play because Shola Jaan is loved by everyone and is quite influential. She isn’t subjected to discrimination or hate, because eunuchs at that time were much loved and revered." While in terms of hierarchy, she isn’t a decision-maker, Shola Jaan does have the power to influence major decisions, and as Saleem teases us with a little glimpse into the future, she plays a pivotal role in helping young lovers.

Ali Saleem adds that this is the first time he has seen so much work go in to helping actors prepare for their characters, with mandatory workshops and dialect training, but he sheds light on one extremely important thing that Mor Mahal is doing in their inclusion of a character like Shola Jaan.

"What was extremely heartwarming for us to see is that there was a cast of nearly 40 to 50 khwaja sara’s who were part of the cast and were working as junior artists." The transgender community of Pakistan, unfortunately, is subjected to much discrimination and derogation. However, in Mor Mahal there were employment opportunities created for the transgendered community. "It was amazing to see them included in this mega project."

Saleem also describes the atmosphere of the set: "There were so many khwaja-saras, young girls and boys and everyone gave each other equal respect! Everyone was comfortably mingling with each other. It was really such a positive environment." While not many other TV productions can claim to encourage and support minorities, with some TV channels who actively mock and ridicule this marginalized section of our population, Saleem says what other channels do is their business but he hopes that one day they will realize not to make fun of them. "They were such wonderful people to work with. Call up anyone who was on set and they’ll tell you the same."

It’s not the media, but our society that also cannot tolerate transgendered individuals or any similar thought in Pakistan. "When I used to imitate Mohtarma Benazir Bhutto, there would be protests happening outside the studio, with people taking offence to the fact that I was imitating her. Benazir sahiba herself used to be so encouraging and absolutely loved my performance, but her party workers would be so offended with what I was doing."

But Saleem enjoys having such an effect on society. He is quick to mention that our society has become one where killers like Mumtaz Qadri are considered heroes and where many social ills are celebrated. "Working on Mor Mahal has made me realize that we were so much more cultured nearly a 100 years ago. We were better human beings. At that time, a eunuch was a respected member of the society. Today, they are marginalized."

Saleem is hopeful that things can change and he is delighted that Mor Mahal is working on changing perceptions as the upcoming TV serial is reviving older values and traditions, depicting a society that was much more tolerant and respectful than the one we live in today.