At Canvas Gallery, Karachi, Abdullah Qureshi’s striking abstract paintings are being seen as a change of direction in his work 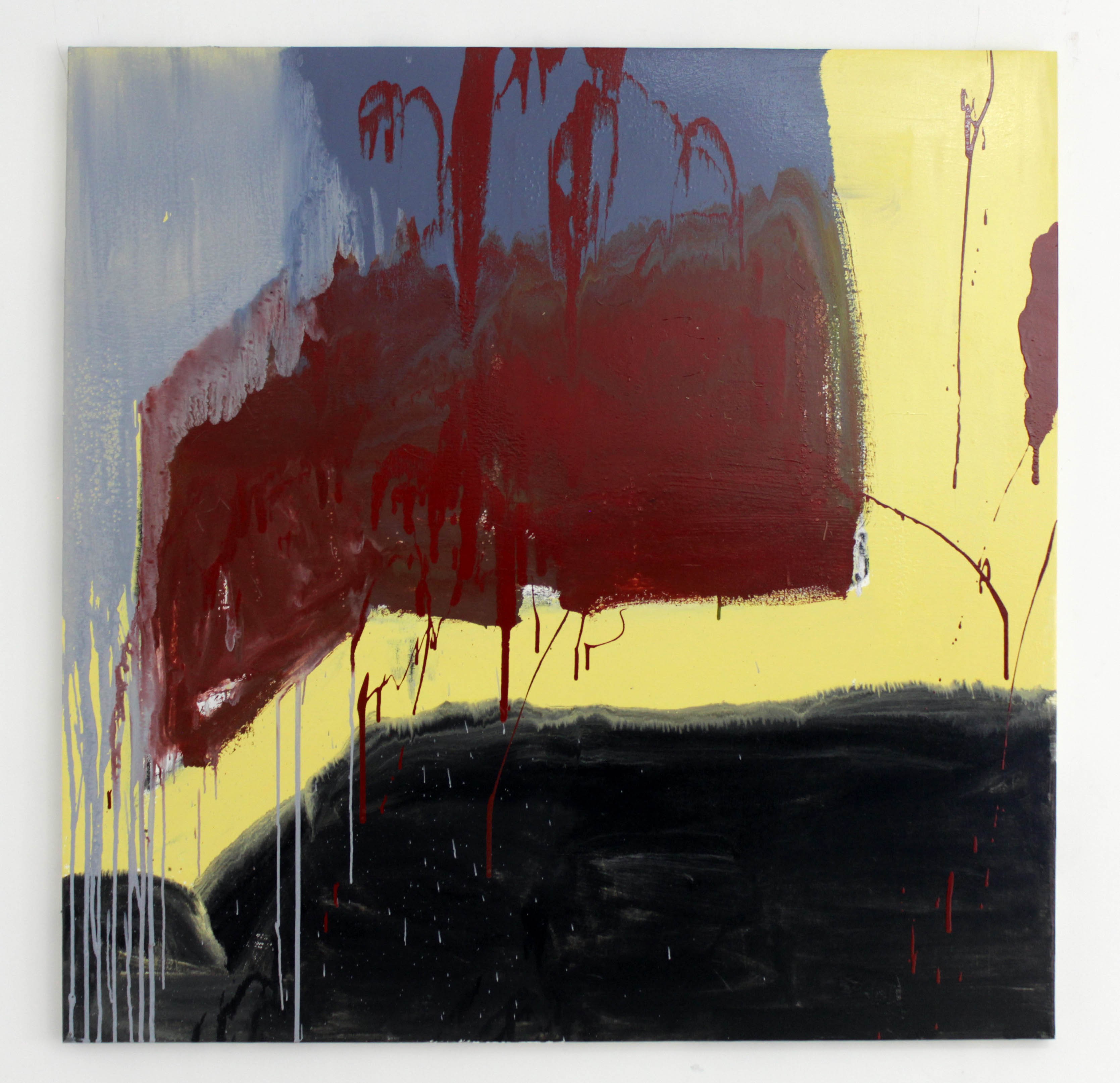 One has -- on its left-- a beautiful pale blue section that slides down slow, on a field of black. In between the picture plane, a pale yellow band dances around a pool of burgundy red and its remnants, streaks of thin paint, bleed all over the canvas.

Another starts off in a black opening and drops into a pink crater, which holds what could be almost a square. The pink crater, not wanting to be left behind, reveals what appear to be scars.

Abdullah Qureshi’s canvases are almost always large. The tallest in this show is about eight feet. This kind of scale is of course not without precedent; many abstract painters have been drawn to it. The impact, to put it crudely, is that one steps back for scale to have effect on the retina; that if the picture is true, the eye will sing over its large expanses of colour; that its power is derived by distance, by awe.

Qureshi, however, is peculiar. His paintings draw one closer rather than pushing one back -- they seem to ask for intimacy, not submission.

The influential teacher and painter, David Bomberg thought that the eye -- in itself -- was a dumb object. His belief was that seeing only really begins when one involves the feeling of touch and other senses. That one starts truly making a picture -- a sense of mass on a flat surface -- simply because one has felt it.

What Qureshi feels, placing images and colour beside each other in such a way as to suggest previously unnoticed or un-imagined relationships -- or any other painter for that matter -- is studying subjectivity as breaking point. What seems definite though is that Qureshi’s paintings invite multiple, contradictory readings.

These contradictions -- if the pictures are any good -- almost always work in parts.

What gets totally lost in reproduction is Qureshi’s use of colour and more importantly his work’s texture. It cannot be argued enough that Qureshi is not only a superb colourist, but also one who polarises its usage .While one could say he favours slabs of black, red and white, seeing the paintings in person one realises that the colours’ tonal gradation is extremely subtle. The feeling is like opening one’s eyes in a dark room and slowly registering the objects in it.

Qureshi, since he began to paint, has never titled his work. Titles are tricky. They fundamentally indicate recognition

And while things are at a first glance, subtle and even still, what excites the eye the most is the way one colour encircles the other, that it leaks and drips, that slower viewing reveals Qureshi’s colour to ring in one’s eyes, for it reverberates.

To say more about the way Qureshi applies paint on canvas, how it feels on a canvas would be to appear silly, so here is less. He uses enamel, its characteristics of being quite liquid yet having substantial body and drying up quickly suits the way he shapes a picture. The most important part -- and I know no Pakistani painter except Qureshi who understands this -- is that enamel can shine and that it can appear to be wet (there are two or three pictures that do not shine and they seem flat compared to the others). These elements are what really tie up the work together: the feeling that they seem to be freshly painted, that they are wet create illusions; that they have been created or revealed just as we look at them; the feeling of birth and rebirth, the shine in part creating sexual tension -- a metaphor if you will -- for sweating bodies in dark rooms.

And while there has been talk of this new collection as a sign of a change of direction in Qureshi’s work -- mostly that it has become more joyful, his previous major work being dominated by large pitch-black holes in the center of canvases, my eye does not fully believe this. The discrepancy being that while drips have been an important part of Qureshi’s work, the most striking pictures in this show have the drips running in reverse like it is raining -- only upside down.

Another contradiction is that Qureshi, since he began to paint, has never titled his work. Titles are tricky. They fundamentally indicate recognition -- a picture titled "a chair," even painted in abstraction in its extreme will trigger off an association, a quicker entry point. Another reason is that the painter’s natural mode of communication is making a picture, not writing an essay; many, therefore, are not very good at it. The last and most significant -- at least in my mind -- is that a painter wants the viewer to be removed from the painted object; that the viewer and it do not reside on the same plane but different ones.

Looking at Qureshi’s new works, and the ones preceding it, none of the above observations really pin down this problem, except the fact of entry. Instead of describing objects -- even ones that are abstract by nature -- Qureshi does not seem to be removing hints of figurative interpretation, of being, at least in part, in this world. Even though, almost all of Qureshi’s work is figure over ground, it’s devoid of any "naturalistic’ three-dimensional rendering of space (my childish eye traces out remnants of buildings, bats, and bits of landscape). But, his method of not titling work is working in reverse in the sense that the viewer’s arrival in the picture’s space is hindered and slow.