Although the issues of women in Pakistan’s conflict zones have been highlighted many times, the resolve and sensitivity needed to tackle these is still lacking 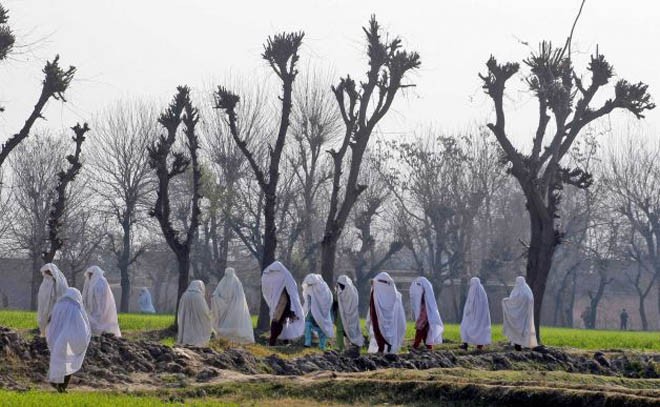 Militarisation has always been considered a quid pro quo response to insurgencies and conflicts all over the world - more so by the governments of developing countries. Pakistan is no exception. Rather, it has always been pushed into this phenomenon embroiled in religious, ethnic, and sectarian conflicts.

Some parts of Pakistan have always been militarised, both in terms of institutional militarisation as well as private rebellious/extremist armies, but not to the extent of having a state within a state.  However, post- 9/11, the country willingly or unwillingly adopted the doctrine of a pre-emptive war on terror, resulting in a sharp increase in the militarisation of society. Khyber Pakhtunkhwa (KP) in general and Fata in particular became the hotbed of extremism, consequently getting massively militarised in the process.

In KP and Fata alone, millions of people were displaced due to insurgency and counter-insurgency operations. Of these, a large number consists of women and children. These women struggled with many issues, ranging from cultural exclusion to economic, social and medical problems and even -- sexual harassment.

When the Pakistani military was battling the extremists to reclaim Swat and other apparently lost territories in Fata, many factories and small industries were closed down. That rendered hundreds of men unemployed and put extra pressure on the womenfolk to look for ways and means to survive and feed their families. On top of it, the closure of the cosmetics and silk factories in Swat resulted in a lot of women losing their jobs.

She says her 12 women colleagues at the cosmetics factory also lost jobs and now hardly earn anything from embroidery work at home.

The family of a nomad, Zaitoon Bibi, that was entirely dependent on her selling cloth door-to-door, nearly starved to death when she was warned by militants against roaming in the streets without a mehram.

"I used to buy cloth from the local market and sell it on installments to women in nearby villages.  However, after the warning to the shopkeepers by militants, they have stopped selling anything to us single women anymore", she says.

The absence of women in peace negotiations or conflict resolutions is another key factor in the failure of addressing women issues properly in militarised zones.

Though many areas including Swat are comparatively peaceful now and a few factories have been reopened yet the women are missing from the workforce. According to analysts, women are still going through the aftereffects.

Tabassum Adnan, the founder of first-ever women jirga in the history of Pakistan, laments that a blind eye has been turned towards the post-operation, post-conflict situation. "Many women are forced into beggary for survival for the simple reason that many of them have lost male members of the family during the operations or militancy. Whether they were guilty or not, the space created by their death is taking toll on these women."

Shamama Arbab, member Provincial Commission for the Status of Women and former president of the Women Chamber of Commerce and Industry Peshawar, feels women entrepreneurs are also affected by the situation not only psychologically but also at the policy level.

"With the prevailing conditions and lack of vision among the policy makers, the economic input by the 50 per cent of the population - women - is not only diminishing but it is being killed altogether," she says.

Another aspect often ignored while assessing the impact on women trapped in militarised zones is the misuse of the situation, not only by the stakeholders in the militarisation process but by their own family members as well is trafficking of women. During the mass internal migration in these areas of KP and Fata both by military and militants, there were many cases of trafficking of women but these are not always reported in the national press and electronic media because the topic is a national taboo.

Speaking about the problem, Tabassum Adnan says, "We do not have the final estimate of the women affected by terrorism, conflict, and natural calamities. They are in large numbers and a lot of trafficking cases have come to fore. However, there are only a few women who are willing to speak to media. There are many more who don’t want to -- due to the shame linked to women trafficking".

Narrating one such case and efforts of her organisation to stop women trafficking, Tabbasum adds, "I went to Tootano Banda (Swat) at 10pm and rescued the girl and sent her to Darul Aman. She was being sold to someone in Punjab by her family because her husband had joined the Taliban cadre and there was no clue of his life or whereabouts. Her brothers and father had obtained a one-sided decree from the local cleric to sell her."

Such cases are testimony to the agonising conditions endured by women in militarised zones like KP and Fata.

Dr Shehla, a Peshawar-based psychologist says, "What can be more telling than the ordeal of this lady who on the one hand is dealing with the traumatic experience of losing her husband to terrorists’ ideology, carrying the stigma of being the wife of an extremist, and on the other hand, of being subjected to trafficking by none other than her own family."

The deadly terrorist attacks on the Bacha Khan University (BKU) Mardan in January and on the Army Public School Peshawar in December 2014 forced the government to impart firearm training to teachers and students, thus further militarisation of the Peshawar society.

Kolsoom, who runs a private school in Peshawar, says many women are worried about the gun-toting culture and are reluctant to send their kids, especially girls, to school.

"One such mother worriedly questioned what if a student or a teacher with firearms starts shooting at other fellow students or teachers?" Kolsoom added.

Although these problems have been in the limelight during all these years, they haven’t been addressed satisfactorily. The absence of women in peace negotiations or conflict resolutions is another key factor in the failure of addressing women issues properly in militarised zones.

Nighat Orakzai, Member Provincial Assembly KP (PPP) argues, "Women population of Pakistan has increased but still they are not included in peace negotiations. At the political level, they are neither included in the security-related meetings nor in the APCs for discussing and giving their valuable input."

It is high time that women were included at the strategic policy making level - not just to fulfill a formality of gender equality perfunctorily but to be heard seriously for their take on various issues. After all, most security agreements, negotiations with extremists sans women have already proved futile.