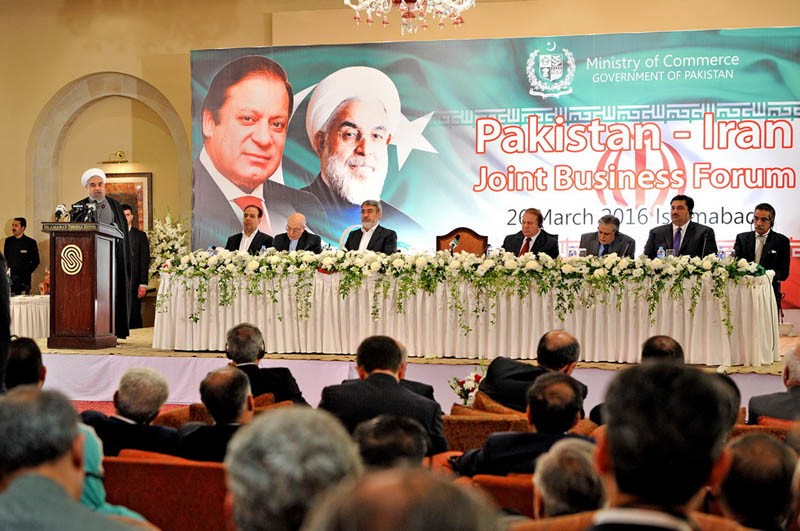 Both Iran and Pakistan have signed a Memorandum of Understanding (MoU) during the recent visit of Iranian President Rohani in a bid to promote bilateral trade and opening up of two more crossing points on Pak-Iran border, preferably by the end of year 2016.

Federal Minister for Commerce, Khurram Dastgir Khan, tells TNS, that he would personally visit the proposed new sites for opening up new crossing points by the end of April in a bid to increase bilateral trade up to the desired potential. "We will ensure development of infrastructure on the new border points without wasting any time. The existing routes will also be developed with latest facilities."

He says that Gwadar and Chahbahar Ports are not competitors but both these ports can complement each other because deep sea ships cannot anchor at the Iranian Port so those ships could utilise the Gwadar Port.

"In the context of China Pakistan Economic Corridor (CPEC) too, both Gwadar and Chahbahar can complement in years to come," he adds.

According to other high officials from the ministry of commerce, Islamabad has asked Tehran for providing a level-playing field to boost bilateral trade.

To give a boost to bilateral trade, the two countries need to offer better market access under formal arrangements. In this regard, in addition to the bilateral Preferential Trade Agreement (PTA), which is operational since September 2006 and already subject to review for a better performance. In the wake of a changed scenario after lifting of sanctions on Iran, the two countries will enter into negotiations for a Free Trade Agreement (FTA), including trade in goods, services and investment as well.

There are a host of issues which hamper bilateral trade between the two countries such as non-tariff barriers, absence of mutual recognition agreement, lack of banking facilities, infrastructure bottlenecks and trade through informal channels.

There are institutional arrangements for deepening commercial and economic cooperation between Pakistan and Iran, namely, Pak-Iran Joint Ministerial Commission (JMC) and Pak-Iran Joint Trade Committee (JTC) headed by ministers of both sides.

In addition to strengthening the existing institutional arrangements through more frequent interactions, a separate mechanism on expert/technical level needs to be put in place to deal with such issues and oversee implementation of the plan.

During the 7th Meeting of Iran-Pakistan JTC (Tehran, 21-22 April, 2015), both sides decided to expand the scope of Iran-Pakistan PTA. However, the emerging situation in the post-sanction period, demands accelerated engagement between the relevant authorities of the two countries for desired growth and expansion in bilateral trade.

The Joint Working Group (JWG) established in the 7th Joint Trade Committee (JTC) Meeting held on April 21-22, 2015 in Tehran shall act as Trade Negotiation Committee (TNC) for the FTA.

The JWG shall decide on schedule for the rounds of FTA negotiations and devise mechanism to ensure that follow up actions are taken within the indicated timeframe. The JWG shall meet on dates mutually agreed by both sides in June, 2016 in Tehran to agree on the Framework Agreement. The rules of origin, tariff reduction modalities and ratification procedures shall be agreed upon in the subsequent rounds of negotiations.

The FTA framework shall set modalities for tariff reductions on 80 per cent of tariff lines.

The FTA shall take care of the monitoring and implementation mechanisms. It shall be ensured that an inbuilt mechanism is provided for dispute settlement as well as administrative coordination in addressing operational issues after the implementation of the FTA.

The simplification of customs procedures, enhanced cooperation between the customs authorities, opening of more border points, infrastructure development and improved connectivity will go a long way in reducing the cost of doing business and driving up the volume of bilateral and transit trade.

An MoU for enhanced cooperation between the Customs’ Administrations of Iran and Pakistan will be signed within one year of the approval of the Five Year Trade Cooperation Plan.

Both sides shall enter into a Mutual Recognition Agreement (MRA) so the standards used by one country are given recognition in the other country. The negotiations on the proposed MRA will start within three months of the approval of the Five-Year Strategic Trade Cooperation Plan.