Of sirens and ignorance 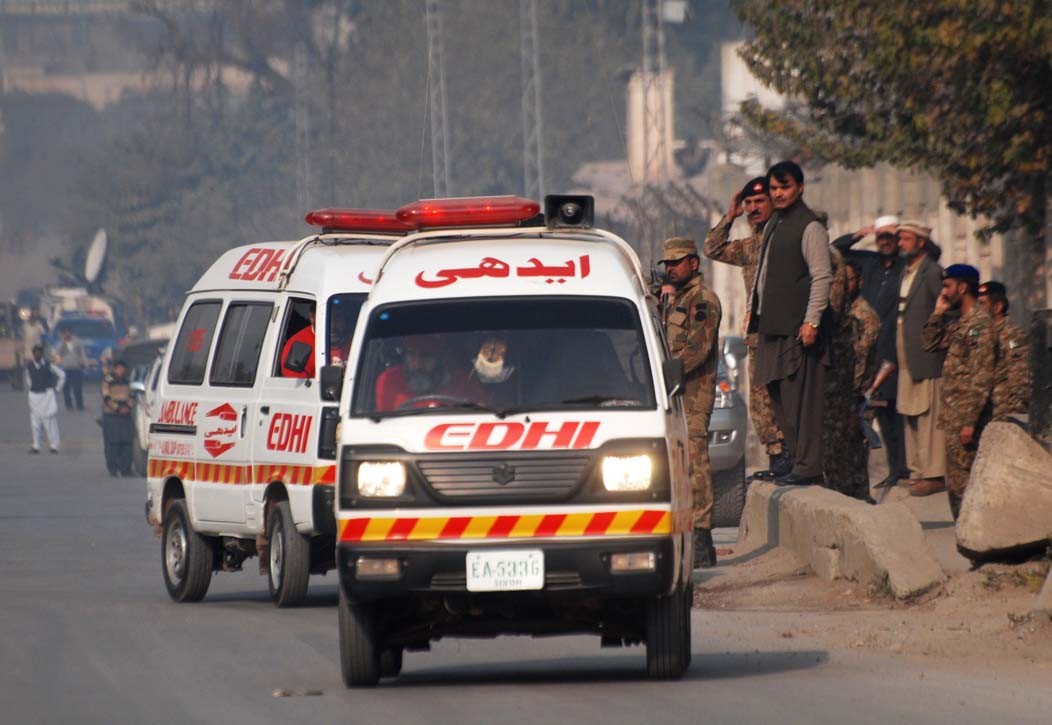 Karachi has seen emergencies like bomb blasts, gun fire exchange, eruption of fire, slaughtered people stuffed in gunny bags, road accidents, and so much more. Although the people of Karachi are heard blaming VIP movement (protocol) for creating traffic jams, they themselves play a role in it as well. Karachi not only has a population crossing 23 million, but also 3.3 million registered vehicles which use the roads in the city, according to the statistics available on the Karachi Traffic Police website.

When a bomb rocked the Bohra mosque a year ago, ambulance driver Mir* recalls picking up four dead bodies of which one had lost arms and legs. He does not remember putting on gloves in his six years as a driver of an Edhi ambulance to pick up body parts. That’s how he describes what an emergency means to him.

"The stench of the blood makes us sick. It is so difficult to drive after seeing such things. The traffic only makes it worse for us," he adds. Mir thinks that although the roads in the city are enough, it is the rickshaws, buses, and motorbikes that create difficulties for ambulances to find a clear path. "They prefer moving in front of the ambulance so that they can escape the traffic when other cars make way for us," he shares.

Another driver, Waiz Hussain, shares the dangers of being in this profession. "One of my co-workers was gunned down. That’s how dangerous our job can be in certain situations," shares Hussain who has been driving Edhi ambulances for 23 years. He recalls May 12, 2007 riots that took place between political parties in Karachi. "All the roads were blocked. It was almost impossible to deliver the injured or other emergency cases to the hospitals." According to him, it led to many victims breathing their last in the ambulance.

The ambulance driver agrees that their vehicles are only serving the purpose of delivery vehicles. "You’ll only find a stretcher or two in most of the ambulances in Karachi. Our job is just to shift patients from their location to the hospital." These drivers face abuse -- both verbal and physical, but they are meant to remain calm and concentrate on getting the patient to the destination.

Every time we give way to an ambulance we help strengthen humanitarian ties and play a role in saving a fellow citizen’s life, says Mohsin Ali Mustafa of Aman Foundation. "There have been occasions when our ambulance staff was forced to perform under the barrel of a gun by the patients’ attendants."

"The public needs to learn to give way to an ambulance in any case. The first hour after the accident is known as the ‘golden hour’. No time should be lost in getting the injured into hospital."

A 27-year-old citizen, Tauseef Razi Mallick recalls the night his grandmother passed away in an ambulance. "We were shifting her from a government hospital to a private one, which were kilometers apart. It was 10pm; there was traffic." He continued that she was being shifted in the well-equipped Aman Foundation ambulance. "The paramedic did inject her twice on the way to save her." But being an optimist, he does not wish to blame traffic alone nor the ambulance. He is of the view that death itself is a reality. "In my opinion, the government hospitals should be well-equipped, so that there is no reason left to shift patients from here to there. It is the responsibility of the government," he shared.

In this megacity alone, 66 per cent of the ambulance drivers have faced abuse -- both physical and verbal. This has been revealed in a study conducted by International Committee of the Red Cross (ICRC) and its partners. Research carried out by APPNA Institute of Public Health in cooperation with Jinnah Postgraduate Medical Centre (JPMC) and with the support of ICRC shows that ambulances in Karachi routinely find themselves blocked by other cars despite sounding sirens and messages given through loudspeakers. The results further reveal that ambulance staff are the most vulnerable group among all health care providers, facing the biggest share of violence.

To counter this phenomenon ICRC in cooperation with APPNA Institute of Public Health, JPMC, The Indus Hospital, Edhi Foundation and Aman Foundation have launched a media campaign on respect and right of way for ambulances. The campaign is part of the global ICRC project Health Care in Danger, which aims at improving the protection of health care services affected by or at risk of violence.

"Everybody just wishes to reach their destination as soon as possible. They are all so impatient," shares Dr Seemin Jamali, head of the JPMC’s emergency department. She states that an individual lane is needed for the transportation of vehicles carrying emergency cases. "It isn’t just the ambulance which carries a patient. Step out of this hospital and you will see cars, rickshaws and all sorts of vehicles bringing in patients." JPMC is the busiest government hospital in Karachi which attends to over 1,200 emergency cases on a daily basis.

Although Gul Sher, sitting inside the emergency department of JPMC, agrees that an ambulance should be given way, he asserts that ambulance drivers often misuse the siren. "Even when the ambulance is not carrying anybody, the siren keeps playing just so that they can have easy escape from traffic," complains the 46-year-old.

However, Dr Jamali is of the view that an empty ambulance is not an indication that it is of no use. "Who knows if it is headed towards an emergency? The public needs to learn to give way to an ambulance in any case." She quotes that the first hour after the accident is known as the "golden hour". No time should be lost in getting the injured into hospital.

For Najum Abbasi, ICRC Pakistan spokesperson, what is needed is a law that would make it compulsory for the drivers to make way for ambulances. "We also need a system that would allow the motorists to get out of the way efficiently." Abbasi thinks that cooperation of the police, city authorities and ambulance services is necessary.

The campaign being run by ICRC and its partners aims at informing the public of their civic duty. For this, a number of media outlets are running public-awareness messages, hosting talk shows that can serve this purpose. The hashtag#RastaDein is also being used on social media to spread the word.

Faisal Edhi of Edhi Foundation lays emphasis on discipline. "It is very important that roads are utilised well," he says. "Until there is no discipline in the movement of vehicles on roads in Karachi, it will be a struggle for all ambulances to move."

In the name of law

The traffic police of Karachi does not have any orders which authorise them to stop an ambulance from moving towards a certain direction. These are the words of DIG Karachi Traffic Police Amir Shaikh. Ambulance drivers can speed-up, break traffic signals and also traffic rules. "They can even do so during VIP movement (protocol) when certain roads are blocked for traffic," he adds.

The Provincial Motors Ordinance, 1965 empowers the government to make rules to exempt emergency vehicles from applicable traffic rules. "It also allows for such vehicles to be driven without permits." The National Highway Safety Ordinance, 2000, which applies to vehicles driven on ‘national highways,’ exempts ambulances on emergency runs from the duty to obey traffic signs.

Of sirens and ignorance