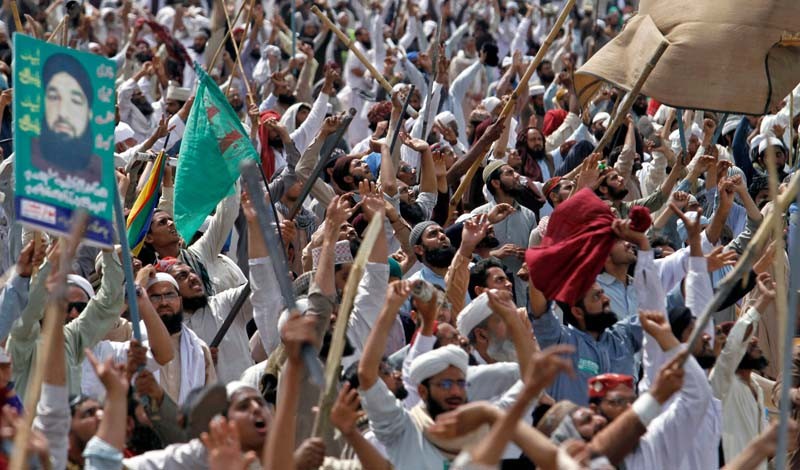 The clergy in Pakistan has been feeling the pressure ever since the state resolved to clean the society of the influence the former has wielded for decades. The clergy was looking for a hero to rely on.

The state’s decision to hang Mumtaz Qadri, the assassin of former Governor Punjab Salmaan Taseer, gave the clergy the poster boy it was looking for. After the indiscriminate crackdown against militants under the National Action Plan was announced soon after the Army Public School massacre in December 2014, the funeral of Mumtaz Qadri was the first instance that drew tens of thousands of clerics. This provided them the opportunity to push for their own revival.

On March 27, thousands of charged supporters of Sunni Tehreek marched towards the fortified diplomatic territory of Islamabad after a gathering in Rawalpindi to observe the chehlum of Mumtaz Qadri, ransacking public property and unleashing a trail of destruction.

The mob led by enraged clerics of Sunni Tehreek caught the government off-guard and it took the nervous administration about three days to vacate the so-called ‘Red Zone’ from a couple of thousands protestors demonstrating in front of the parliament, the very nerve of the state.

There are different views on how the sit-in saga unfolded and how the state should have resolved this serious issue.

Clerics claim that the protestors’ main objective was to get assurances from the government that it would impose Shariah in true spirit in the Islamic Republic of Pakistan and that the blasphemy laws would not be amended. "We protested to force the rulers to ensure hanging of all blasphemers," said Chief of Pakistan Sunni Tehreek, Sarwat Ejaz Qadri whose followers are said to have destroyed public property worth over Rs200 million including the newly-built four metro stations and the towers of Islamabad Safe City Project.

The government, however, was taken aback on this issue, says analyst Zahid Hussain. "But the government always remains in a denial mode on such occasions."

When asked to link the dots between this ‘dharna’ in the capital and the Gulshan-i-Iqbal Park attack, the Indian spy arrest and the Karachi sit-in, Hussain is of the view that "they are not completely isolated incidents". Mumtaz Qadri’s execution provided some room to religious groups to regain lost space and a chance to revive the Muttahida Majlis Amal, an alliance that former military ruler Pervez Musharraf cobbled together in the aftermath of 9/11 terrorist attacks in the United States. "Before Qadri’s hanging religious groups were apparently under pressure but now it seems this issue is being used for mobilising the public," adds Hussain.

"The question is: why were the protesters not stopped in Rawalpindi? "It is my fear that some people within the ‘administration’ have a soft corner for violent religious groups. It does raise several questions."

The government of Pakistan Muslim League-Nawaz (PML-N) seemed divided over the handling of the sit-in as many cabinet ministers were blaming the Punjab authorities which, according to them, failed to handle the angry protestors adequately. While others have termed it a failure of the Islamabad administration which first let Qadri supporters in and later called in the military to protect key government offices.

Interior Minister Chaudhry Nisar and Chief Minister Punjab Shahbaz Sharif wanted the use of force to disperse the crowd but Finance Minister Ishaq Dar and Railways Minister Saad Rafiq were opposed to it. Nisar’s view was that no government minister should meet the protestors and the clerics should come to the government instead for negotiations. Later, Senator Ishaq Dar convinced the protesting Sunni Tehreek leaders to give in. Avoiding questions of differences within the government, Nisar also claimed that no written agreement had been reached between the protesters and the government but the clerics told a different story.

Many within the PML-N believe the government was confused as it did not know till Wednesday evening how it would get rid of the protestors. The political impact of Lal Masjid operation, perhaps, stopped the government from using force against the protestors -- an experience it gained while dealing with Pakistan Tehreek-e-Insaf and Pakistan Awami Tehreek months’ long sit-ins that virtually paralysed the capital.

"As far as the response of the government to this sit-in is concerned, it was certainly nervous and overly cautious," observes political analyst Harris Khalique. "While there is no written commitment made with the protesting clerics in order to end the sit-in, the way they have dealt with them confirms the government will budge in front of any one invoking religion to prove his/her point."

Many believe that the civilian government was backed by the military when it executed Mumtaz Qadri -- a test case for the state when it comes to handling a sensitive issue like blasphemy.

The execution of Qadri was indeed a sensitive issue and the government did sense that this decision could trigger violence in the country. "I don’t think so. Premier Sharif could execute Qadri without the support of military," says Zahid Hussain.

Analysts think that the cross-section of clerics and religio-political leaders who had come together to offer the funeral prayers of Mumtaz Qadri did not participate in the sit-in. They cite the example of Jamaat-e-Islami leaders who participated in the processions gathered for prayers for Mumtaz Qadri but did not participate in sit-in of D-Chowk. Khalique says this sit-in was not seen to be as representative as Qadri’s funeral itself. "It finally came down to a show of Barelvi clerics."

Other analysts think that some elements within the state were supporting this ‘dharna’. The question is: why were the protesters not stopped in Rawalpindi? "It is my fear that some people within the ‘administration’ have a soft corner for violent religious groups. It does raise several questions," she says.

According to Abida Hussain, Qadri supporters were apparently enjoying some support from within the government; and that is why they managed to enter the Red Zone, albeit in small numbers.