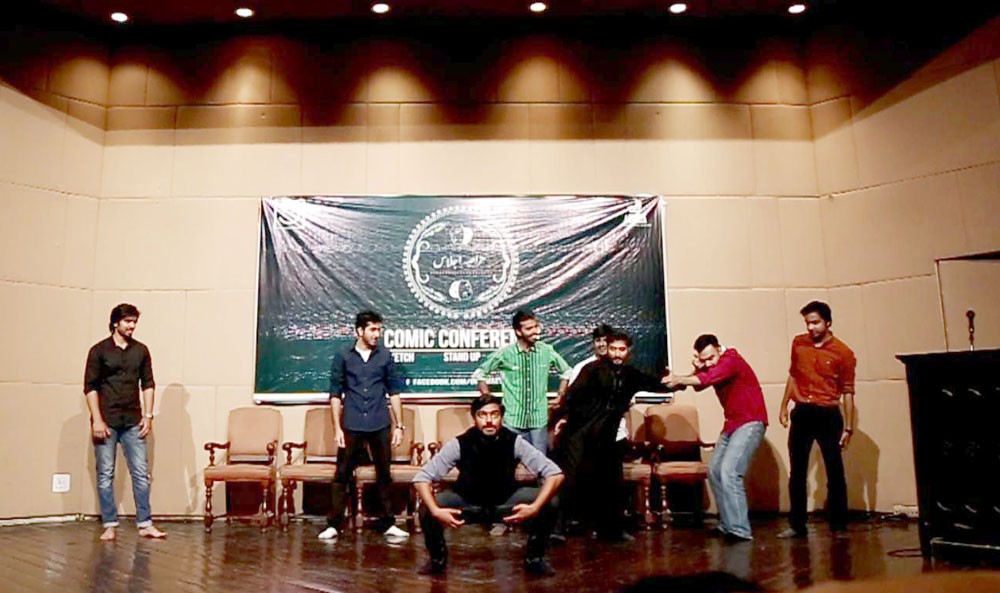 Whenever there is a mention of comedy and theatre in Lahore, two wide extremes are observed. On the one hand, you have the low-brow Punjabi theatre, loaded with double-meaning juggats (one-liners) and cheap dances, and on the other hand, there are amateur productions composed of English farces and indigenously put together Urdu/bi-lingual plays.

We have also seen standup, though this genre has not been explored to the full. The recently held ‘Comic Conference’ aka ‘Mazahyia Ijlaas’ sought to revive the improv act.

Produced by Shah Fahad’s Dramaducation which has carved its own niche in quality entertainment, the event was held at Alhamra The Mall.

The posters of the event promised a night full of mirth and laughter. Dramaducation’s troupe calling themselves "Pakistan Tehreek-e-Comedy" made a funny read. The Ijlaas itself proved to be breath of fresh air.

This wasn’t the first time Fahad had put together a farcical comedy. He had earlier done it variously with Muzakkar Muannas and Social Pagal etc. The Comic Conference was, however, different. In Fahad’s own ‘dramatic’ words, "Sketch/Standup comedy has had a confusing status in our society. It rises, goes into a decline, and then rises again!"

Entering the gate of Alhamra, the dreary decor contradicted the theme of the night. The chairs did not appear too inviting either. However, as the evening began, with Shah Fahad at the podium and auditorium slowly filling up, movement ensued.

The night’s activities were chiefly an effort to revive the status of standup comedy. Shah Fahad and his group have set a bar that they managed to raise further with their comic gestures and interaction with the audience.

Considering the nature of the event, it was to be a no-brainer that mostly the younger lot would like to attend. But this was just an assumption, a presupposition which was proved wrong as you spotted the older lot arriving in.

The evening began with an act of ‘Sketch’ or parody. The performers mimicked some of the renowned, regularly televised personalities of the nation. One could not help but be in awe of the accuracy and dexterity of the performers. The rest of the event was based on myrid of games which allowed for a great audience-performer interaction.

Even though cricket and cricketers remained a major interest, references of the Facebook sensation Qandeel Baloch came up, to an overwhelming response from the audience. Drones, drugs and national politics were some of the other subjects treated that night.

The group ingeniously improvised whenever required by their eager audience. The night concluded with a complementary performance by Qureshi whose vocals and agility as a guitarist earned him great applause.

According to Nayyara Shahid, a young lady who seemed to be completely besotted by the act, "Dramaducation is certainly crafty. The brilliance of each act sent me into fits [of laughter]. We must have more of such events."

Although, those who attended were completely satiated as they left the auditorium, one could not help but notice the lack of attendance. One reason for this could be that the event was ticketed.

"Potential visitors are disenchanted as soon as they come to know that an event is ticketed," said Shah Fahad, talking exclusively to TNS, after the show. "Not having a ticketed performance, on the other hand, would put the team in a financial problem."

According to Fahad, reducing the price is not out of question. "But for this to be executed, we need some sort of assurance from our sponsors."