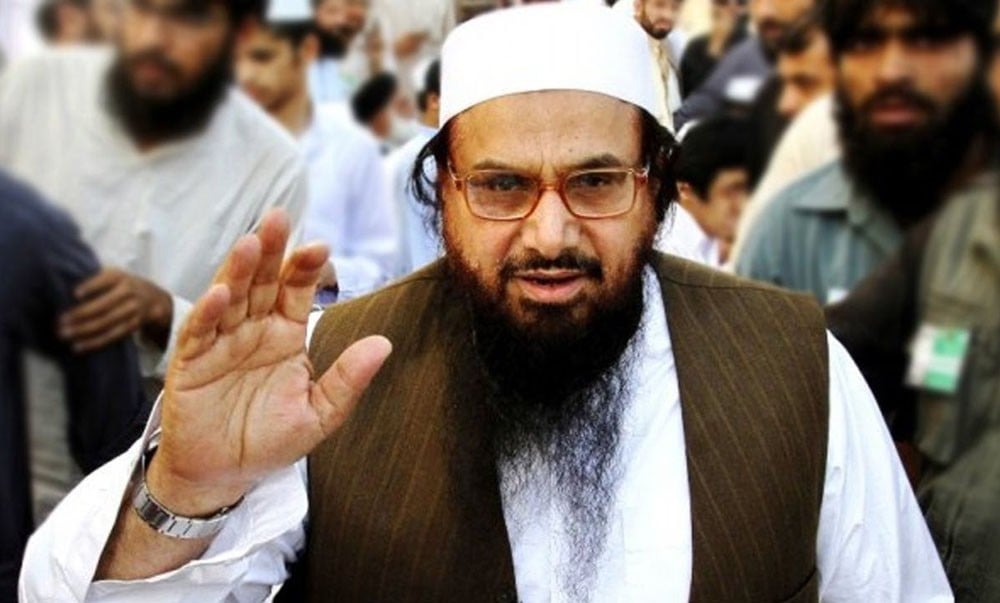 Hafiz Muhammad Saeed is very clear in his mind that India is Pakistan’s biggest enemy.

In a recent interview with TNS during his visit to Peshawar, he said it is his mission to raise awareness about this issue and keep reminding the Muslims in the subcontinent that Pakistan is incomplete geographically until Kashmir joins it and the states forcibly occupied by India are liberated.

The Jama’at-ud-Da’wah (JuD) head is nowadays visiting major cities in the country to speak at the Nazria Pakistan Convention for highlighting the ideology of Pakistan and motivating the people to become part of the movement to tackle challenges facing the homeland. The Nazria Pakistan Rabita Council is a new organisation set up by several religious organisations and Islamic political parties such as the JuD, Jamaat-i-Islami and JUI-S headed by Maulana Samiul Haq.

As he rose to speak at the convention in Peshawar, the 66-year old Hafiz Saeed didn’t look tired despite his hectic schedule. He had spoken at a similar convention the previous day in Haripur and was scheduled to leave Peshawar to attend yet another one the same evening in Rawalpindi.

For the next hour or so, he spoke loudly and spiritedly to his Peshawar audience, all bearded and motivated as only the believers in the cause had gathered at the hotel hall after passing through strict checks. The JuD activists were all over the place in the hotel and alert as Hafiz Saeed is one of the most wanted men for India and has a bounty of $10 million on his head announced by the US in April 2012 for his alleged role in the November 2008 Mumbai terror attacks.

Hafiz Saeed has been designated as an international terrorist and sanctions placed on him. First the Lashkar-e-Taiba (LeT) and then the JuD were declared terrorist organisations. The Falah-i-Insaniyat Foundation (FIF), the charity run by the JuD and active in relief and rehabilitation work in earthquake and flood-affected areas all over Pakistan, has also been under watch. According to Hafiz Saeed, the FIF is doing a lot more than is known as it is running 300 educational institutions including two universities and a medical college and is managing a healthcare programme and a vast ambulance service for patients.

Hafiz Saeed was not concerned by all these measures that are aimed at halting his activities and putting him out of business. He denied his links with the LET and described the JuD and FIF as political and welfare organisations peacefully and legally pursuing their objectives. He also pointed out that top Pakistani courts had absolved him of any involvement in the Mumbai attacks.

As the conversation progressed, it was time for Hafiz Saeed to turn to his favourite topic of India-bashing. "Am I wrong to term India as our biggest enemy keeping in view historic and legal reasons? It attacked East Pakistan and caused dismemberment of Pakistan to create Bangladesh. It occupied not only Jammu and Kashmir, but also Hyderabad Deccan, Junagadh and Manavadar. It changed the demography of Jammu to dilute the Muslim majority. India violated international laws by fencing the Line of Control in the Kashmir valley," he maintained.

Hafiz Saeed blamed India for sponsoring the violence in Balochistan, Fata and Karachi and for supporting the Sindhu Desh campaign. In his view, India is involved in the acts of terrorism in Pakistan.

Vowing to establish contacts with the Indian Muslims to make common cause on issues, Hafiz Saeed argued that India was originally known as "Bilad-i-Islamia Hind" because it was a land and country of Islam and Muslims.

About the Pathankot attack, Hafiz Saeed said he or his group was neither involved nor blamed for it. He reminded that Kashmiri freedom fighter Syed Salahuddin and his supporters had claimed responsibility for the attack.

Critical of the growing friendship between India and the US, he said he referred to it as "Ishq" (love) between the two. "This love affair is against Pakistan. The US also needs India against China and for economic reasons," he added.

Hafiz Saeed wants Pakistan to get close to the Islamic world and strengthen the Saudi Arabia-led 34-country military alliance. Stating that India can never be a friend, he felt Pakistan ought to stop making efforts toward this end. He also advocated closer political and economic relations with China.

In Hafiz Saeed’s opinion, the Islamic State, or Daesh, is a creation of the US and part of the Indian conspiracy to weaken the Muslim countries. He said the US was using Daesh in our region to avenge its defeat at the hands of the Taliban in Afghanistan. "We have taken a clear stand against Daesh. It has no future in Pakistan. We have published literature exposing Daesh and educate our people against its sinister designs," he added.