In its fourth season, Nescafe Basement gets plenty of things right. Instep lends an ear 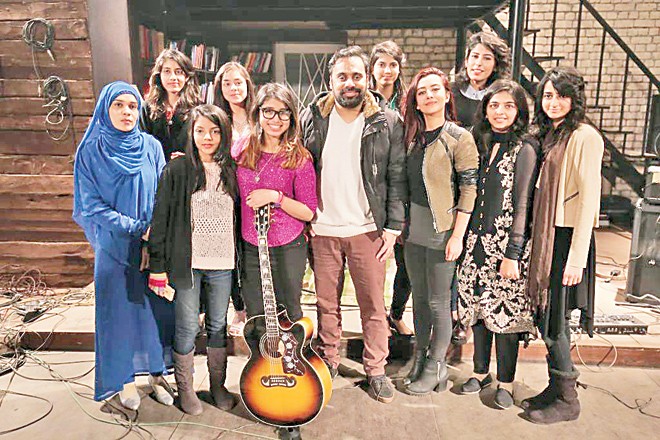 However, the scene changes for a couple of weeks every year as music shows make their presence felt.

While a show like Coke Studio, revered and criticized in equal breath (set to return later this year with season nine and for the first time, with multiple music producers) serves as a platform that celebrates modern mainstream sounds, eastern giants and explores regional sounds, Nescafe Basement, the topic of our discussion, plays home to underground musicians from all over the country.

Spearheaded by Zulfiqar Jabbar Khan aka Xulfi, the music show, funded by Nescafe, can be found on air currently as well as online as it returns with a new season. Slowly and deliberately, the show has carved an identity for itself after its initial years which included some criticism for offering covers instead of originals.

The season so far…

As this story goes into print, at least four episodes from the new fourth season are out and doing rounds of the interwebs and beyond while four are still in the pipeline. This season, like its predecessors is a mixture of covers songs, which according to producer Xulfi, help aspiring artists in understanding the language of music, and originals and so far, most of it works.

The first episode consists of two covers: the legendary Nusrat Fateh Ali Khan’s ‘Tere Jeya Hor Disda’ and Awaz’s ‘Jadu Ka Chiragh’ and it has to be said that it is the former number that leaves a lasting impression. First off, vocalist Zeeshan Ali steals the show with his husky voice and impressive range. From there the song develops into a modern qawwali with all the musicians coming together with their various instruments (violin, bass, tabla, drums, and guitars) in unison. This is a modern adaptation but one that is a sizzler. The musicianship on display is not only beautiful but confident and it works. This isn’t an easy song but Zeeshan and the rest of the young musicians (Misbah, Sherry, Asif, Zain, Asad, Sharoon Haider and Bilawal) own it.

In comparison, the second song in the episode, ‘Jadu Ka Chiragh’ feels incomplete. It’s got grunge, it’s fast, heavy and but it’s nowhere near as effective. Shamir, who handles vocal duties, could easily front a modern day rock band and find an audience. But this cover, unfortunately, keeps bringing the original Awaz song to mind. From a bunch of aspiring musicians, it’s a decent effort but it doesn’t elevate to the level of great.

The other Nusrat Fateh Ali Khan cover, ‘Gorak Dhanda’ is atmospheric musical goodness. And given the fact that this show aims to highlight the underground movement, it is an above average effort.

The third cover from the season is the iconic Attaullah Khan Essakhilvi song, ‘Kameez Teri Kali’, which gets a makeover on Nescafe Basement. Slightly psychedelic and meatier, the song is a modern-day interpretation and a complete reinvention. With musician Farhan Ali also making a special appearance, the pop-rock esque number is faster and vocalist Mehak Ali is never drowned by the music, which is fascinating to watch. Running over 8 minutes, the song gets a solid A for effort.

English musician John Newman’s ‘Love Me Again’ not only gets covered but it’s covered in a fashion that feels like the next direction for music. Though Pakistan can count several women amongst its musicians, an all-female act is somewhat a rarity and so this particular version stands out. Even if you don’t know the original song, it’s okay because this unit of musicians sizzles.

Producer and mentor Xulfi gets brownie points for bringing all these talented, aspiring female musicians front and center. Not surprisingly, the song has been endorsed by Newman himself as well as industry experts like Ali Zafar, Haniya Aslam and other notables.

‘Love Me Again’ brings together Maria Fatima on vocals and guitars, Kristin Kanaria on vocals and guitars, Anna Salman on vocals, Sanya Shahzad on bass, Sumera on tabla, Arfa on sitar, Janat Sohail on ukulele, Maham on keyboards and Mishal on drums and is easily Nescafe Basement’s most glorious moment. The musicianship on display is stunning and demands several re-plays.

The first original for the season, ‘Tu Mera Naheen’ by Rizwan Anwar is part-melancholic, part-mournful and sounds like a love song that could easily fit in the narrative of a contemporary Pakistani film. Running over 6 minutes, the song mixes several instruments together neatly and as a popish number, it clicks if you’re into that sort of music.

The second original tune from the season belongs to one Abdullah Qureshi who takes his cues from the era of nineties to conjure the song ‘Awaz Do’. An ode to self-belief, the song is drenched in rock ethos and though completely acceptable, it feels a bit redundant on the basis of its sound which is common to the modern music scene.

With several episodes and songs in the pipeline, this season of Nescafe Basement is possibly its strongest. Perhaps the only thing to be cautious about is the sound. Given rock ‘s popularity in Pakistan, it would be great if the sound of the show branches out in different dimensions where obscure notes can take the show to the next level.