The vagaries of a new coal regime

At a People’s Tribunal in Mauza Sipra, Muzaffargarh, residents condemn plans to build coal-fired power plants, forcible land acquisition, harassment by the police and the potential for environmental catastrophe 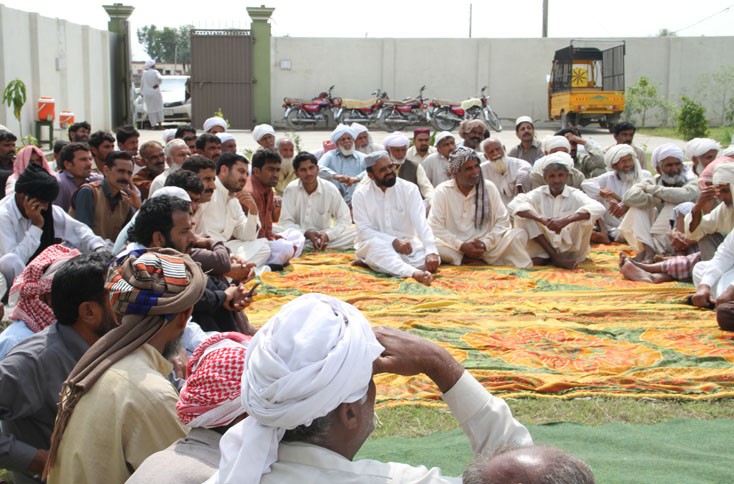 The setting is deceptively calm. A gentle breeze sweeps the grounds of a capacious farmhouse in Mauza Sipra, district Muzaffargarh, where concerned members of a local community sit cross-legged to deliberate on the grim prospect of a future darkened by the intrusion of industrial coal. Lawyers, human rights advocates, political workers and academics listen with alarm to testimonies being delivered at the Lok Sath [People’s Tribunal].

Adapted from traditional, vernacular forms of collective truth-telling common in rural South Asia, the modern day ‘Sath’ has evolved into an important means of organic community mobilisation against insensitive development projects in recent years. Dozens have now been organised across the Seraiki belt of Southern Punjab since the early 2000s, where official legal channels do little to protect the interests of small holders and landless peasants against corporate, state-led land-grabbing and ecologically destructive mega projects dreamt up by technocrats in distant metropolises.

The present mobilisation is a response to the proposed installation of two 660 Mega Watt coal-fired power plants in the Mahmoodkot area of Kot Addu tehsil by the government and its partners, KAPCO (Kot Adu Power Company) and CMEC PAK GEN. The plan has met fierce opposition from thousands of residents and Union Council officials of diverse political affiliations ever since it came to light last summer. A tense encounter between residents and surveyors accompanied by the police led to a minor scuffle in August, after which some 170 unnamed individuals were charged with a criminal offence in what eye-witnesses describe as a grossly fabricated First Information Report.

At the Sunday March 13 tribunal in Mauza Sipra, condemnation of attempts to foist the new coal regime on unwilling residents was bitter, not least among those whose lands have been earmarked for compulsory purchase to make way for the new constructions. "What use to us would the money be?" demands Master Niaz, a retired school teacher who, like many here, has no intention of accepting the compensation package on offer. "Our graveyards, our communities, our livelihoods -- everything we have is here."

A week prior to the Sath, provincial Minister Syed Haroon Sultan Bukhari promised a rate of five million rupees per acre to anyone willing to sell, an offer KAPCO has reportedly distanced itself from. The resulting confusion has caused further mistrust among this sizeable contingent of likeminded farmers and agricultural workers. For now, the government’s plan appears to have stalled. But campaigners are reluctant to breathe a sigh of relief whilst the land acquisition order remains in place.

Aside from those who stand to be displaced, residents of adjacent villages are horrified at the prospect of their habitat being polluted by anachronistic fossil fuel technologies associated with environmental disaster. The site planned for acquisition is within a 28km radius that already houses a disproportionate amount of mega infrastructure built since the 1980s: KAPCO’s plant, which has a 1638 MW capacity; Muzaffargarh Thermal Power (1350 MW); AES Lalpir (362 MW) and AES Pak-Gen (362 MW). Together with a nuclear installation being built in Kot Addu (1000 MW) and a Sinawan plant with 120 MW capacity, the grand total generation will be over 6,000 MW-- a significant proportion of the national grid. This is aside from PARCO’s Mid Country Oil Refinery, JIMCO oil installation, Fatima Sugar Mill and as well as smaller factories whose chimneys continuously pump black fumes into Kot Adu’s otherwise semi-rural landscape of crop fields, village hamlets and small town bazaars.

Justifications of the carbon drive tend to consist of familiar platitudes about the need for economic growth as well as more recent adages about the supposedly ‘game-changing’ China-Pak Economic Corridor, to which the financing of these plants has been linked. Saniya Awais, Managing Director of Punjab Power Development Board (PPDB), is reported to have recently described them as ‘ultra-super critical’ for the national grid. Responding to concerns about pollution with claims they will employ clean coal technology, she recently told a reporter writing for the monthly Herald: "We are encouraging the strongest environment damage mitigation measures," before adding assurances that land acquired would be "very fairly compensated," "even" in "not very agriculturally thriving" areas such as Muzaffargarh, where "there is a lot of barren land".

An altogether different narrative emerges from Mauza Sipra, where talk of ‘environmental mitigation’ is met with incredulity from campaigners who claim their area has been poisoned by industrial waste for three decades -- often in violation of permit requirements and World Bank Guidelines. Among those who live within the 28km radius, dirty industry is widely held responsible for high rates of skin disease, cancer, asthma and other illnesses.

At the Sath, discussion of the present crisis soon morphs into the airing of longstanding grievances about the exploitation of the people and natural environment of the Seraiki belt. After privatisation in the late 1990s, according to one participant with a background in engineering, Pak-Gen Lalpir dismantled its desulphurisation system and failed to plant thousands of acres of forests deemed necessary to offset green gasses.

Though not physically present, the governmental and commercial interests of central and northern Punjab behind the coal drive figure prominently in the tribunal proceedings as a threat to the wellbeing and rights of the local community. Viewed as the seat of an extractive, exploitative internal coloniser, ‘Takht’ Lahore is regarded by Muzaffargarh’s Seraiki speaking underclass as a source of historical oppression. Their fears about the coal plants stem from a perception that, as ever, the benefits of ‘development’ will be sucked up by the centre, leaving people in peripheral locations such as Mahmoodkot to absorb the environmental fallout.

As the afternoon wears on, temperatures rise, meteorologically and otherwise. There is talk by some of being ready to risk everything for the struggle. If in Lahore, opposition to the Orange Line speaks the language of heritage and aesthetics, in Muzaffargarh, the PML-N is on collision course with communities that withstood the wrath of the 2010 floods, and are now fighting for the right to breathable air and drinkable water. Thus far, its attempts to fashion a new coal regime in Muzaffargarh have served only to highlight the history of this region’s ruthless exploitation, triggering demands for investigation into past ecological crimes. Protest in recent weeks has involved unprecedented numbers of women in a region where politics is generally thought of as a male domain. Drawn spontaneously into the mobilisation by the depth of feeling against the planned initiative, their outspoken condemnation of the coal project has dealt a further blow to legitimacy of the authorities.

"They think of us as servile; they think they can do what they want to us because we don’t stand up for ourselves," vents Budh Union Council Chairman Rana Akhtar. If that may have been true in the past, he adds: "By the grace of God, for the first time people [in this region] are standing up for their rights."

The vagaries of a new coal regime