Fuller House: Blast from the past

Fuller House borrows many elements from the show it’s rebooting, but it’s just cornier, more forced, and lacking in charm 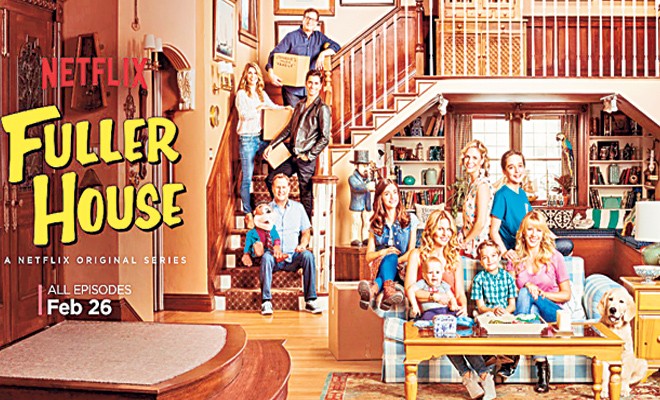 There can be no greater testament to the power of nostalgia than the recent reboot of Full House. The feel-good family sitcom has been resurrected by Netflix, two decades after it was cancelled by ABC, in the form of the spin-off sequel Fuller House, a predictable retread that cashes in on the appeal of its predecessor while delivering the show’s patent brand of warm, cheesy, cutesy humour.

Rehashing the plot of its parent series (while flipping the genders), the show centres on the recently widowed D.J. Tanner-Fuller (Candace Cameron Bure), the eldest Tanner daughter, who has lost her fire-fighter husband, with whom she has three sons - Jackson (Michael Campion), Max (Elias Harger), and Tommy (twins Dashiell and Fox Messitt). Realizing how overwhelmed D.J. is at the prospect of being on her own, her sister Stephanie (Jodie Sweetin) - now a DJ and aspiring singer - and best friend Kimmy Gibbler (Andrea Barber) - now the mother of a teenage daughter, Ramona (Soni Nicole Bringas) - decide to stay with her, moving into the old familial home to help raise her sons.

Also there to lend an occasional helping hand is the rest of the primary Full House cast (minus the Olsen twins), who reprise the roles they played during the original show’s run from 1987 to 1995, coming together in the pilot for a Tanner family reunion, before relocating to different cities - Danny (Bob Saget) and Rebecca (Lori Loughlin) move to L.A. to host their own national morning show, followed by Jesse (John Stamos) who joins them in L.A. to work as a music composer on the soap opera General Hospital, while Joey (Dave Coulier) goes back to performing in Las Vegas - and making sporadic appearances here and there for the rest of the season.

Fuller House is very aware that it exists primarily as a vehicle for administering a heavy dose of nostalgia to Full House fans, and it promptly misses no chance to fulfil its throwback duties. Self-referential jokes and meta humour abound as familiar faces return to the screen. Old catchphrases are dusted off, memorable incidents revisited. There is even a Comet Jr. Jr. for obvious nostalgic reasons (and added cuteness).

But once most of the original cast disperses after the first episode and the new setup comes into focus, even the comfort of nostalgia can’t keep you from wondering if the Full House revisit would have been better as a reunion movie instead of a spinoff series. Past its pilot, the show doesn’t really seem to have any reasons for existing, and if it had been a new, standalone series with no links to a beloved ‘80s and ‘90s sitcom, it is very doubtful that it would have been able to attract a substantial audience.

This obviously isn’t highbrow comedy and award winning acting, but the series even falters as a cheesy sitcom. Bure, Sweetin, and Barber are likeable enough as the leads, but everything about their storylines is unoriginal, predictable, and bland. The younger cast’s attempts at being cute often come off as cloying; child actor Elias Harger, who depicts middle child Max, is especially unconvincing, despite being adorable, mainly because he has been directed, for some confusing reason, to scream his lines instead of delivering them with a normal cadence. And the new catchphrases are downright cringe-worthy and very lazily incorporated into the script.

Just like Carly Rae Jepsen’s saccharine remake of the show’s theme tune, Fuller House borrows many elements from the show it’s rebooting, but it’s just cornier, more forced, and lacking in charm. This schmaltzy 13 episode first season doesn’t really have the quality to make a mark on its own merit, but if you liked the original series, then you will probably enjoy this spinoff too, especially when the old cast members make an appearance and the familiarity takes you down memory lane.

Fuller House is a predictable retread that cashes in on the appeal of its predecessor Full House.

Fuller House: Blast from the past