Though elementary in content, the Australian Fashion Masterclass, organized by Ladiesfund and the Australian Trade Commission, proved to be an informative session for both emerging and experienced fashion designers 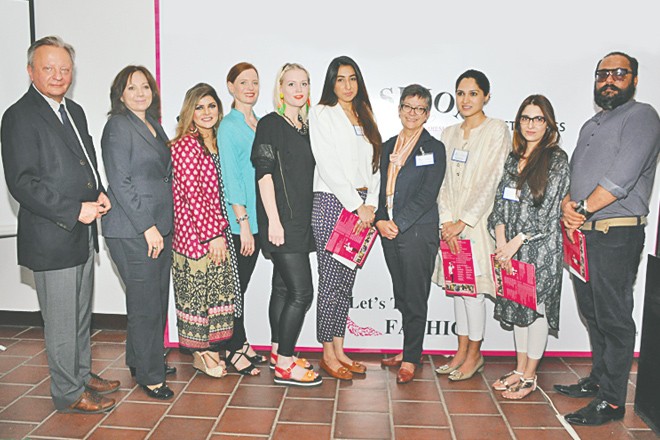 Positing the Australian Fashion Masterclass (AFM), powered by Ladiesfund and held at the Indus Valley School of Art & Architecture (IVS) last week, as a "Masterclass" may have been hyperbolic and akin to comparing, for example, the culinary exploits of Pakistani morning breakfast shows  with MasterChef  Australia given the rudimentary,  ‘Fashion 101’ nature of the 90-minute tutorial conducted by  visiting trainer Heidi Phillips from the Royal Melbourne Institute of Technology( RMIT) Melbourne, Australia. But also given that many fashion schools and programs in Pakistan don’t do enough to impart practical business knowledge to their students, including how to successfully enter international export markets (and the fact that there  are a plethora of untrained "fashion designers" milling the local fashion stratosphere), the workshop organized by the Australian High Commission and Australian Trade Commission partnering with Dawood Global Foundation was an admirable effort and an informative exercise, albeit an elementary and introductory one.

In November 2015, a group of Pakistani women designers and SME owners went to Australia as part of a program with Aus Trade (the Australian government trade commission for Australian exporters and companies wanting to do business with Australia). They visited the Royal Melbourne Institute of Technology (RMIT), where Phillips had studied and had received a diploma in Product Development and Merchandising in 2008. Contemporaneously, there was also a presentation at the Pakistan Society for Training and Development (PSTD) in Karachi on how to sell to Western markets, where the women designers wanted to gauge specifically how to alter their fashion products for the Western market. Out of these two events, and due to the relationship Aus Trade had with RMIT, Phillips was contacted to conduct the Australian Fashion Masterclass at IVS and a workshop at the Lahore Chamber of Commerce and Industry with its mix of fashion students from Pakistan Institute of Fashion Design (PIFD) and the College of Home Economics and women from SME, earlier.

The Australian High Commissioner HE Margaret Adamson was the chief guest at the workshop and amidst a hectic schedule visiting Karachi from Islamabad presciently shared her thoughts. "Pakistani fashion design and textile industry are important contributors to Pakistan’s economic growth, and can promote a contemporary and vibrant image of Pakistan around the world. Through this initiative, we are pleased to support Pakistani women entrepreneurs to establish themselves in international markets, including Australia," he said.

Adamson also spoke about the vibrant export potential of the initiative and the cultural exchange focused on youth which  "hit all the buttons" adding that she would like to see the vibrant textiles of Pakistan on the streets of Australia and lauded Pakistani designers for drawing on their cultural heritage.

Speaking on behalf of Ladiesfund, President Tara Uzra Dawood said, "With #LFAusTrade, together with the Australian High Commission, we have facilitated a fruitful and meaningful dialogue that will enable designers to better understand product extensions, different target markets, sales beyond borders, as well as get ideas for their own future local collections." Acknowledging the talent of "amazing Pakistani designers" she however felt there was a need to impart knowledge to them and help them create designs that have an impact by "putting a western touch to eastern clothes". Dawood added that she would like to see Pakistani brands become global brands and saw the workshop as a means to empower Pakistani designers. "Such events will not only give confidence to budding designers but it will also open opportunities for them," she concluded.

The interactive workshop featured sample design pieces by leading fashion designers Sania Maskatiya and Tena Duranni; LadiesFund and SME designers Shaheen Khan of Khanz Designs, Bushra Adnan, Irum Fawad and Anjum Zehra; handbag and accessories designer Ayesha Fahad, as well as the work of select IVS students (including a past Bank Al-Falah Rising Talent winner and Neha Ghazali, who designs for Al Karam) via a PowerPoint presentation of their sketches and mood-boards. Each collection was then critiqued by Philips on how to "tweak" it to appeal to the Australian market. For example, a shalwar could be sold if the shape was slightly altered and made to look like a dress worn with sandals, or the print detailing of a Khaadi kurti could be used as an all-over pattern on a skirt.

High-end designer collections by the likes of Sania Maskatiya and Tena Durrani were also evaluated. Sania Maskatiya displayed pieces from her S/S 14 Kuamka: Awakening capsule which drew inspiration from African geometry and the S/S 15 Khayat: The Tailor Collection; a homage to tailors with digital prints of spools et al. Phillips enthused about the "great designs" which she could easily envision in Australian stores and which were "spot on" for a niche luxury prêt market. Phillips suggested that costs could be reduced by, for example, simplifying and removing the decorative inner lining of an already elaborate jacket from the Kuamka capsule.

Tena Durrani, who showed bridal pieces from her Swarovski Dubai Showcase, was a truly involved and earnest participant who wanted palpable answers as to how high-end bridal wear with handiwork crystal beading and threadwork could be tweaked for the Western market. Phillips opined that an average consumer would not shell out such high prices on an outfit, although some brides may spend up to $10,000 on a wedding dress but would focus more on the look and feel of the garment as opposed to the label unlike the Pakistani bride, who might insist on a "Bunto Kazmi", for example, for her wedding day.  To meet the cost effective standards of the Australian market, Phillips suggested that Durrani can perhaps keep the embellishment on the bodice of a wedding dress and get rid of the trimmings on the skirt and further reduce costs by removing the beading, adding that sequins were currently on-trend in the West.

Phillips, who works in Melbourne, in the area of design, production and business development, as a Women’s Designer and Product Developer for a sleepwear brand, said she was delighted to be able to have such interactive dialogue and discussion with so many established and budding Pakistani designers.

Phillips said she had only one or two weeks to prepare the AFM workshop but based on her industry experience, she thought she was able to deliver a helpful and straight forward workshop to the women in this time frame, adding that Pakistan was the first country she had conducted the workshop in. "I felt very welcomed by everyone and it was a great experience for me, so I think it was a good introduction."

Due to this combination of roles she says she has a very holistic approach when designing, always keeping in mind the bottom dollar. "I would typically research my market and who I am selling to before designing a range. As I also directly worked with offshore suppliers, I negotiated cost pricing with them to ensure business margins were met and production timelines were kept," she explained

Phillips said she researched the Pakistani fashion industry before coming to Pakistan by mainly using Instagram and searching hash-tags to gauge a feel and garner an authentic view of how women in Pakistan dressed. She also perused images of previous Lahore and Karachi fashion weeks.

While in Lahore she tried to sample a wide section of stores including ChenOne, Sapphire’s flagship store and the stores on M. M. Alam Road and at the Gulberg Galleria .  "I enjoyed seeing all the bridal wear in Lahore, the details and fabrics were exquisite and very different to what you find in Australia."

In Karachi, Phillips visited Dolmen Mall Clifton and explored myriad stores including Khaadi, Sheep, Generation Gulabo and Sania Maskatiya among others. "Unfortunately I did not have that much time to do shopping," Phillips bemoaned.  "However I did buy some things from Sapphire, Ethnic, Generation and Sania Maskatiya. I love the colour and textile patterns available here, very different to what is available in Australia. I’m also a big fan of the traditional jewellery and bought some amazing earrings with really cool gems from a designer, whose name I did not ask."

The million dollar question however is that how relevant was it really to suggest Pakistani designers to tweak their indigenously Pakistani designs for the Australian "western" market when they could just  attempt to sell their ethnic clothes to the Asian diaspora in Australia?

"While there is definitely a market for East Asian diaspora fashion in Australia, it is a small percentage when considering the whole of the Australian market." Phillips ripostes. "So I think for Pakistani designers to have widespread appeal and success in Western markets, it’s integral that they slightly alter their designs to keep in line with Western styles. In saying that, I do think it is very important for them to keep elements of their traditional Pakistani design and capitalize on their exquisite embroidery skills and traditional pattern design as it gives them a point of difference and is a great selling point," Phillips added.

In her opinion which Pakistani designers have the most potential to infiltrate and do well in the Australian fashion market given some tweaking, and why? "I am very excited to see what Sania Maskatiya continues to develop for the Western market as she has already started to create some very fashion-forward and high-end pieces for the Western market. I loved seeing Tena Durrani’s marvelous bridal wear. There is definitely a market for the intricately beaded pieces she produces and I look forward to seeing where she takes her designs. Overall, there was a lot of promise in all of the women designers I came across. They all use great colours and design elements in their clothing; it just requires small changes to the garment shape for them to do well in Australia," she said.