The LLF seems to be fairly clear about its agenda and primary target audience: it caters to the artistic, literary, and cultural tastes of the ‘educated’ elite of the country. The question is whether the charge of elitism must be a criticism in this context 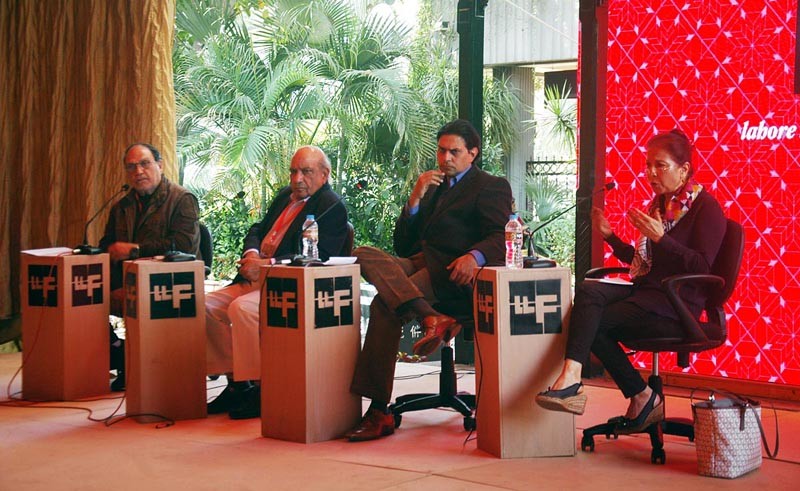 "I’ll read the [English] poem very slowly for those of you who didn’t go to Aitchison," said speaker F. S. Aijazuddin during his concluding remarks to the audience during the festival’s last session. Such jokes can be quite amusing admittedly, and there must in all fairness be space somewhere in society for this kind of wit. The Lahore Literary Festival (LLF) seems to provide such space.

It also provides for an environment where the prime venue and timeslot and for the general audience’s entertainment in the city of Lahore is devoted to an English-language play for two evenings in a row. If it was ever the desire of your heart to revive memories of convent school days and watch a classic American epistolary play performed in Pakistan by two local actors, the festival this year made ample and elegant provision for it.

The LLF thus seems to be fairly clear about its agenda and about the identity of its primary target audience. It caters to the artistic, literary, and cultural tastes -- not to mention, of course, the political desires and aspirations -- of the ‘educated’ elite of the country. The question is whether the charge of elitism must be a criticism in this context. Though it is not necessary that all high-quality endeavours be elitist in nature, experiences the world over seem to support the idea that the more elitist spaces are often the ones conducive to efforts of higher quality. The LLF 2016 would certainly seem to bear out that experience.

While the festival’s programme was overwhelmingly dominated by English-language sessions for yet another year, many of these sessions were of a considerably higher quality than those that take place at other major such festivals in the country. There seem to be two reasons for this: unlike the Karachi Literature Festival (KLF), the choicest parts of the LLF rest on the ability to attract a number of very select foreign speakers who have achieved significant international renown in their fields of expertise. Considering the solid research credentials of specialists such as historian A.G. Noorani, Urdu scholar C. M. Naim and art historian B. N. Goswamy, it is no matter of surprise that their sessions proved to be the high point of the festival in terms of quality of discussion. Then there were the more commercial draws such as actress Sharmila Tagore and food writer Madhur Jaffrey, who may also certainly be regarded as well-known and experienced speakers in their field.

The presence of such an interestingly large amount of across-the-border expertise certainly appeared to be one of the most vital factors in assuring a decently high standard of discussion at this year’s LLF.

The second reason for the higher quality of discussion at the LLF is that its panels (both English and Urdu, even where they featured the same old local names and themes) by and large seemed to be much more crisply moderated, and meticulously and sparsely put together than those of its Karachi counterpart.

The KLF’s panels seem to have displayed a regrettable tendency towards flabbiness in recent years, with the same generic, broad-sweeping titles being endlessly recycled and a core gallery of familiar-looking speakers appearing without pause.

While the KLF now actually feels very much like a festival which actively draws on the energy of its host city, the LLF, in its present form, seems at different moments to give off more of an atmosphere of either a select academic conference or a private gallery viewing.

The LLF, meanwhile, seems to have resisted the temptation to crowd their speakers on to multiple relevant and irrelevant panels in the guise of co-panellists or moderators, and concentrated instead (at least some of the time) on sessions showcasing a specific example from the work of a single scholar in his/her particular area of expertise, as established by the organisers’ close attention to and inspection of the speaker’s list of published works. This gives audience members the opportunity to take back something new and specific each year in terms of research or artistic exposure, rather than being subjected to the same hackneyed observations year after year at panel discussions based on a hodgepodge format.

That said, the LLF’s sessions this year were not without their less proud moments too. One of the saddest examples of this perhaps was the last-minute announcement adding politician Aitzaz Ahsan to a panel on Mir Taqi Mir’s poetry and personality -- a panel which had till now been composed of two such accomplished and experienced Urdu professors as Khursheed Rizvi and C. M. Naim as well as two senior Urdu fiction writers/poets. It is difficult to fathom which of the achievements of the sitting senator were deemed to earn him such deference in this regard, the effect of his inclusion being a considerable lowering of the tone of the event as Ahsan chose to present some terribly bizarre ‘historical background’ to explain Mir’s poetry -- remarks which thankfully were shot down in no uncertain terms by a co-panellist who had to his credit an entire book on Mir’s life.

As often reiterated by critics and well-wishers of the two festivals, while being welcome additions to the country’s literary landscape, both the LLF and the KLF have a considerable way to go before they can exploit their true potential as critical forums to establish links between the country’s literary and academic figures of worth and their readers. So far, however, several features of the LLF serve only to underline some appreciable achievements of its Karachi counterpart.

Despite (or perhaps because of) having to manage much larger numbers of sessions and attendees, the time-keeping at the Karachi Literature Festival has been impeccable and the organisers make strenuous efforts to personally ensure that moderators devote a certain portion of each session to facilitating queries from the audience.

Even leaving aside the security-related venue issues which plagued the festival this time, the sessions at the LLF seemed to run regularly off-schedule for no apparent good reason, with much undignified hustling and shouting occurring between the festival staff and attendees. There also appeared to be no consistent arrangement in place to ensure that there should be time for a Q and A even at the end of sessions where logic absolutely demanded it, this being yet another sign that the festival organisers were less than focused on the needs of the general audience.

Perhaps this last tendency also forms at least part of the reason why the LLF’s organisers also appear less eager to allow their sessions to be viewed later by interested members of the public who could not make it to the event. While the Karachi and Jaipur festivals, as well as Delhi’s Jashn-e-Rekhta, have long favoured the policy of uploading recordings of all sessions online for free viewing by enthusiasts near and far and have thus built up quite an online archive over the years, the LLF’s organisers instead choose to sell recordings of previous years’ sessions at the festival venue in the form of CDs, with the disc for each individual session being sold separately for a not inconsiderable price.

In the evolved form of the sessions at the KLF for the last several years, there appears to be plenty for all classes of society (and increasingly also for more ethnicities of the city), and by moving about among the sea of attendees, a visitor may pick up a sense of a wide cross-section of the city of Karachi and even some nearby cities. This serves to give the KLF an energy all of its own even on repeated trips year after year.

By contrast, a visitor to the LLF may sometimes feel that it is almost incidental that the festival is taking place in the city of Lahore, for aside from some of the lovely Mughal-styled branding, there seems to have been relatively little effort to tap into the city’s own particular (Urdu/Punjabi) literary and cultural resources or those of its surrounding environs. In fact, the Karachi festival ironically seems to have displayed a more continuous commitment to Punjabi entertainment by soliciting the services of a literary figure like Anwar Masood for several years.

If the LLF’s major aim is to draw on the best of Pakistan’s English market (there being nothing particularly terrible about this aim, given English’s importance to our country’s cultural and intellectual landscape), then it may still appear curious why the city of Lahore, rather than Karachi (or even Islamabad), has been chosen as the venue for such a festival when the latter two cities are typically seen as possessing even more heavily Anglicised spaces with potentially bigger audiences for entertainment of this sort.

As it is, while the KLF now actually feels very much like a festival which actively draws on the energy of its host city, the LLF, in its present form, seems at different moments to give off more of an atmosphere of either a select academic conference or a private gallery viewing. While the latter two types of events have their own tremendous and undeniable importance for society, Lahore’s literary scene, it seems, still awaits a festival in a truer sense of the word.

Since there is little enough of local colour in the LLF (certainly little that cannot be had in equal doses at the KLF or other venues), for that part of the ‘educated’ elite of the country which has periodic access to conferences and seminars abroad, there would appear to be no urgent reason to rush to Lahore to experience something more or less similar. However, for those who are residents of the city of Lahore, catching a session or two of the LLF is certainly a good opportunity to experience some often noteworthy imported delights.