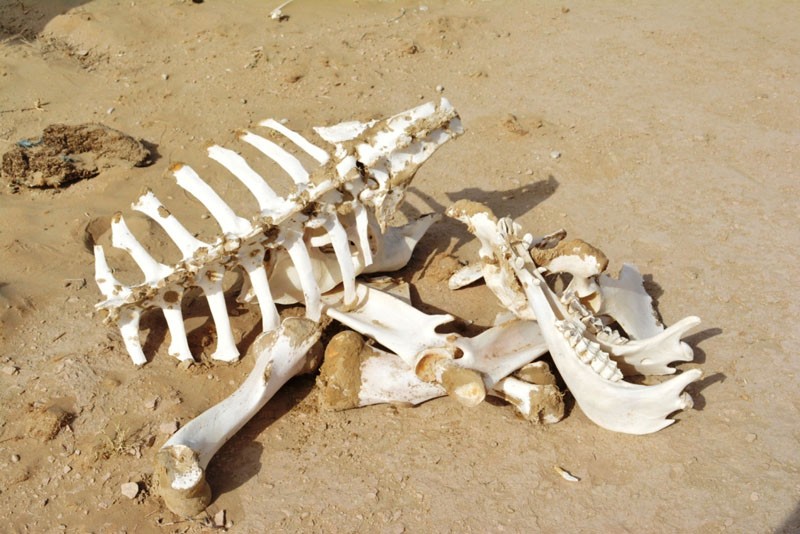 Faced with a serious drought in his area, Ali Khan, a livestock owner in Darband Village of district Nushki, is in a dilemma about how to survive. "We can either feed our children or our animals," says Ali Khan, who is already facing a debt of Rs250,000 which he used for buying fodder for his livestock from Nushki city. "I don’t know how I would repay the loan."

Severity of drought hitting Nushki district can be gauged by a visit to Piri, local term used for the place where livestock is traded. All animals present for sale are thin and weak and one can easily judge that they are malnourished. Qasim Ali, a livestock vendor, claims that a camel which he used to sell for not less than Rs150,000 now fetches only Rs35,000. He laments that no one is willing to pay more than 2,500 for a sheep which he used to sell for Rs15,000 before the drought.

Darband, a village situated 16 kilometres from Nushki district, is home to 95 families who depend on livestock as their only source of income. Each family on average has 50 livestock in number which they rear for their living.

Molvi Khuda-i-Noor, another livestock owner who lives next to Ali Khan’s house, complains that the government has provided little help in the current spell of drought. "We are wholly dependent on livestock for our livelihood and if we lose them then we lose everything," he grieves. "We will starve to death ultimately if the government does not come to our rescue."

Drought has taken its toll on the children of the area as well. Muavia, the10-month old grandson of Molvi Khuda-i-Noor, is weak and in poor state of health due to acute malnourishment.

Dr Mushtaq Mengal, senior medical officer in DHQ hospital Nushki, says that he attends to several patients daily with complaints mainly related to malnourishment. So far there is no data available for deaths caused by drought in Nushki. However, Dr Mengal claims the rural populace of Nushki district is suffering a great deal of misery due to the drought. He warns that a Thar-like situation can take place in Nushki in the near future if no steps are taken.

In rural Balochistan, livestock and agriculture are the primary sources of livelihood for the people. Rural economy of Balochistan hinges on the prosperity of these two sectors. Unfortunately, in some districts of Balochistan rural economy is suffering a huge blow due to the ongoing drought which is silently destroying agriculture and livestock. Nushki district, 140 kilometres from Quetta, is among the most affected districts faced with drought. According to the 1998 census, population of Nushki was 98,000.

Ismail Sumalani, Deputy Director Livestock, claims that there is slow-onset drought in Nushki for the last 8 years which has become severe in the last 3 years. He added that three union councils (UCs) of District Nushki -- Daak, Anam Bostan and Keshangi -- are the most affected with colossal loss of livestock.

Haider Khan Mengal is the former nazim of UC Daak which is situated at a distance of 54 kilometres from Nushki city. He claims that thousands of families from UC Daak have migrated to Nushki city due to drought. "In 2005, the number of registered voters of UC Daak was 4,500 which has reduced to 3,000 in 2013 as people migrated due to the drought." He adds that UC Daak will be completely deserted if no action is taken to rehabilitate the people.

In October 2014, the provincial government announced Rs1 billion for drought relief. But not a single rupee from that amount has been utilised to help the drought-affected people in Nushki or other parts of the province. The only step that the government took in this context was to name 2015 as the year of livestock.

Hameedullah Nasar, Deputy Commissioner Nushki, agrees that the situation of the drought in the district is alarming. He reveals that nomad tribes of the Nushki district have migrated to Afghanistan due to the drought. The DC explains that the district administration of Nushki had sent the drought assessment report to the provincial government in last December and is waiting for its response on the report.

Zahid Saleem, Director General of Provincial Disaster Management Authority (PDMA), does not agree that drought situation in Nushki is severe. "There is a drought-like situation in Nushki and not a full-fledged drought at the moment," says Saleem, adding that the need assessment for drought has been completed and the PDMA is in the process of chalking out short and long term drought relief plans. He says he has requested the provincial government to convene a meeting of the Provincial Disaster Management Commission (PMDC) to discuss drought relief activities.

Amid the bureaucratic delays in relief for the people, local people have formed a livestock union that recently staged a protest in Nushki city. Haider Khan Mengal demands the government should provide financial help to livestock owners to help them for the time being. He warns, "We will intensify our protests and also camp outside the Quetta Press Club in protest if no action is taken to help the drought affected people of Nushki."

Learning from the best