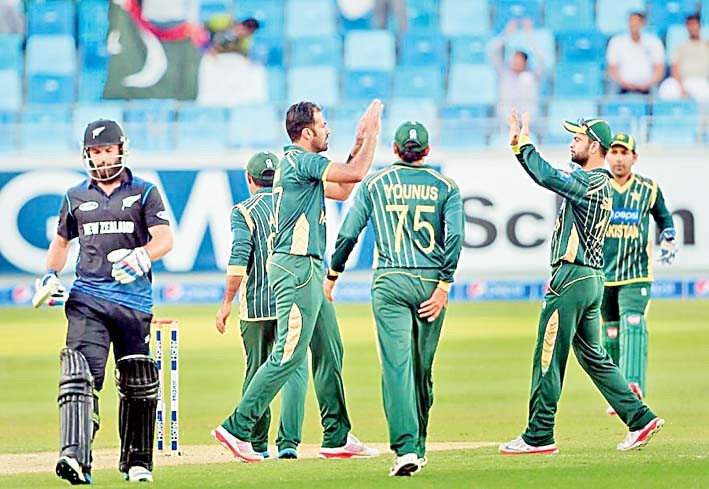 Head coach Waqar Younis said after the end of the One-day International series against New Zealand that Pakistan could have been the winners 2-0 instead of the other way around. Some truth in that as the Black Caps were 99-6 in the first ODI and then faced an uphill task to reach Pakistan’s 291 in the third when rain shortened the target (though overs reduce too but a smaller target allows for wickets to fall without the same level of pressure). However, what is more pertinent to ask from him is then why didn’t we win the series 2-0? Where was the finishing?

In fact Pakistan has been struggling with this aspect since the series against England in UAE. Then too they could have easily won 2-1 instead of losing 0-3. Two games were lost from winning positions then as well.

This is where Waqar has to step up and take responsibility. There appears a mental weakness under pressure or lack of a clear plan to finish the game, or both. Yes it is the captain who loses the game on the field and Azhar Ali has been admitting to not being able to rein in things near the end of the innings whether when bowling or batting. But when this occurs frequently it is the coach who needs to sit with the captain and with his experience guide him through this inability.

Considering Waqar has played under Imran Khan, Javed Miandad, Salim Malik and Wasim Akram -- all shrewd readers of the game -- and having himself skippered the Pakistan side for two years where he managed a couple of close wins, he should be able to chaperon Azhar on the planning table or counsel in post-match discussion.

And he has with him perceptive cricketers Mushtaq Ahmed who has played under the same captains as Waqar and Grant Flower whose brother Andy was one of the finest captains on the international scene and coached England astutely in fact turned around the team think.

Whatever, the damage has been done. Pakistan have slipped to No.7 in T20I rankings after losing the series 2-1 whereas they were sitting pretty at No.2 before they played England late last year. And in ODIs they continue to wobble at No.8, where they are 10 rating points below Bangladesh and 1 point above West Indies.

For over two years now I’ve been saying that we are constantly belittling the one batsman who can be our best opener. And that is Sarfraz Ahmed. Too many chances have been given lately to Ahmed Shahzad who has failed miserably. Sarfraz has excelled almost every time he has opened and even when sent at No.6 he has scored runs where his specialist colleagues have fallen cheaply. Simply can’t understand when Waqar, Azhar and Afridi will get over their bias.

Sarfraz hasn’t helped his case by batting lower down when he has captained domestically. But again that could be because he wants to give his specialist openers a chance and they don’t fail him as much as the international openers have done their coach.

It is sad to see Sohaib Maqsood’s decline. His is a talent lost it seems. Even when he does get to 25 runs or more he struggles and falls not soon after. It has always been arduous progress.

But I don’t quite understand what the criticism is of Rizwan. He should be a permanent fixture in both T20 and ODI games and yet he was dropped in the opening T20s and it has to be seen that he was run out twice on this tour. It should not be forgotten that just last year in Sri Lanka he was leading spearheading Pakistan’s counter attack in the middle order. On top of that he has been a fantastic fielder wherever.

Likewise the axing of Imad Wasim for the final ODI was downright ridiculous. He has been one of Pakistan’s finest finds of this decade alongside Yasir Shah. Even when he returned from injury he immediately stepped in with a sound performance. Dropping him for the third ODI must have dented his confidence no less. He is a vital cog in the team strategy and we have to nurture him. Instead we foolishly went for four of the same in the final ODI; it seems we at times create needless world records (such as this being the first time that four left arm pacemen played for the same side in an ODI).

This resulted in a monotonous line and length and the Kiwi batsmen made the best of the lack of variety. What also hurt is watching four Pakistani fast bowlers struggling to bowl the yorker, something this nation’s spearheads have been renowned for. Waqar again has to be questioned here. He was the king of the toe crushers and as coach he should have by now honed just about every fast bowler under his stewardship.

Instead what we saw was a string of short balls couple with a bouncer here and there. These were home pitches to the New Zealand batsmen and they are used to this pace, in both domestic tournaments and against international teams. Not only are these ineffective tactics against such batsmen but it also took away the most effective weapon bowlers have in stemming the tide.

We are a few weeks away from the World Twenty20. That is in India where the pitches are hard and even more batsmen friendly. Its only yorkers that do the trick there. Once again before a world tournament we are lost as to what is our final XI. In fact what is our first squad. Before the tour began Haroon Rasheed had said that at most there would be one, max two changes, for the World Twenty20.

Pakistan may just go for that choice; and this may be their best squad. But clearly the team management have not just confused themselves, they’ve confused the players.