Tales from a bygone era 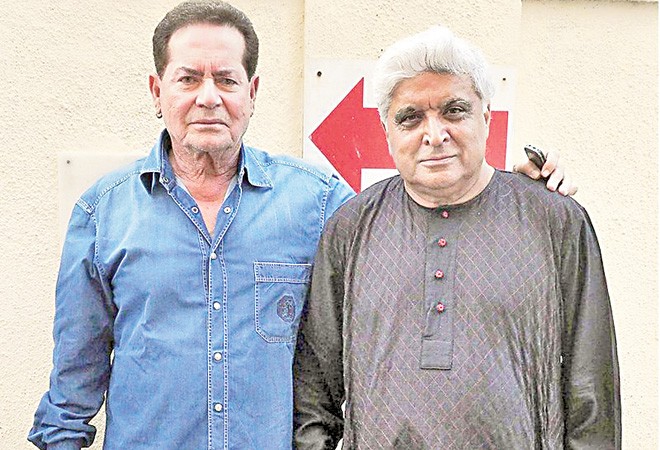 If you compile a list of most memorable one-liners of Hindi cinema, there is a chance that eight of those first ten entries will be from a film that has been penned by the writing duo of Salim-Javed.

In fact, if you widen the search, eighty out of a hundred would come from words penned down by this iconic writing pair. Several of their films were considered blockbusters. Be it the magnum opus Sholay, the wonderful Deewar, the bombastic Kaala Pathar, the popular Seeta Aur Geeta or the ahead-of-its-times Mr. India – all these films had one thing in common: Salim - Javed.

One came from a non-filmi background while the other had a father who was a poet with a communist mindset. According to this book, what made Salim-Javed stay together was the loss of their mothers at an early age. The reason why the role of a mother is a predominant force in their screenplays also has to do with their individual and collective loss.

The duo behind "Mere Paas Maa Hai" came together during the shooting of S.M. Sagar’s Sarhadi Lootera (1966) in which Salman Khan’s father Salim Khan was the second lead and Farhan Akhtar’s dad Javed was a clapper boy. Together they embarked on a journey that elevated scriptwriters to the status of ‘King Makers’ in Bollywood, a previously unheard feat for a writer in Hindi cinema.

This book not only talks about Salim-Javed as a duo but also as individuals: Salim Khan and Javed Akhtar.

Salim Khan was - we are told - famous for his good looks in the ‘60s but due to the emergence of Shammi Kapoor and the continued popularity of veteran actors, couldn’t make a place for himself. He was an avid reader and later in his career tried his hand at writing. When he found Javed Akhtar - a fan of Pakistani novelist Ibn-e-Safi - son of famous poet Jan Nisar Akhtar, things began to shape up fo

As the book progresses, we learn about their attributes and what set them apart from their predecessors. One thing to note is that as writers they were adamant to not change their lines even at the behest of filmmakers who perhaps didn’t see their vision. When scripts written by this dynamic duo were altered, they forced producers to omit their names from credits. Call it belief or arrogance, but their strict rules eventually paid off.

That said, we also learn, thank to this book, that this writing duo was as self-absorbed as film stars of yore. They felt that since writers were force behind the script, they should be treated with respect instead of being treated as munshis. They started the trend of writers putting advertisements in magazines and announcing themselves as the ‘real stars’.

Written by Salim-Javed is not a run-of-the-mill kind of book; it also tells you about the job description of both the writers. Salim used his imagination to make up plots and characters while Javed would add words to the characters as well as polish the screenplay. Their rise and rise and ultimate fall are all catalogued here in a chronological manner. The book tells us about their origin story including how they were picked up by Rajesh Khanna who had a guest role in Andaz (1971), to how they single-handedly revived the multi-starrers, and how they convinced Ramesh Sippy that Amjad Khan was the man for the role of Gabbar and why they come up with the script of Deewar in just 15 days.

They split for good in 1981 just as Shakti was being shot and although Zamana and Mr. India featured them together in credits, both films came after they had said goodbye to each other.

Only a writer who is a film buff would be able to commend Salim-Javed for their ability to make a new story from a couple of old ones. Diptakirti Chaudhuri, who has previously penned Kitnay Aadmi Thay and The Bolly Book doesn’t disappoint as he points out the many references people wouldn’t have been able to guess in the ‘70s; he even quotes both Salim Khan and Javed Akhtar on their inspirations and also conducts interviews of those who were inspired by the master writers.

In an era when Hindi films were 3 hours long, Salim-Javed hardly wasted the viewers’ time in their screenplays.

What happened to the duo after their split is also well documented here. And though many would disagree, in many ways their children who are stars in their own right have immortalized both of these writers.

Facts you didn’t know about Salim-Javed…

*        The two wrote 18 films in 11 years and refused to work with the producer of Haathi Mere Saathi after an early bad experience.

*        After director Prakash Mehra forgot to give them credit in the poster, they had posters all over the city painted with ‘Written by Salim-Javed’.

*        It was Javed Akhtar who helped Jagdeep come up with a Bhopali accent in Sholay.

*        Javed Akhtar and Shatrughan Sinha were drinking buddies before they made it big in films.

*        The two decided to groom Amitabh Bachchan after they saw him chewing gum during a fight scene in Bombay To Goa.

*        They asked producers to remove their names from credits of Sauda, Bhola Bhala and Humshakal.

*        They were paid more than Amitabh Bachchan for Dostana, something Salim Khan had predicted in the ‘60s.

*        Had it not been for remakes of Salim-Javed films, Rajinikanth may not have attained stardom in South India.

Tales from a bygone era