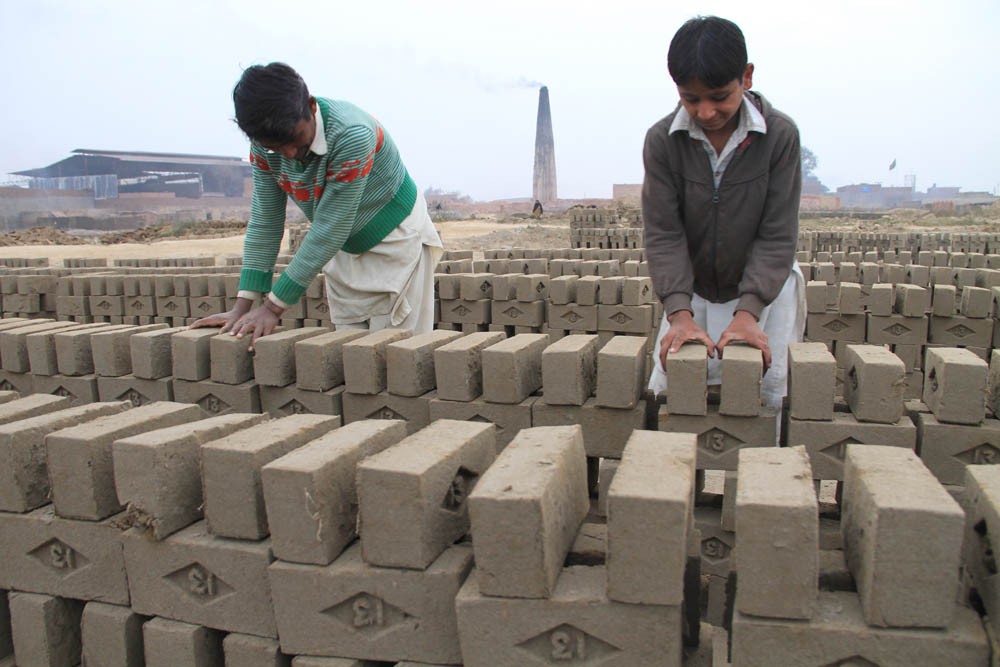 The government of Punjab enacted a new ordinance titled "Punjab Prohibition of Child Labor at Brick Kilns Ordinance 2016" in January 2016 prohibiting employment of children (under the age of 14 years) at brick kilns. The ordinance prohibits owners from employing, engaging or permitting a child to work at a brick kiln.

If a child, over the age of five years, is found at a brick kiln during school hours, he/she is presumed to have been employed, engaged or permitted to work at the brick kiln until the contrary is proved. In the event of such contraventions, occupier of the brick kiln is held responsible and a brick kiln can be sealed for a maximum of seven days. In case of violation of the ordinance, a case will be registered against the owner/occupier and up to six-month imprisonment and fine up to Rs500,000 can be imposed (minimum amount of fine is Rs50,000).

The ordinance not only prohibits engagement of children (under 14 years) on brick kilns but also regulates employment of adults by requiring written contracts and allows for termination of such contracts by either party (on a written 30-day notice). The new ordinance also has provisions requiring brick kiln owners to provide written contract to every worker engaged in a brick kiln specifying the amount of wage, amount of advance (peshgi) and the payback schedule for the advance given. The ordinance further limits the amount of advance to the maximum of six times of the wages of a worker.

Punjab Education Foundation (PEF) has launched a province-wide programme to provide free education to children of brick kiln workers through its partner schools. Labour and Human Resource Department has set up a free helpline (UAN 0800-55444) for lodging complaints about child labour at brick kilns.

Labour Department has indicated that 17,240 labourers were residing at 6,090 kilns in Punjab and the number of children from five years to 14 years of age not attending school was 23,642. The Labour Department, with the cooperation of Literacy School Education, local government and other departments, has provided admission to 22,368 children in the nearest schools. Nearly 201 kilns have been sealed on violation of the ordinance.

Unless proper reforms are made, the GSP-Plus status will remain in danger and our workers will remain engaged in abusive working conditions.

Though this ordinance somewhat effectively deals with the issue of bonded labour, it does not deal with child labour issues. It can help resolve issues of bonded labour by requiring the employer to provide written employment contracts, right to terminate employment to the worker and fixing the advances that can be given to a worker by the employer/occupier at a brick kiln. The granting of employment contract to the workers will also require employers to register these workers with social security institutions and Employees’ Old Age Benefits Institution.

The ordinance will also help in full compliance with the Supreme Court Order of July 2013 in which the court had directed the government of Punjab to register brick kiln workers for social security and consequently the brick kiln owners were directed to contribute 6 per cent of workers’ wages to the Social Security Department.

Under the Employees’ Social Security Ordinance, 1965, the registration entitles workers and their family members to healthcare and medical facilities as well as benefits to family members in case of injury or death at work.

Though it is a commendable step taken by the government of Punjab to contain child labour at brick kilns, it again does not conform to the provisions of ILO core conventions on child labour (i.e. Conventions 138 and 182; both ratified by Pakistan) and has same issues as Employment of Children Act 1991 (adopted by Punjab in 2011). The current ordinance allows engagement of children in brick kiln on attaining the age of 14 years. The brick making process can be hazardous as it involves not only preparing the clay or moulding the clay into balls but also includes an important step of firing the bricks. The ordinance must have raised the minimum age for full time employment at a kiln to 16 years, in line with the provisions of Article 25-A of the Constitution and the corresponding law, i.e., The Punjab Free And Compulsory Education Act 2014.

Now since the minimum age for employment is 14 years while the minimum age for compulsory education is 16 years, the government is inducing children to engage in employment and leave education. The ordinance must also have specified the activities and areas, which may be allowed, with proper protections, for persons over the age of 16 years. The ordinance must also have set the working hours for school going children of brick kiln workers (e.g. two-three hours per day for children aged 12 years and above) after school hours by specifying ‘light work’ as required under ILO Convention 138.

Since this ordinance is promulgated initially for 90 days and the government can enact it as a law on passing of this bill by the Punjab Assembly, it is necessary that the above points are taken into account while placing the bill before the legislature. The current ordinance gives an impression of half-hearted reforms by incorporating the same provisions, which have been criticised by ILO.

Unless proper reforms are made, the GSP-Plus status will remain in danger and our workers will remain engaged in abusive working conditions.