A retrospective analysis of the rise and fall of the don of Lyari in two years, during which he wasn’t exactly the PPP man as he is made out to be 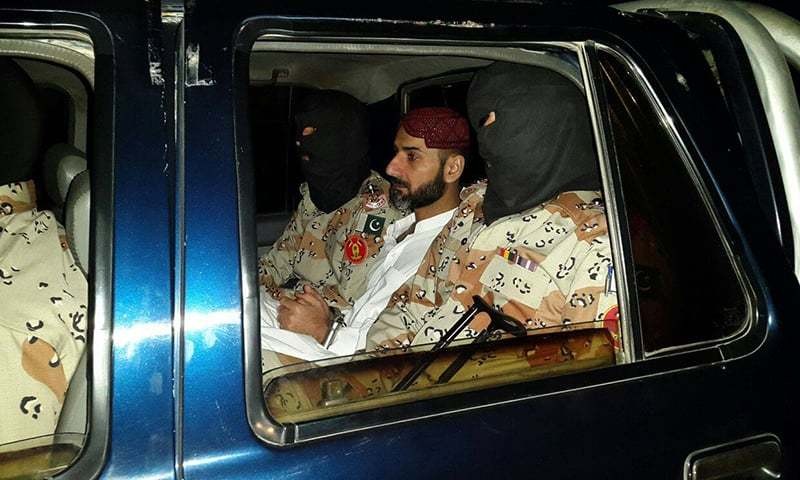 When he was at the peak of his power, Uzair Baloch was the indisputable don of Lyari. His rule was absolute.

The arrest or the announcement last week that he is finally in the custody of Rangers has alarmed the Pakistan People’s Party (PPP) as the media accused Sindh’s largest political party of nursing a criminal -- abetting his excesses to wield power in certain areas of Karachi.

One cannot deny Baloch’s association with the party -- as he took the reins of Lyari’s notorious People’s Aman Committee (PAC) from Rehman Dakait, a known gangster and a personal bodyguard of Benazir Bhutto. And certain leaders of PPP were protecting Uzair Baloch even when he was spewing venom against the party.

But Uzair Baloch’s ascension from a son of a well-off businessman with no criminal record to the don of Lyari is far more complicated. It was the result of dirty politics and power struggle in a city of 20 million people.

From early 2011 to 2012, Karachi witnessed the worst kind of violence in its recent history. Target killings went off the charts. Extortion and kidnapping for ransom become rampant, but the core trouble was the historic turf wars between ethnic groups.

It was in those times that a former home minister Zulfiqar Mirza announced in the media that he had issued more than 400,000 licenses for weapons clarifying that "they are not meant to be used in weddings and parties" but for real purposes. Karachi was bloodied as MQM and (a roughened by circumstances) PPP’s Karachi’s leadership fought it out on the streets. Being a Baloch in an Urdu speaking area was thought of as sentence and vice versa.

In 2011, it all began with extortion. The newly-empowered Amn Committee (PAC) began spreading its tentacles in the city’s Urdu-speaking areas that are already taken-care of by the MQM. The money a shopkeeper would pay, say, to the MQM was once good enough. Now there was another big fish in the scene. With the provincial government’s tactical backing, in the span of a few months, the PAC became unbearable for the MQM which had to protect its turf, so the killings began.

Uzair Baloch had seen off the police brutality in style. He emerged as a saviour and began to have political aspirations. The people backed him. He became so popular that some senior political activists say, the security establishment of that time also found him to be of use.

While the city was sliding into violence, the PPP’s senior leadership was busy running the federal affairs. Then, in April 2012, the PPP launched a police operation to eliminate thugs in Lyari. It basically came to a tipping point where the PPP had to choose between tolerating Lyari’s criminals (who again belonged to the PPP) or maintaining a coalition government with the MQM. The PPP chose the latter.

The people of Lyari were furious as policemen, led by the famous Chaudhary Aslam, cordoned off the area and gave Lyariites eight impossible waterless, powerless, foodless and sleepless nights. Dozens were killed. The people resisted, again backed by certain leaders of PPP’s Karachi leadership. And they prevailed. The PPP’s top leadership in Islamabad regretted the operation but it was late.

According to the Citizens-Police Liaison Committee (CPCL), 2,124 people lost their lives in the city’s violence in 2012, the worst year since records began nearly 20 years ago.

Uzair Baloch had seen off the police brutality in style. He emerged as a saviour and began to have political aspirations. The people backed him. He became so popular that some senior political activists say, the security establishment of that time also found him to be of use. Uzair was a buffer against MQM’s unbridled power in the city but there was another important role he played.

Baloch nationalists protests had begun gathering momentum at the Karachi Press Club around this period. Many left-leaning social activists back then had accused the People’s Amn Committee (PAC) of threatening them for their activities.

"Lyari was always politically very outspoken; fed up of PPP, the people of Lyari initially supported Uzair," says Illahi Bakhsh, a social activist and resident of the area, "but soon people who were more sympathetic towards the Baloch nationalists began receiving threats, even if they had participated in an innocuous Mushaira".

As a Lyari-based journalist puts it: "He was massively used. First by the PPP and then by our agencies. He thought of himself as don but actually he was a mere pawn in the hands of various powers. That’s what gangsters are for; to be used and then discarded."

In hindsight, it is evident that Uzair Baloch was fortunate only for some time -- a mere two years or so. That was the best time of his life and perhaps the worst is yet to come.