Will the veteran all-rounder be able to redeem himself in the World Twenty20 championship in India? 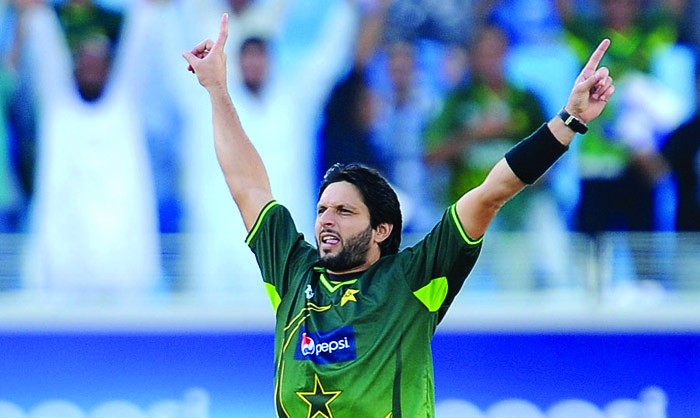 T­he time of truth has arrived for Shahid Afridi. But then it has come many times before for that matter they would say. However, it is different this time around. For this is the last chance he will get at redemption for the recent losses in T20 series, first against England and then against New Zealand. The former was at least close, with Pakistan losing two of the three from winning positions. The second and recent one against New Zealand however, was quite comprehensive, even though Pakistan surprised the hosts with a win in the first game.

But to come back to Afridi. Why the next few internationals will be crucial for him is because they will be his last. And they will be played during the World Twenty20, that too in India.

If he loses, the critics who ask for his head every time he bows out to a terrible stroke, will haunt him forever for he will have been retired. And that, too, on a losing note. And horror of horrors -- in India.

And if he wins… if he wins then he will laugh all through the sunset of his career and party deep into the night. Posterity will record that he lifted the trophy as captain that he helped win for Younis Khan and Pakistan and came so close next year as captain when Mike Hussey destroyed it for him in the last over of a semifinal which till then appeared to be in Pakistan’s pocket.

Though I have never been a fan of his approach which falters more than it works for his team and for Pakistan, especially when he is leading, he has had his moments. But ever since his bowling has been in decline he has seemed less and less valuable to the team. This has no doubt got to him and though already temperamental and quick to anger, especially recently when he had a spat with the Lahore media, the pressure does seem to be getting to him.

I think he is also realizing that he has laid too much faith in Ahmed Shehzad and Umar Akmal judging by his statement after the third and final T20I. It could be that it was meant to take away the pressure from him that he has been supporting them unnecessarily. It was said to be on his demand that the ban on him for the first T20I was lifted and he played all three games.

And there has never been any doubt of the close friendship between them and support for Shehzad that Afridi has provided. But Shehzad’s string of low scores in both T20s and ODI’s but especially in T20s does not auger well for Afridi’s mission to go out on a winning note in the World Twenty20. So it could be that now that he sees the danger in these two letting him down in his final ambition for which he will get no second chance, Afridi may dump them.

In fact this is after quite some time that he has gone three T20s without dropping Sarfraz Ahmed. He has had this thing against Sarfraz its clear. But whether he has been told by the selectors to play him or else or whether Afridi realizes that he does actually need Sarfraz for the rainy day we will not know. But it is a more pragmatic Afridi that we are seeing and hearing now.

What he still isn’t willing to accept is that Sarfraz should be sent higher up the order. After twice holding him back till the last over or two he did send him up at No.6 and saw immediately the benefits. Afridi should now realize that if he is to go out on a high he has to be less selfish and more importantly swallow his ego. And if that means dropping Shehzad and sending Sarfraz up to open then so it must be.

Having said that Afridi and Waqar should also have a long look at Hafeez. Yes he played that fast innings in the first T20 but then not much good came out as has been the case on most occasions with him. In Tests he has developed into a fine batsman but in the shorter format with his bowling no more there are better batsmen than him. In fact Rizwan should be continued with; if Hafeez can get so many chances in his career then surely someone like Rizwan, who is a faster scoring batsman, electric in the field and can come in handy if Sarfraz is injured while keeping then why not play him.

Pakistan nevertheless has seemed rusty in its bowling, despite the fact that coach Waqar has got the best options with him at the moment. He has his favourite Wahab Riaz and the return of Amir has certainly given him firepower he has been missing lately. Imad too has returned from injury. But he must be a tad worried that on more helpful pitches and conditions than he will find in India his bowlers simply gave way. Of course that must be worrying Afridi also to add to his worries with Shahzad and Akmal.

So what holds for the man who is as loved as he is reviled? Will he or won’t he is the question that will carry through to the World Twenty20. Shaharyar Khan has done the right thing by backing him. The last thing we need is to change leadership at this late moment. It would also mean that he vanishes without a trace for he has said that the tournament in India will be his swansong.

Also, who will take charge? Sarfraz is not ready yet and neither is the future captain after him Imad Wasim, unless he leapfrogs the ‘keeper who doesn’t pull much weight at Gaddafi Stadium. So best to let Afridi determine his own fate. There will be many other world tournaments; there can never be another chance for Afridi to redeem himself.