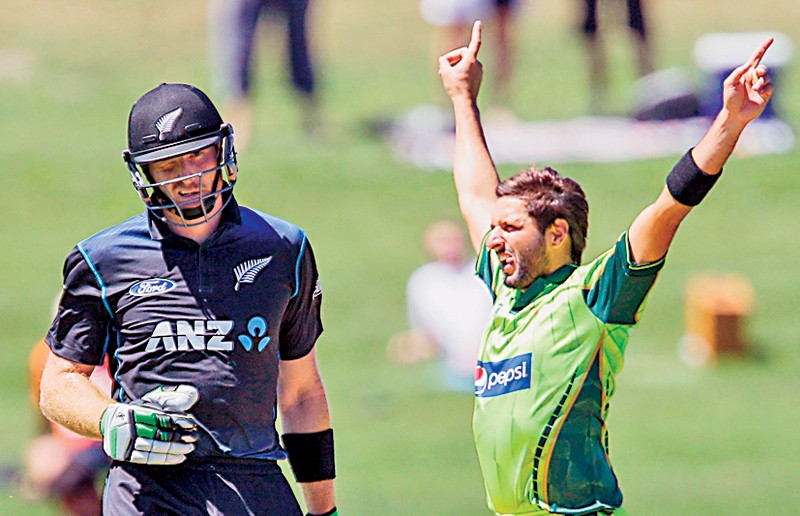 That was when the team arrived with a new captain in Salim Malik, a compromise choice between Wasim Akram and his mutinous colleagues. For those who were not yet born or who too young to remember, Wasim Akram had been made captain for the West Indies tour of 1993 after ousting Javed Miandad, a result of an understanding between the cricket board officials and established team members like Waqar, Mushtaq, Moin and Wasim himself.

But things went awry between these close friends and by the end of the tour they had become disgruntled against Wasim, claiming that he was too domineering and dismissive of them, and had become too arrogant. By the time the home series against Zimbabwe was over and the next tour to New Zealand came about they were not ready to play under him, and so Pakistan appointed Salim Malik to lead, and brought in Majid Khan as manager.

The team had arrived in New Zealand then a disunited bunch with Wasim not on talking terms with some of the players. He kept mostly to himself through the tour but played well nevertheless. By the end of the trip was a happy man and had got along with everyone who had been against his leadership. He gave a lot of credit to Majid Khan, claiming he had brought down the temperature in the dressing room and had bonded the players together.

Now it has to be seen how Intikhab Alam handles the differences that have emerged between those who feel Amir should not be sharing their dressing room and those who feel he has every right to do so. Ironically it is once again a left arm fast bowler, and more than that a young man who is compared with Wasim Akram and considered the man who comes close to emulate the legendry left arm fast bowler.

Apparently the cracks have been plastered over but still there will be ramifications at the slightest provocation. No doubt Hafeez and Azhar have been tacitly bullied into accepting Amir in the side. It was either playing with him or staying at home. No way were the handlers of PCB going to back down from Amir’s selection.

Good for Amir is that the T20s are taking place first. There he will play under Shahid Afridi, who has forgiven him and in fact has stood by him, saying that he was the first to accept his mistake and apologized to Afridi all those years ago. That will make him more relaxed and once he is in that mode he will be able to bowl at his best. Some quick wickets and a few high fives with his teammates will surely lower the temperature and win back friends.

Talking of Afridi and winning back friends, no one needs it more than the man himself. His recent annoyance at a press conference at the end of the camp has made him few friends in the media. This has come at a time when his star is at his lowest ebb for over a year. He had taken the team to the second position in T20 rankings but they have now slipped to third. Of all things they have lost to a lesser ranked England on what is regarded as home conditions; and clean swept at that.

Having said that Pakistan was a few balls away from a 2-1 win in that series; in two of them they threw away either a clear win or threw advantage near the end of the game

Yes, the question must have stung from the reporter as he asked: "Your record has not been as impressive as previous Pakistan Twenty20 captains, do you think there is a need to change the way you are leading the side?"

I personally don’t think that it was a provocative question, though till a few weeks back Afridi’s record as T20 captain had been as good if not better than previous captains like Hafeez and Misbah. Perhaps it was that first part of the question that irritated Shahid, otherwise media would want to know if he is reconsidering his leadership strategy.

But to walk away from the press conference after calling it a low question was not on. He could have easily said that he has a better record or asked the reporter what has been the record of the previous captains, which would have brought out that Afridi has been better. And embarrassed the reporter himself. That would have been a winner. But then that is not Afridi’s style. He is as brash in his verbals as he is with his bat.

The media were nevertheless rightly piqued. You can’t just call one of them something like low life and walk away from a press conference. They were right to protest, though raising slogans outside the dressing room was not the order of the day. And if they had then to just disperse without an apology from Afridi and being indirectly told by Intikhab that Afridi respects everyone, spoke more of their inability to get anything out of Afridi despite the pressure.

All told an unsavory end to the camp and not a good sign for a send off on a tour which has its own challenges. Thankfully both the New Zealand cricket board and captain Brendon McCullum has come on the side of Amir and has said he feels for him. The worst thing for Pakistan would have been if they had both shown antagonism. That would have led Pakistani players to feel that because of Amir they are being put under pressure and not welcomes in New Zealand.

Of course it remains to be seen how the spectators react. They will no doubt pick on the young man when he is fielding at the boundary. The New Zealand players have publicly come out against sledging but I’m sure a few of them won’t let go an opportunity to unsettle Amir while batting or bowling to get him off track.

In that case both Shahid Afridi and Azhar Ali will have to handle the situation with intelligence. The latter more so because he has come out ostensibly against his inclusion in the playing side. Now he has to get the best out of him in the field.