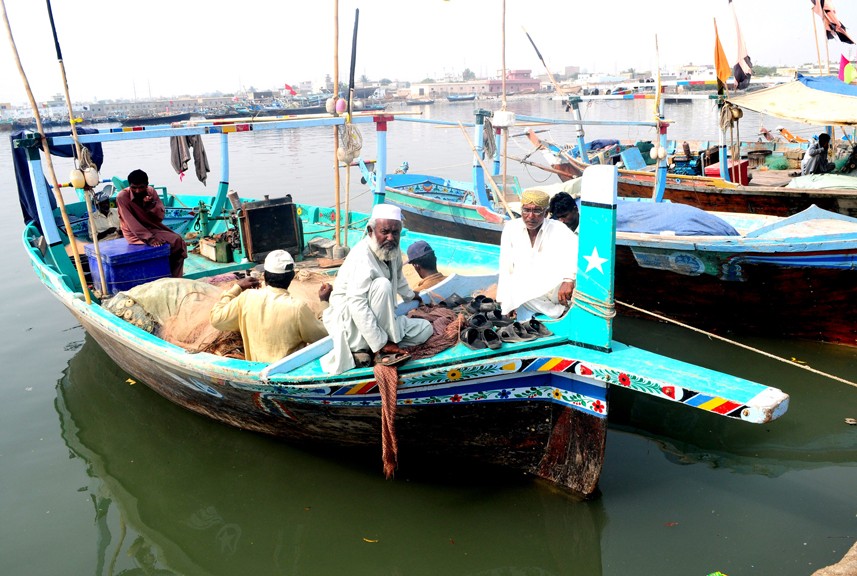 In implementing its capitalist vision of economic justice through privatisation, the federal government has once again begun to process licenses for deep sea vessels under a policy to fish in the Exclusive Economic Zone (EEZ), around 20 miles off the coast in Sindh and Balochistan.

Today, half-a-dozen bottom trawlers, apparently owned by East Asian investors, are parked around the Korangi Fish Harbour. Funded by the Asian Development Bank, its consultants propose the expansion of deep sea fisheries to fund debt servicing through licenses to 100 trawlers. This may seem a mechanism to spare the poor from burdens of taxation but in actuality this is unjust theft of fishers’ livelihoods and their ocean.

The federal and provincial governments have been asked to reconsider this policy. But resistance will bear fruit quicker when advocacy by the fisherfolk receives support from the wider public.

Expansion of fishing into the deep sea is a grave threat to livelihoods of small fishers and marine ecology. Hence, it is a violation of national laws and international commitments. If the provincial assemblies have not approved the policy then it is also a violation of the Constitution. When elected provincial government is ignored, then the federal policy mocks democracy.

In such a situation it is difficult to believe that the government genuinely proposes to strengthen food security, and in particular to realise the obligation to enable the Right to Food. In fact, even the States to which the deep sea vessels belong are blatantly and cruelly violating their obligation, and therefore ignoring their commitments towards UN guidelines for Responsible Tenure and for Sustainable Small Scale Fisheries.

Since the ecology of territorial waters and livelihoods in provinces will be harmed deeply, it is indeed the constitutional privilege of provinces to reject the policy as illegitimate exercise of federal jurisdiction over the EEZ. Provincial and local governments should be urged to create barriers against the deep sea vessels, for instance, by refusing passage of deep sea vessels within the territorial waters.

This note elaborates our fears. It is based on positions expressed in "Ocean Grab: A Primer," prepared for the World Forum of Fisher Peoples (WFFP) in collaboration with the Transnational Institute.

Are we witnessing a local form of global land and water grabs? Mimicking land grabbing, ocean grabbing consists of global processes and dynamics with extremely adverse impacts on people and communities, threatening a revered way of life, cultural identity and livelihoods in small-scale fishing and closely related activities. Fishers and fishing communities must confront powerful forces that are dramatically reshaping existing access rights regimes and production models in fisheries. This process is leading not only to the dwindling control by small-scale fishers over these resources, but also in many cases to their ecological destruction and very disappearance.

Ocean grabbing means the capturing of control by powerful economic actors of crucial decision-making around fisheries, including the power to decide how and for what purposes marine resources are used, conserved and managed now and in the future. As a result, these powerful actors, whose main concern is making and facilitating profit for private capital accumulation, are steadily gaining control of both the fisheries’ resources and the benefits of their use. The global agenda is being replicated in waters that belong to fisher communities.

Some of the key institutions that are paving the way for ocean grabbing have adopted a human rights based language and they argue that their ‘policy reform’ initiatives are rooted in the need for food security for all and poverty eradication. Wolves in the clothing of sheep! However, many examples around the world show that the underlying principle fuelling reform processes is a blind belief in market-based solutions that are in direct contrast to the wishes and demands of the representative of civil-society organisations which uphold the human rights for all.

Ocean grabbing is not only about fisheries’ policy. It is unfolding an array of contexts including marine and coastal seawaters, inland waters, rivers and lakes, deltas and wetlands, mangroves and coral reefs worldwide. The means by which fishing communities are dispossessed of the resources upon which they have traditionally depended is likewise taking many shapes and forms. It occurs through mechanisms as diverse as (inter)national fisheries governance and trade and investment policies, designated terrestrial, coastal and marine ‘no-take’ conservation areas, (eco)tourism and energy policies, finance speculation, and the expanding operations of the global food and fish industry, including large-scale aquaculture, among others.

Resource grabs are taking place in the broader context of changing global economic, financial, climate and environmental dynamics. As a result, a fundamental re-valuation of natural resources is currently under way. This re-valuation signals an attempt to wrest land, water, fisheries and forests and their related resources.

Ocean grabbing is occurring in varied ways across a diversity of politico-legal settings. One common denominator is the exclusion of small-scale fishers from access to fisheries and other natural resources and access to markets through the adoption or reinterpretation of laws, regulations or policies affecting fisheries governance. Throughout the world, legal frameworks are emerging that undermine the position of small-scale fisheries producers and systems, while strengthening or reinforcing the position of corporate actors and other powerful players. Such ‘perfectly legal’ re-allocation processes may or may not involve coercion and violence, but are far from being considered as socially legitimate. Sindh is an example of provincial government proposing a donor-funded fisheries policy that rests upon capitalist, hence predatory, principles.

Globally, three types of mechanisms are attempted. First, small-scale fishers are suddenly denied or lose the legal right to fish or harvest aquatic resources due to changes in legal frameworks that now require them to possess a market-embedded right to fish. The various forms of ‘Rights-Based Fishing’ (RBF) reforms are the key policies underpinning this form of dispossession. Such reforms, that typically allocate defined shares of allowable catch to individual fishermen or fishing companies, are frequently carried out without any meaningful consultation with small-scale fishers. In all countries where similar reforms have been implemented, fishing rights have become concentrated in the hands of fewer and fewer large players, and with more working fishers increasingly becoming aquatic ‘tenants’ paying exorbitant rents to the few ‘sea lords’ or ‘armchair fishermen’ who own and lease the quota.

Small-scale fishers, who previously had direct physical access to their customary fishing waters and to the coastal land that surrounds these or the associated ports infrastructures, are suddenly losing this access. This is happening in different ways. One way is through the establishment of Marine Protected Areas (MPAs) with fishing bans or restrictions, for ‘conservation’ purposes. Spreading rapidly across all continents, MPAs are frequently located around bio-diversity hotspots. Declared as non-access zones, these are often the best fishing grounds remaining for local fishing communities, which see their use curtailed or find themselves displaced.

Another way that small-scale fishers are dispossessed of customary fishing rights is through the privatisation of marine or lake coastal zones. A third way is the location and scale of landing sites and port facilities supported by states and the industry that are exclusively designed to sustain large-scale and export activities, at the expense of local economies and markets.

Small-scale fishers increasingly face sharply dwindling catches due to both overfishing, and pollution and destruction of fishing grounds and other critical aquatic habitats by large-scale industrial players, a kind of pre-emptive exclusion from the resource itself. In this manner, large-scale fleets operating in territorial marine zones ‘capture’ resources from local fishers and the entire chain of people who rely on traditional fishing activities.