400 years of living with Shakespeare 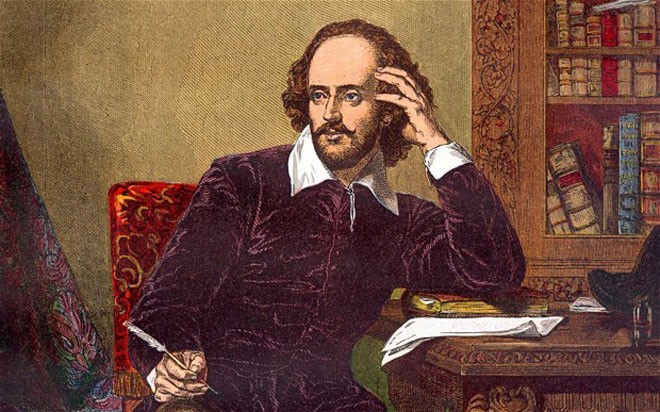 Shakespeare has been revered through the ages. Emerging from humble origins he was at times reviled by fellow playwrights, who looked down upon him as an upstart, unscholarly, and without the trimmings of an education suitable to his literary pursuits. An actor-playwright, today Shakespeare stands head and shoulders above those who sought to belittle him. Adversity aside, Shakespeare was, nonetheless, popular in his times and the criticism that came from his peers was, if not always, occasionally at least, a case of envy.

His team of players eventually played to King James’ court and named themselves the King’s Men. A few years after he passed away, some of his company of actors, including the leading thespian of the group, Richard Burbage, collected his plays and published them in the First Folio. They numbered thirty six. The range in which the bard had dealt in his art included romances, comedies, histories and, at times, a mix of genres. There are also plays of dubious authorship and some collaborations: something that most Elizabethan stage writers practised.

Will’s renown continues to grow and hardly ever has it declined in the last four hundred years. His influence has percolated down the centuries in the English-speaking world where so much of what is spoken now has its origins in Shakespeare. If you do not understand something and say it’s Greek to me, or after a sleepless night say, I have not slept a wink, or feel that someone is saying just words, words, words, you are quoting Shakespeare. Close to four hundred words have been coded initially in Shakespearean texts. It can be said that English would not have been spoken as it is today but for Shakespeare.

The Elizabethan period is the time when early modern English is supposed to have emerged, followed by modern English as spoken today. The possessive as well as the plural ‘s’ was added. Compound words like "gentle" coupled with "man" forming "gentleman" were coined. Prefixes and suffixes were used to create new words, for instance, adding "un" to "necessary" to make "unnecessary". The Bard from Avon was in the midst of this sea change and contributed to it buoyantly.

Writers have continued to be in awe of and inspired by Shakespeare. Keats had placed a bust of the man from Avon on his writing desk, imagining that in this way his spirit would guide him in his creative quest. Walter Scott flattered himself by thinking he resembled Shakespeare and had his own bust modelled to a close proximation of the man he admired.

Shakespeare has had an influence in almost every field of the arts. He has been translated into more languages than any other writer and his work has been the source for over a thousand or more films. He transcends borders and is truly universal; a poet beyond borders.

Agha Hashar was known as the "Indian Shakespeare" and adapted several of his plays into Hindustani, Safaid Khoon based on King Lear and Khawab-e-Hasti on Macbeth being two examples. Tom Stoppard’s existentialist-absurdist play Rosencrantz and Guildenstern are Dead takes its title from a line in Hamlet and views the tragedy of the prince from the wings, where the protagonists, minor characters in the original, are unable to fathom the course of events happening on the stage.

A collection of Shakespeare’s plays is a necessary adornment in most educated households. And even if you have read none of his plays you have heard of the man and probably, some of the characters in his plays.

Shakespeare has, however, continued to have his critics also, even if they were few as compared to his admirers. For a time the playwright G.B Shaw was foremost amongst them. Lionising Henrik Ibsen in the Western world, he took it upon himself to show that the Nordic was more relevant to the 20th century than was Shakespeare. He also sought to place himself centrestage when compared to the bard, and because of the penchant that followed the latter’s name, he coined a word, ‘bardolatory’ to define it.

Leo Tolstoy was also probably not very impressed by the Elizabethan when G.K Chesterton came to his defense and said this was because the novelist did not have an ear for the music of English numbers. And even if T.S Eliot thought that Hamlet was an ‘artistic failure’ it continues to be frequently produced in the Western world and is the most filmed of Shakespeare’s plays.

There are a hundred or more movie versions of the play. One of the latest is Haider, directed and produced by Vishal Bhardwaj, a director who has produced an adaptation of Othello (Omkara) and Macbeth (Maqbool) earlier. He is also one of the jurors in an international festival that exclusively caters to films based on Shakespearean plays.

In the 1990s the Brit actor/director, Kenneth Branagh, made a name for himself for doing Shakespeare on film. He used Hollywood heavyweights to draw audiences and major stars willingly played whichever role they were assigned, such is the prestige that is associated with Shakespeare’s name.

Akira Kuroswa, the great Japanese film director, made Ran, based on King Lear, with the interesting twist of changing the three sisters Goneril, Regan and Cordelia into three brothers in his Shogunate version. He also made Throne of Blood, based on Macbeth. A gorier version of the play was made by Polanski, known partly for his cinematic excesses. Also critically acclaimed, the film recalled his wife’s murder, who had been brutally slain alongwith five other people by the group that called itself the Manson family.

In the 1960s the world of cinema was struck by the Russian Hamlet, which was filmed around the windswept shores of Riga, in the Baltics. Laurence Olivier’s version of the play, with him playing the pivotal role, had set the benchmark earlier. Comparisons were now drawn and many felt that the Soviet version drew out aspects of the play and the protagonist which the earlier had not done.

In the Olivier film, the famous soliloquy, "to be or not to be" had been played as a voice over while the prince brooded in close or mid-shot. This made sense since the speech is an internal monologue and cinema has always been thought of more as a visual medium, where verbosity is more likely to dampen rather than heighten an effect. Anyhow, Shakespeare was the first playwright to use a soliloquy or monologue to voice internal conflict which if anything justified the treatment in the film.

An interesting footnote about the first Hamlet on screen is that it was played by a woman, the famous French actress Sarah Bernhardt, in 1900 and was an early example of adding sound to film.

Other than direct and openly evident lifts and transpositions of Shakespearean plays onto the screen, there are numerous films that use the core of one of the plays to build a narrative without using the dialogue from the plays. Warm Bodies, a vampire story, uses the Romeo and Juliet storyline. The animated feature film Lion King is based on Romeo and Juliet and the subsequent sequel on Hamlet, which also has a ghost in the shape of Simba’s father, Mufasa.

There is also a guns and cowboys version of King Lear called King of Texas. West Side Story replaces the houses of the Montagues and Capulets with the adversity of the Jets and the Sharks in a battle for gang supremacy in a downtown New York neighbourhood. While Gus van Sant’s My own Private Idaho draws on Henry IV. And the Jet Li kung fu film Romeo must Die is, as you would guess from the title, broadly based on Romeo and Juliet.

Franco Zeferelli had made the Burton-Taylor starrer Taming of the Shrew, which was box-office success, before he set out to film Romeo and Juliet. Traditionally, both on stage as well as on film, actors who played the main roles had always been well above the teens that they are supposed to be. Zeferelli turned that around by casting teenagers to play the drama of the star crossed lovers; this helped to draw a younger audience to theatres to view it.

The Bard from Avon has also inspired musicians and painters. Giuseppe Verdi’s famous opera, Otello and Falstaff are a case in point. The Romantics and the Pre-Raphaelites used Shakespearean themes in their paintings while outside the world of art it is Sigmund Freud who used the bard’s plays for human studies, especially, Hamlet.

Shakespeare has had an influence in almost every field of the arts. He has been translated into more languages than any other writer and his work has been the source for over a thousand or more films.

In a world where every nation has a national poet, Shakespeare transcends borders and is truly universal; a poet beyond borders.

400 years of living with Shakespeare